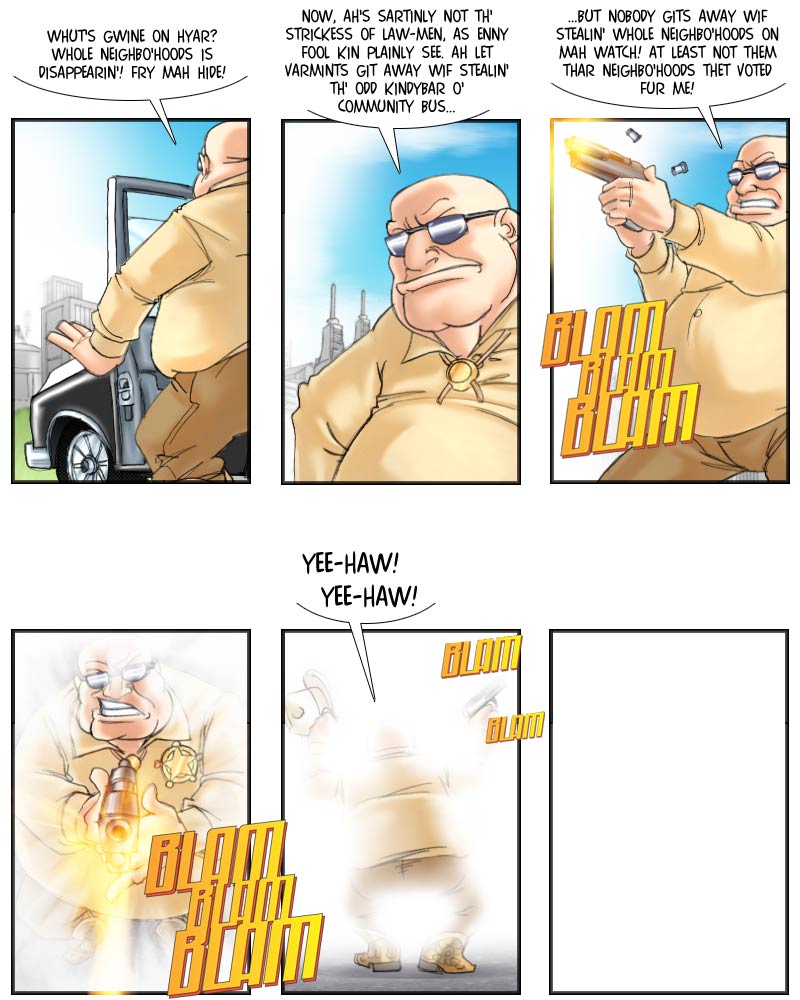 Confronted with the advancing wall of featureless whiteness engulfing Lillytown, Sheriff Ketchum falls back on a flexible, staged response strategy he’s taken from one of his law enforcement textbooks:

Stage 1: Determine if you even know what you’re dealing with.

Stage 2a: If you know what you’re dealing with, shoot it.

Stage 2b: If you don’t know what you’re dealing with, shoot it.

Stage 3: Reload and repeat as necessary.

The law enforcement textbook in question was “Gunfight at the OK Corral”, by the way, which is not necessarily accepted as a textbook at all colleges – but Jebediah liked it so much he’s read a good quarter of it over the years. He likes that 3-step strategy particularly, as it’s easily memorable and usually arrives at the intended result even if he happens to screw up the order of the steps: determine/shoot/reload, shoot/reload/determine, reload/shoot/determine, shoot/determine/reload – the result is more or less the same, save for the waste of a full magazine whenever he ends up reloading before shooting.

In most cases, he’s also pretty satisfied with the result, but in this case the advancing whiteness didn’t appear to be all that impressed. Should probably have used those hollowpoints. But at least he did go out with style…the double ‘yee-haw’ in panel five doesn’t do it justice, though – the sound I had in mind was more like this: Lee’s probably got a lot to complain about regarding this stunt, but I think it’s worth mentioning that the goggles didn’t do nothing. In fact, if they had done less than they did, Lee would have less reason to complain. (It’s just a prejudice that goggles do nothing, anyway – Shonen heroes wear them not only as fashion accessory, but also to protect their eyes. By keeping their incredibly voluminous and spiky hair out of them, that is.)

Most stuntmen have those little rituals they do for good luck before every stunt – I’m not sure what Lee’s complete routine consists of, but the easily observable part seems to revolve around crying, shaking and lamenting that he’s too young to die.