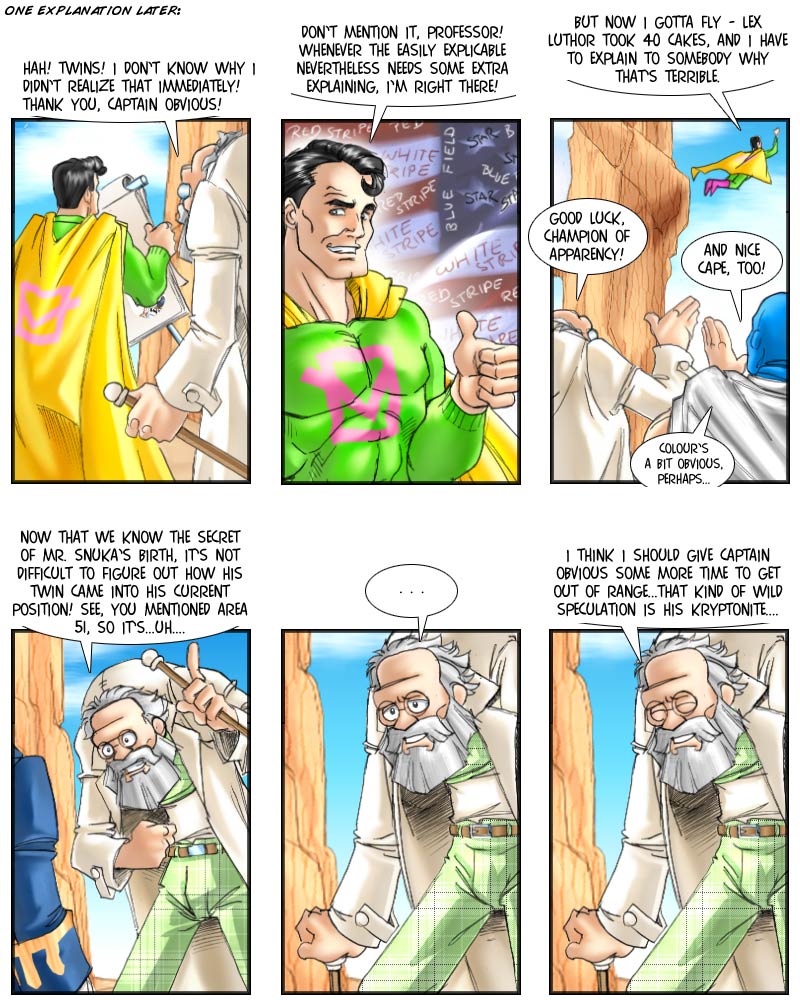 To avoid any insult to the reader’s intelligence, I have left out Captain Obvious’ little Powerpoint presentation – I guess everyone can easily imagine (i.e. it’s obvious) that it dealt with fertilization, twinning, comprachicos and halfed amulets.

Unfortunately, Captain Obvious could not stay behind to help our heroes along, but he’s just too much in demand these days. Although I’m really surprised that there are people who don’t understand that it’s terrible that Lex Luthor took those 40 cakes. Forty cakes! That’s four tens! That’s quite obviously terrible for whoever owned those cakes, and also for whoever was looking forward to getting to eat them. It’s also quite terrible for Luthor to be reduced to that level of petty delinquency, and for whichever poor superhero will have to foil his plan in the end – “stopped Lex Luthor from taking 40 cakes without paying” really isn’t the most impressive thing you could have in your superheroic CV.

But perhaps I should explain why wild speculation – especially conspiracy theories – are like Kryptonite for Captain Obvious (as if that wasn’t obvious). See, nobody misuses and abuses the innocent little word ‘obvious’ quite as viciously and brutally as conspiracy theorists. Properly, a phrase like “A follows obviously from B” should only be used if the intermediary steps of reasoning are so trivial and apparent that they really are not worthy of being laid out in detail. Improperly, the same phrase is used even when “A” and “B” are concepts that couldn’t even logically coexist within the same universe. If you visit conspiracy or creationism websites, you’ll generally encounter two types of statements: those that can only be supported by the most selectively chosen and bizarrely distorted of facts, and those that can’t be supported by any facts at all. You’ll find that the latter type of statement is preceded by ‘obviously’ in more than 70% of cases. Obviously (snicker) these incidents of fake obviousity are not the domain of Captain Obvious – but of his arch-nemesis: Bizarro-Captain Obvious. Now if we only could get people to be honest and use ‘bizarrobviously’ whenever they make that kind of statement…

Anyway, the cat’s outta the bag now, as far as Snuka and his evil twin are concerned. Uh…well, I guess it’s never really been in that much of a bag to begin with, but our friends just hadn’t yet seen that the cat isn’t in the bag – and, being a physicist, the Professor had then concluded that, as long as it is unobserved, the cat must be both in the bag and out of the bag at the same time. More on Thursday.