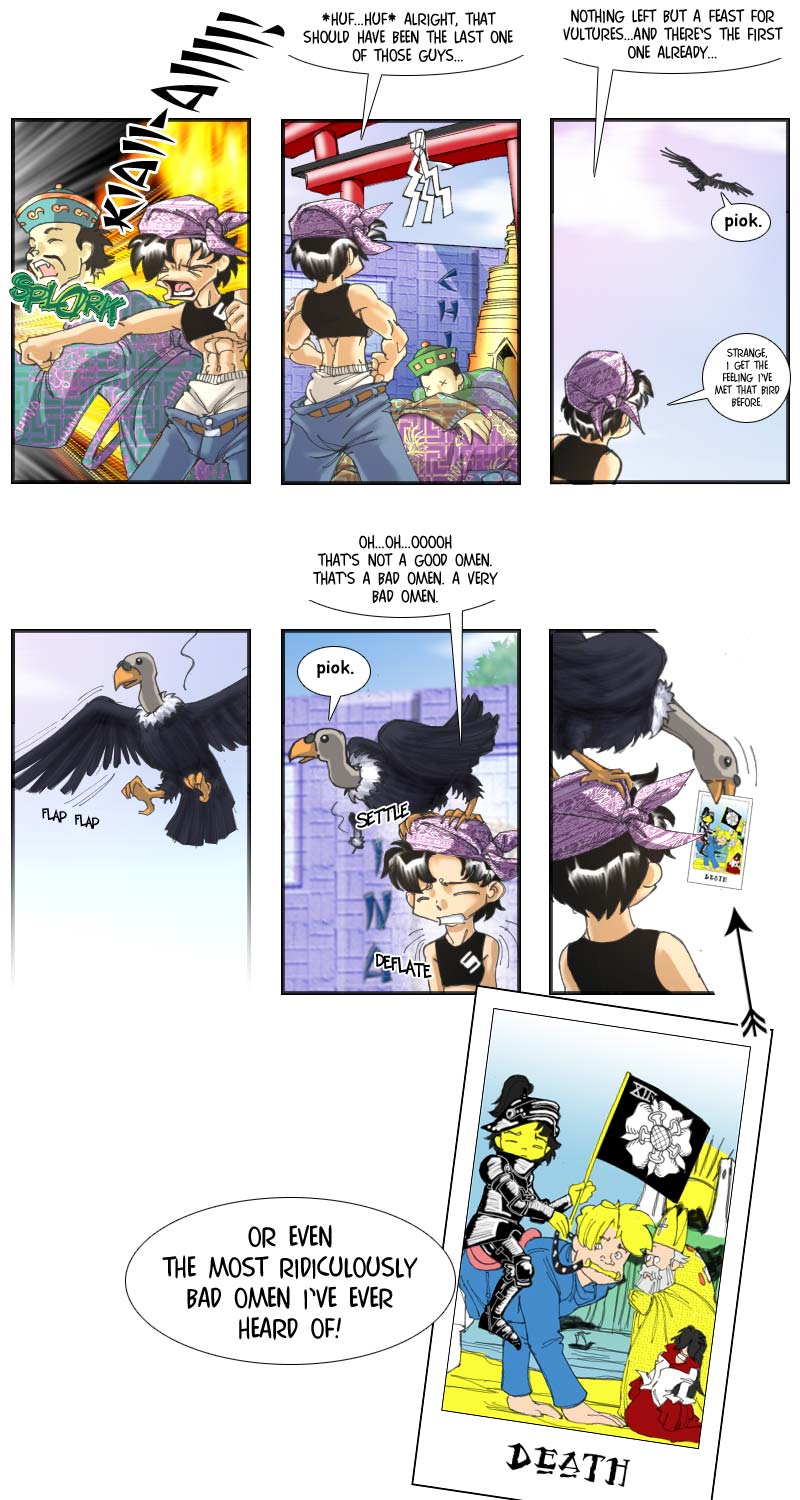 In case you wonder how Snuka suddenly got that muscular in the first few panels, the reason for that is that the actor who plays him is Lee Hung Gai. And if you’re Chinese, and your family name is Lee, the memory of Bruce Lee just demands that you give your best when displaying any kind of martial arts – about 300 % of your best, in fact. And I think Lee (our Lee) managed to convey the right amount of intensity, even if he probably shortened his life expectancy by two or three years in the process. But then, everyone keeps shortening Lee’s life expectancy, so why shouldn’t he get in on the act, himself?

Speaking of short life expectancy, B-movie characters tend to die either suddenly and completely unexpectedly, or after the B-movie equivalent of a long and drawn-out illness: a long and drawn-out series of cheesy death omens. When the surroundings allow for it, a character’s sudden attractiveness to vultures and other carrion-eaters can make for a very convincing death omen, especially when there would be a large selection of other treats available for them. In the case of this strip, the surroundings would not normally allow for the presence of vultures, of course…but vulture was such a popular character in the first chapter I made an exception for him. Let’s just assume it was captured in Egypt, shortly after the end of the first chapter, and brought to the Lillytown Zoo as an exhibit by mere coincidence. Now, it has escaped the zoo amidst the zombie mayhem, and is probably happy to discover a few known and friendly faces in the crowd…

Another thing that often pops up in movies as a harbinger of death is the tarot card of the same name (Major Arcana XIII). While it actually isn’t necessarily a bad omen in the context of tarot itself (as always, its meaning depends on the other cards in the spread) its grim iconograhpy tends to get the desired message across.

Since B-movies aren’t supposed to be subtle, I thought I should better stack several death omens on top one another, and decided that a vulture landing on your head (ignoring a whole heap of dead bodies directly besides you) and handing you a personalized “Death” card would about fit the bill.

As fate would have it, today’s voting incentive also has a Chinese theme. More on Thursday.