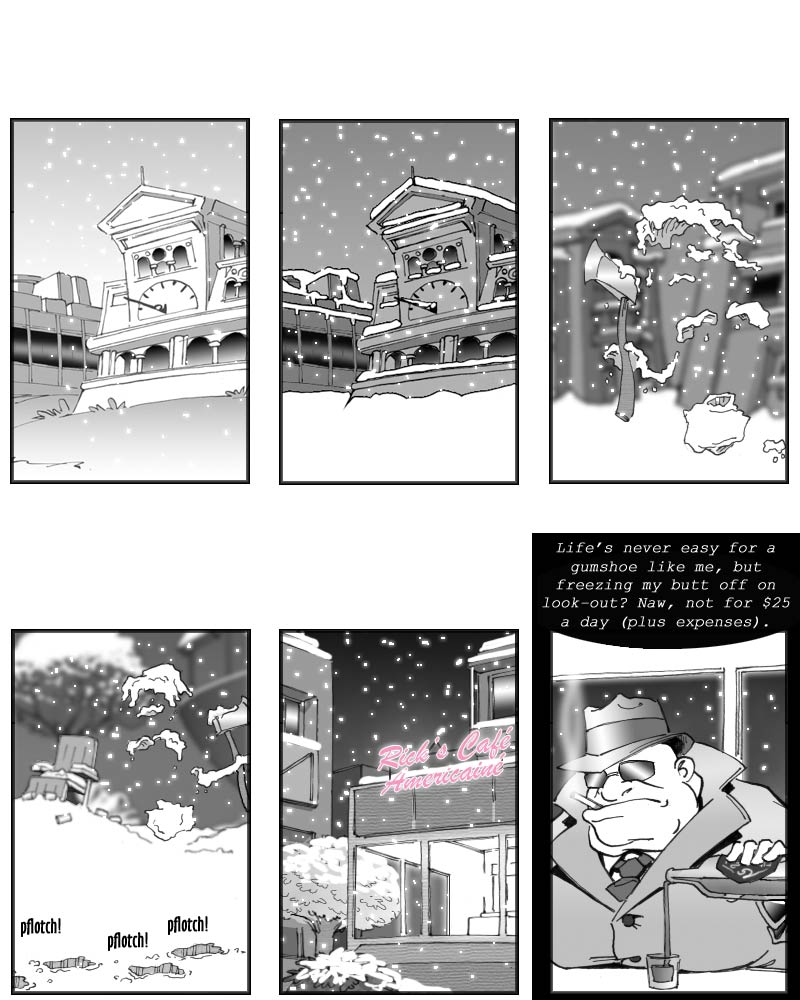 Meanwhile at the University…our original invisible cast member also suffers sudden semivisibility courtesy of frozen precipitation. In fact, even back in the original Invisible Man movie (spoilers ahead =P), Jack Griffin (Claude Rains) ultimately fell victim to the same effect, being shot after his footprints in freshly fallen snow made it possible to locate him. (Interestingly, his footprints showed the outline of a shoe’s sole, while he should have been barefoot at that time.) I’ve heard differing accounts how that effect was created, by the way – some sources claim they were dropping footprint-shaped, white pieces of wood from above, others state that the footprints appeared when a like shape was removed from the stage floor beneath the snow. Of course, bringing you the same effect for panel four required a lot more high-tech – a pencil, a dib, ink, a computer, a scanner and an internet. Yup, those were simpler times, back then. =P

As regards the last panel, well, that’s really the story of Sheriff Ketchum’s life – you couldn’t really claim he’d never make an effort, it’s just that his effort always fall short by that decisive final bit. At least he chose exactly the right bar for his classic-movie mood – if the strip featured music, you could hear Sam play Ketchum’s song in the background. But you’re not missing much – Ketchum’s song is ‘Plop goes the weasel’.

Anyway, while the Sheriff’s vigilance has lapsed, our real, reunited heroes will appear on the scene on Monday – will they be able to catch the no-longer-quite-that-invisible killer, and bring the case to a close? Stay tuned, and please vote.