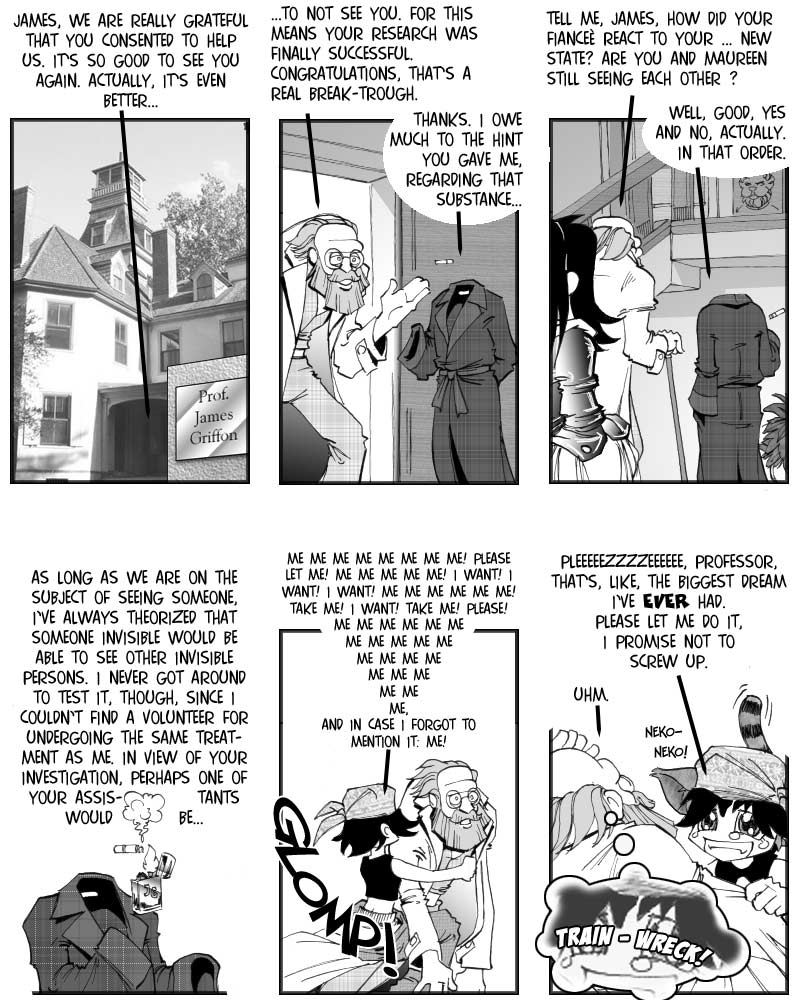 Bud Abbott: ‘The Invisible Man is here!” Lou Costello: ‘Tell him I can’t see him, Bud.”

Proof positive that, on one of my good days, I’m as good as Abbott and Costello on one of their worst ones…that’s something, isn’t it?

The pic in the first panel is royalty-free stock photography from Morguefile, once again. I’m not sure what it is, actually, but it looks just like the perfect kind of place for an eccentric professor.

It takes a tremendous lot of effort to create believable invisibility effects in movies (or used to, before the digital age)…for comics, I found out it’s quite simple: Draw the character like you’d normally draw him, but just leave him out.

As far as Professor Griffon’s theory in panel 4 is concerned, it’s based on exactly the same faulty logic that makes little children believe they can not be seen when they close their eyes. Still, by B-movie science standards, being based on some kind of logic already puts it way ahead of the pack.

Panel 5 shows Snuka in his role as Internet-‘me me’. groan …and on my bad days, I’m worse than Abbott and Costello in their nightmares…

Seriously, though, Snuka did always dream of being invisible – growing up as pint-sized pickpocket in Cairo, there were just too many people that were out to kill him at sight. And note how far he is willing to go for his dream – not only does he show his rarely-seen eyes, he is even employing his as-yet-unseen neko ears and tail. He doesn’t like them to be seen, he thinks they interfer with his machismo, which he considers instrumental to his dating life. Obviously, he hasn’t yet realised that, in reality, it’s catboys that get all the girls. (Not to mention quite a few boys.) In view of this little anatomical anomality of Snuka’s, I think I’ll have to retcon him to being of Semi-Japanese ancestry…Japan, country were eventhe trains have cat ears.

Now the big question is, will Professor Dr. falter under Snuka’s cuteness, or will he be able to follow his better judgement of possible train-wrecky consequences? Find out on Monday, when BMC will return! Please vote – imagine me looking at you like Snuka in panel 6.