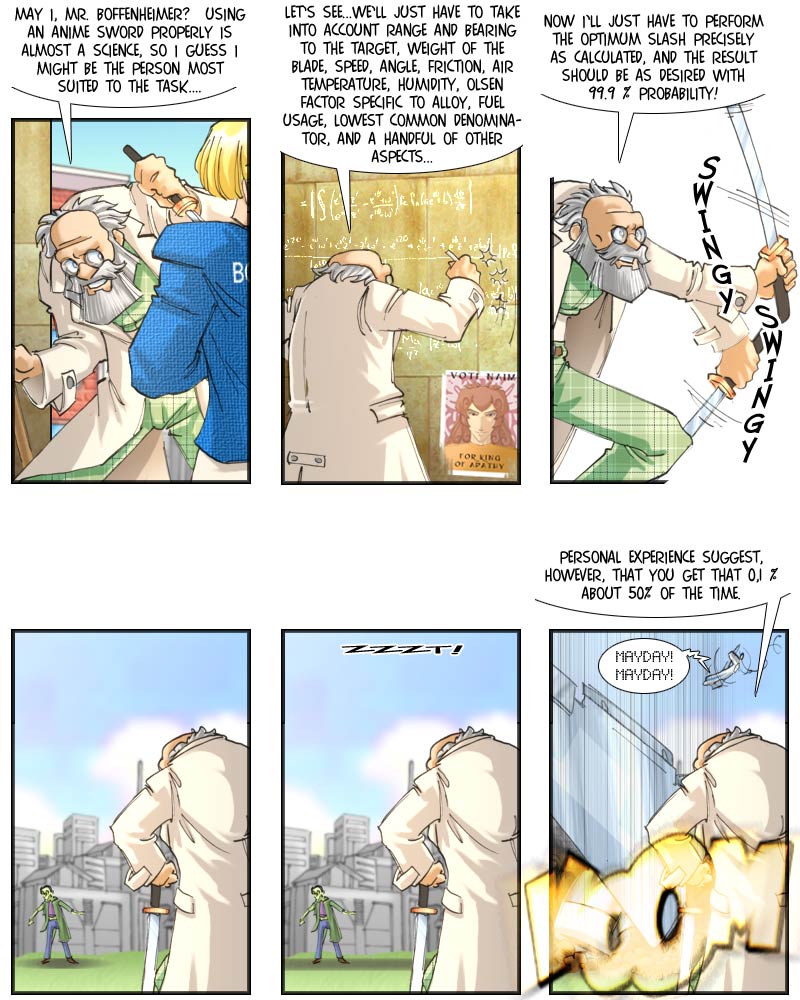 I hereby solemnly promise, on the deity of your choice, that the Professor was the last one to get to try his hand at Snuka’s anime blade in this context. Having Mopey try it just wouldn’t be any fun, since she might actually be able to use it properly – she’s good with bladed/sharp things of all descriptions.

Nobody can really blame the Professor for not arriving at a 100 % precise result, I’d say – he probably forgot to take into consideration that anime physics follow a set of laws quite different from ‘standard’ (i.e. boring) physics. I think the one rule he ran afoul of might have been this one:

Always send a boy to do a man’s job. He’ll get it done in half the time and twice the angst.

The problem being that Snuka doesn’t count as a boy in anime terms, since he’s too jaded, but not angsty enough. Therefore, he’s officially rated as an animal sidekick, which also means the Professor can claim him as a dependant on his tax return. (Don’t tell him, though – it might be bad for his self-esteem, which could turn him angsty, thus causing a(n universe-threatening time) paradox.)

The other mistake all of them have made, obviously, is failing to call out the name of their attack technique loudly while performing it – that alone meant certain failure. Although all of them got their man (or rather, zombie) down, the high amount of collateral damage certainly comes over a bit artless in anime terms. (By the way, the technique the Professor uses here is referred to as “the swingy wibble”, which goes a long way towards explaining why he didn’t call out the name…)

A new voting incentive for today, featuring Mopey, and, as always: More on Monday.