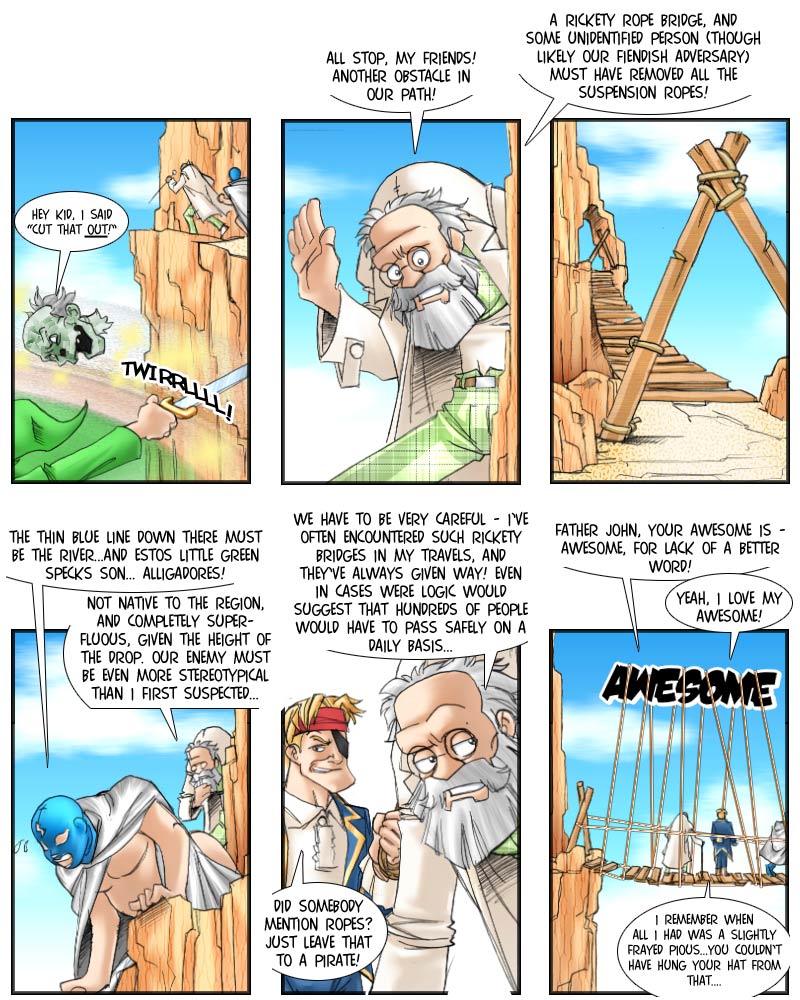 In General, the noun most often used for suspension is “disbelief” – and that goes even doubly for B-movies. Father John Captain McKenzie, however, has the unique ability to use his “awesome” to suspend things from. The reason being, according to my suspicion, that he has derived his awesome from his earlier disbelief in a roundabout way: Disbelieves in his former deity -> Epiphany of new deity -> Turns pirate -> is awesome

This theory of mine warrants further research, in my opinion, but I’m having the hardest of times finding volunteers to experimentally cross bridges suspended from immaterial element of language. Young people are so intellectually incurious, these days. >_>

The whole rickety rope bridge thing was a must-have element, of course – given the geographical setting, no self-respecting B-movie could have left it out. And the Professor is completely right – in fiction, they practically always give out when the protagonists try to cross them, either splitting up or partially eliminating the party (the very rare cases in which they do not collapse usually involve a protagonist who needs to confront and overcome their fear of heights). And while good scripts sensibly restrict the use of primitive, decrepit rope bridges to situations where you could reasonably expect them (access to long-forgotten Inca ruins), B-movie scipts employ them a lot more freely (access to large, flourishing towns in the moutainous regions of Europe. One shudders to think how congested these little bridges must get during the morning commutes…). B-movie script also seldomly forget to add a few crocodiles to the river running below the bridge, even if they often add only marginally to the lethality of the whole situation – in fact, if somebody drops from such a height into a river and survives, it’s likely that all the crocodiles are going to do will be applauding. (Or holding up a scoreboard?)

Was this the final obstacle in our heroes’ path? Find out on Thursday…