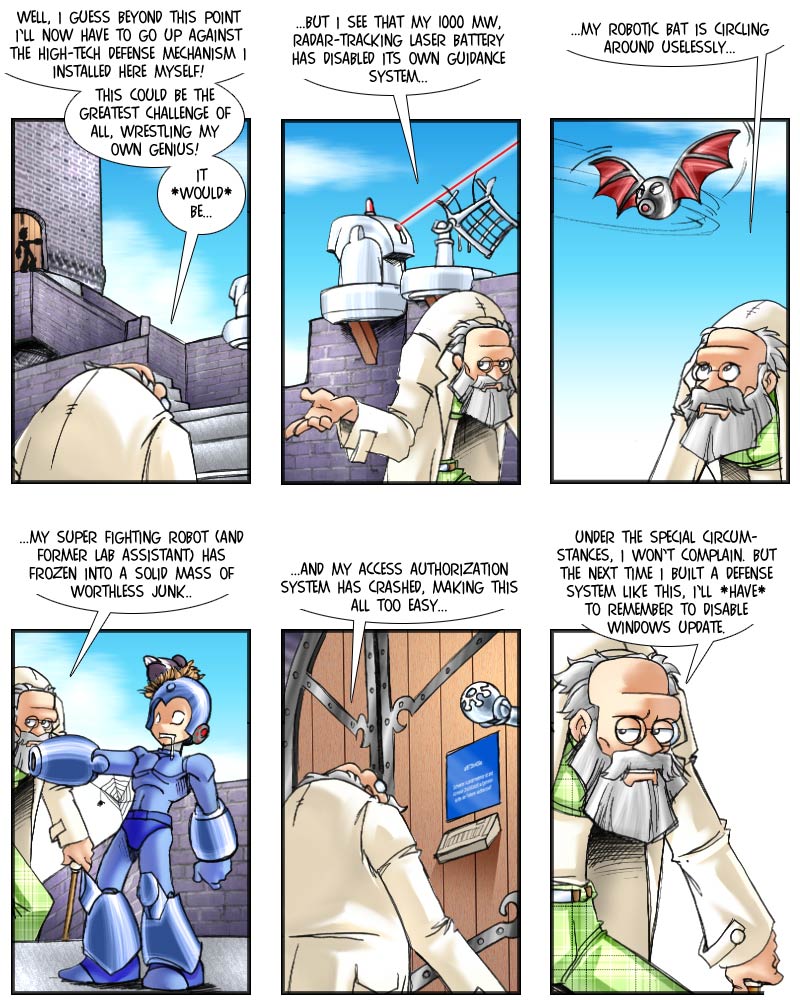 Like any self-respecting B-movie scientist would, the Professor naturally has put up a sohpisticated, high-tech defense system around his back-up laboratory.

Real-life scientists, especially those not involved in research with national security implications, might make do with a simple burglar alarm and leave the rest to local law enforcement professionals – but off course that wasn’t even an option for the Professor, for two simple reasons: firstly style, and secondly Sheriff Jebediah A. Ketchum.

No, a B-movie scientist requires something much more substantial than a simple alarm, something that could deal even with military contingencies, at least whenever it works at all: robots. Fortunately, the Professor is an expert at robotics – not surprisingly, since in any work of B-fiction that features any robots at all, anybody with an academic degree is automatically assumed to be an expert at robotics. (This includes, for example, Dr. from Mega Man X, who transformed the face of the world with his robotics inventions – even if he started out an archeologist just months earlier.) Robotic security systems in B-fiction run the full gamut, from somewhat realistic automated machinegun systems, through lasers, to humanoid, fully autonomous robot soldiers with advanced AI and simulated human personalities, wont to question their place in the universe, develop neurotic behaviour or just go ‘insane’ and start trying to take over … the world! In true B-fiction fashion, there doesn’t need to be any kind of sensible relationship between the price and sophistication of the security system and the value and sophistication of the secrets being guarded – for all some scriptwriters care, a multi-billion dollar security system around a junkyard makes perfect sense.

Such security systems always turn up as an obstacle for the heroes – either because it’s the villain’s system, or because the system belongs to some ally, but has been taken over by the villain, or because the system belongs to some ally, but has unexpectedly* developed sentinence and started following its own agenda. The latter two cases are possible because such systems are supposed to provide security – but their own security apparently is strikingly lax, as a general rule. Villains usually have little problem ‘going in’ (cf. earlier remarks regarding nerdy hackers) and ‘reprogramming the system’ – for one thing, all villains are apparently also experts at robotics (even those not possessing an academic degree), and for the other thing, it seems most B-fiction security systems can be easily reprogrammed with the following method: Locate the following lines: param evil = 0 param good = 1 and change them to: param evil = 1 param good = 0 Sometimes, user-friendliness just gets taken a step to far, I reckon.

Anyway, the Professor, as you can see, went for a mixture of more plausible and less plausible systems, and he was rightfully worried about having to overcome his own formidable defenses – fortunately, one of his bad decisions now turned out to have had positive consequences, with the benefit of hindsight.

*for characters in the plot, not for the audience.