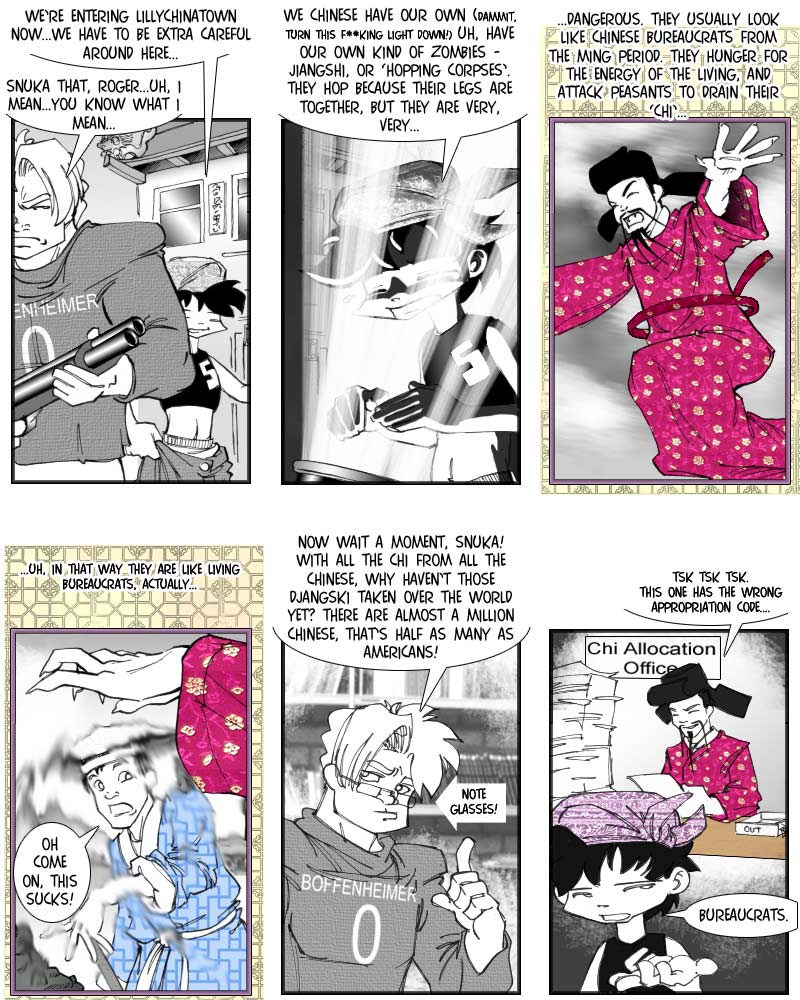 OK, with this episode, we’re back with the actual storyline and advancing the plot (if you want to call it that). The graphics on this and the next few strips are a bit outdated, so to speak, because they were actually created ahead of those strips that appeared the last couple of weeks – this one dates from June 4th, to be specific. I hope nobody minds too much. Kudos for the idea for the last two panels go to Alexander, who helped me out of a tight spot here -thanks a ton.

Since Snuka is essentially telling a ghost story, here, it’s obligatory he gets lit from below – it’s just one of those rules. George could have placed the light a bit farther away from him, though…or just not used on of those 20.000 watt lights. Fortunately, Snuka’s eyes generally don’t let too much light in.

Jiangshi really exist in Chinese folklore, and are variously westernized as either “Chinese vampires” or “Chinese zombies”. They are most commonly depicted as Ming period bureaucrats, and with that parasitic tendency to drain living peoples’ life energy, it’s easily understood why. I have no explanation for why their legs remain together, though – all my sources agree on that aspect, but none offered a more specific explanation, save that it’s somehow signifying death. (Hey, have you noted how Paul McCartney’s legs are togehter on the “Yellow Submarine” cover? =P)

Panel five demonstrates another B-movie rule: glasses make people more intelligent. This works both ways: Intelligent characters always wear glasses in B-movies, and when a normally less intelligent character has to make an unexpectedly acute observation, it’s made more palatable for the audience by having him put on (reading) glasses. In Biff’s case, putting on his glasses practically doubles his IQ. Unfortunately, doubling a tiny number still gives you a small number only. And when it comes to population statistics, Biff generally prefers census data that’s a couple of centuries old, since the smaller numbers are more convenient for him. (China has probably always had a larger population than North America, though, at any given time in history.)

While Snuka’s attempt to warn and prepare his comrades is commendable, he seem to be unaware of another B-movie rule: when some monster is described in a movie, it’ll appear shortly thereafter – next Monday’s update, in this case. ( There’s a related rule concerning legends: When some legend or myth is mentioned in a B-movie as being a “superstitious old fairy tale” it will be confirmed as absolute truth within the next 20 minutes of screentime.) A new voting incentive is also up, by the way.