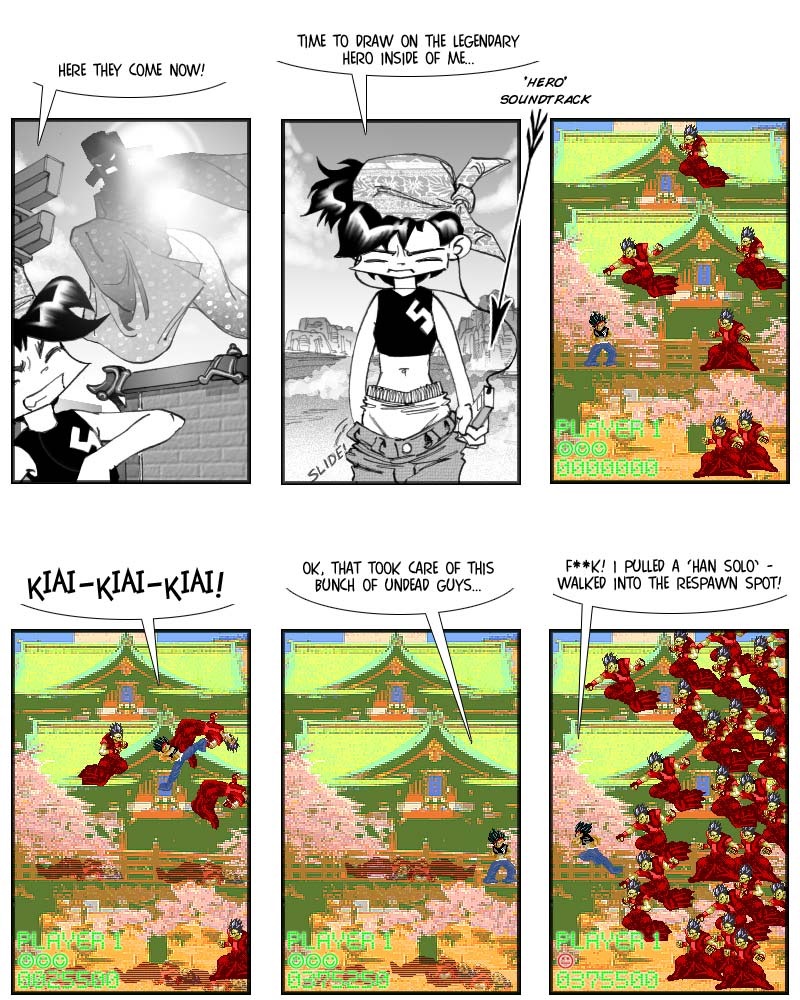 True to form, as soon as their existence has been established in the skript, the hopping corpses make their appearance. In addition to what I pointed out last Thursday, monsters/legends do not only always appear when their existence has been confirmed, but also in any case where it has been *doubted* on-screen. Thus, as soon as any character states anything along the lines of “there is no such thing as vampires” in a movie, vampires are bound to appear shortly.

I’m not sure whether everyone has a legendary hero inside of themselves, but for those that do, listening to some rousing movie OST is probably one of the most sure-fire ways to get said hero out and going. And keep in mind that a hero dies only one death, but a coward a hundred deaths, as is often said. Less often pointed out is the fact that the coward can die his hundred deaths leasurely distributed over 60-90 years of life, while the hero tends to die his single one in a rather aprupt and gruesome manner at age 16 – 22. Of course, as a counterweight to that shortish lifespan, a true hero can count on having his noble deeds set in stone as part of the enternal annals of heroism and human preseverance. On the other hand, nobody ever actually reads those annals – they’re generally boring and pretty depressing.

As the perceptive reader might note, panels three to six were generated digitally – that’s what’s generally done for crowd scenes in movies today, and I thought using modified videogame sprites would be the closest equivalent for the webcomic medium. =P (The unmodified sprites appeared to be from some 16-Bit Dragonball videogame, I’m not sure which, though.) Did I ever mention that I originally toyed with the idea of making BMC a spritecomic? After doing this strip, I now realize that that would have taken a lot *more* effort than the conventionally drawn version. O_o; Well, save for that last panel, perhaps.

As far as panel six is concerned – yup, that was the mistake Han Solo made in Ep. IV: he rounded the corner and walked right into the spot where the stormtroopers respawn. Since Lucas seems unable to stop messing with his old movies, anyway, I’d have a suggestion for a digital alteration to that scene: have the stormtroopers flicker as they appear, and a suitable spawning sound effect.

That’s it for today, save for the new voting incentive, which is also up. More on Thursday.