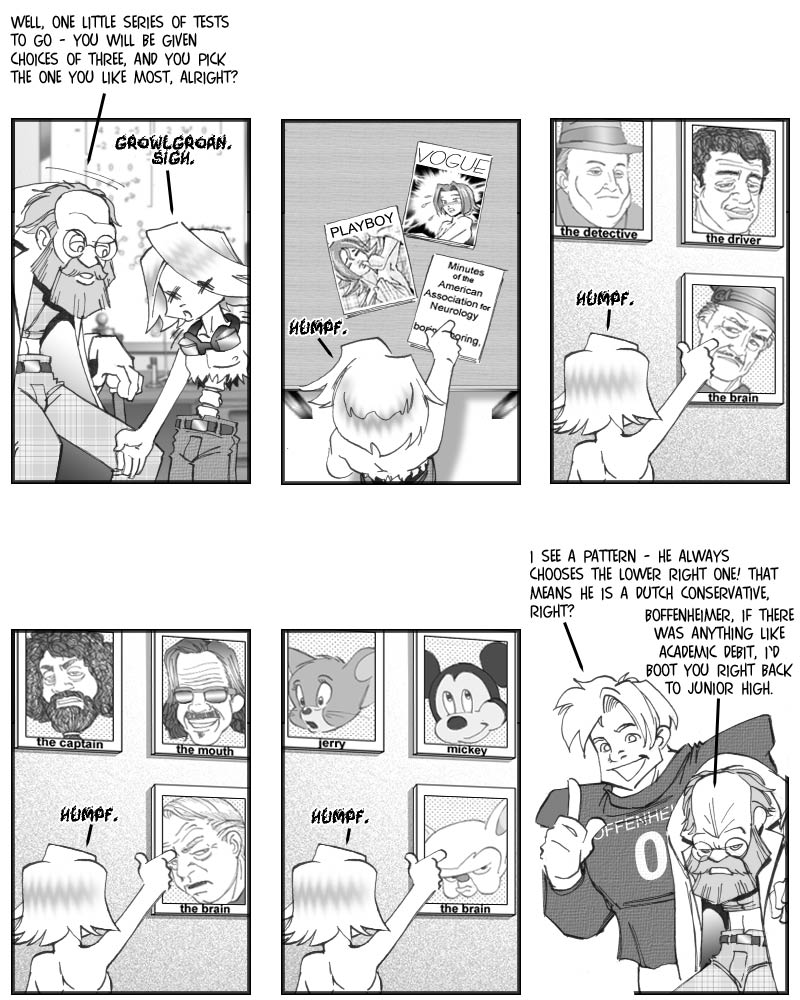 Following up what he found out in Monday’s episode, the Professor initiates another little round of tests to confirm what he already knows – and what anybody else probably knew from the very beginning. As mentioned, the guy is thorough when it comes to this.

I really think he’s being a bit hard on Biff, though. After all, Biff is quite correct in seeing an emerging pattern – it’s just that his conclusions drawn from it are a teeny weeny bit off. Still, I think Biff deserves some credit for even coming up with some conclusion at all. (Yes, Biff’s conclusion isn’t quite all that. If you came up with the same one, think about it some more…there’s…a…more…obvious…one. =P ) (And of course, the Professor should not normally have placed the same answer on the same position in all rounds of the test – but it saved me a lot of effort.)

The Professor has long been lobbying the Dean to introduce a system of academic debit, to parallel academic merits. The Dean fears, however, that Professor Dr.’s exacting standards would cause too many people to leave Lillytown U with academic debts then. Such massive academic debts, in fact, that they would need to spend most of their remaining days reading just to get back to being totally uneducated. There are, by the way, a couple of other education initiatives which have been suggested by the Professor. For example, he suggests that more Ancient languages should be taught in primary school, preferably elegantly integrated into the rest of the curriculum: He wants adding to be taught in Akkadian, and subtracting in Sumerian.

There’s a new voting incentive for today, another ‘truth behind the news’ installment. More on Monday.