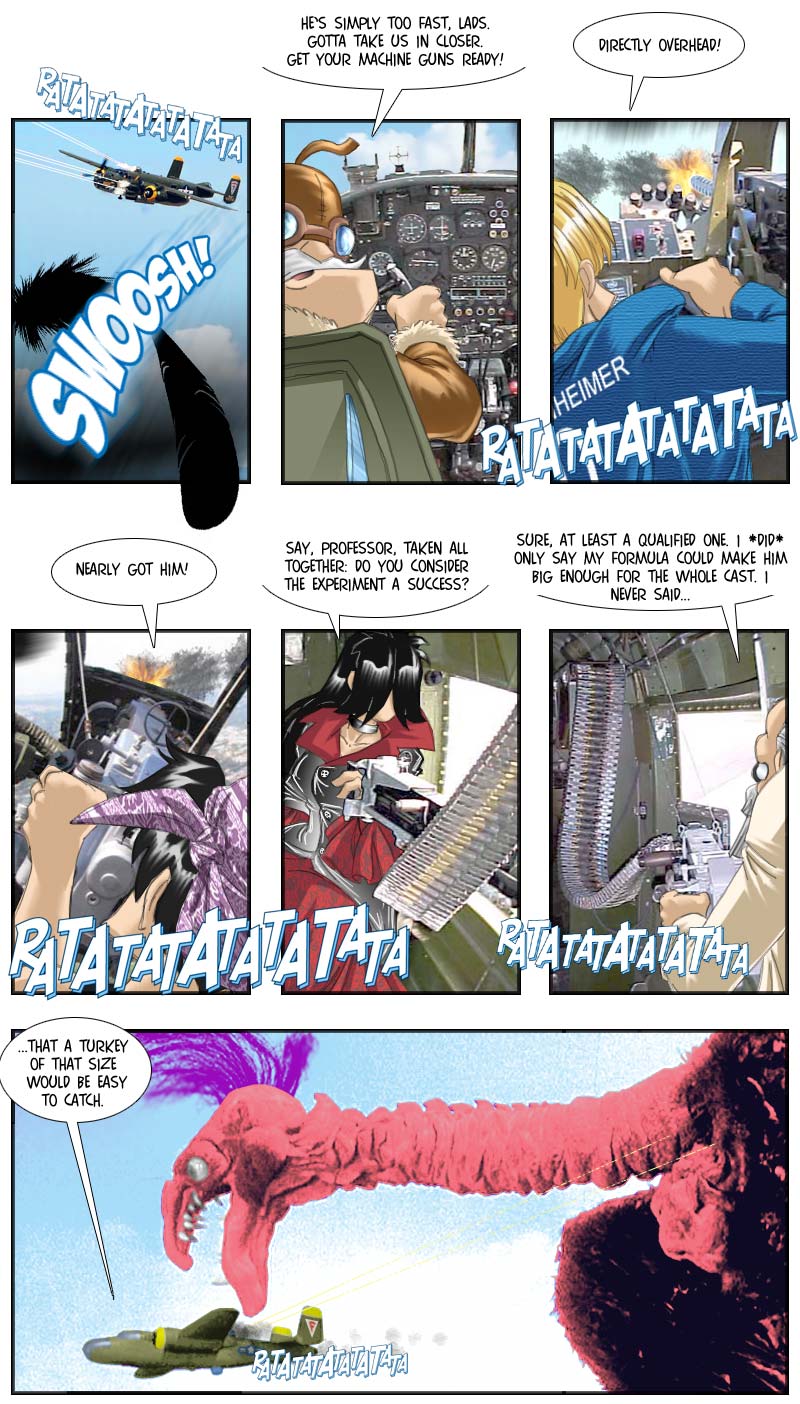 HAPPY (TOO-MUCH-)TURKEY DAY TO EVERYBODY!

Naturally, the first thing that springs to mind when discussing turkeys and B-movies is that perennial classic, “The Giant Claw”:

from which the last panel in this strip is taken (conjectural colouring by yours truly). Of course, it wasn’t called a turkey in that movie – it was called an Anti-matter Space Buzzard. Unfortunately, it seems their model maker was never informed of the not-a-turkey thing. (The thing I love most about that trailer? How they demonstrate that the turkey is “bigger than a battleship” by showing it next to a truck. And I’d really have thought that being bigger than a truck is already impressive enough for a turkey.)

Yup, an anti-matter turkey. From an “anti-matter galaxy millions of light-years away”. Anti-matter is the plausibility lender of last resort in B-movies – whenever something happens that isn’t physically possible by any stretch of the imagination, explain that it somehow involves anti-matter, and draw one “Ignore the laws of physics free” card. And not just the turkey’s flying millions of light-years through the vacuum of space was completely impossible – it couldn’t even plausible fly in an atmosphere, since it never managed more than a rather weak jiggle of its wings.

The background pictures for the other panels came from this site, and are of a beautifully restored North American B-25 Mitchell medium bomber of the WWII era, called Heavenly Body. These interior shots fit the model used in the movie perfectly* – much more perfectly than the “interior” sets from the movie, in fact. Those, as usual, were much too spacious for an airplane’s body. When I came up with the idea for this strip, I planned on spending considerable time looking for suitable interior shots and colouring them – and then I found that complete set of full-colour pics for exactly the right airplane model. I love the Internet.

For those that don’t know him, the grand old chap in panel two is Sir Winston, who appeared in the first chapter.

*OK, nearly perfectly. The “Heavenly Body” is a B-25J, and the model in the movie looks more like a B-25C/D, as evidenced by the placement of the upper gun turret. I know. Nerds. =P