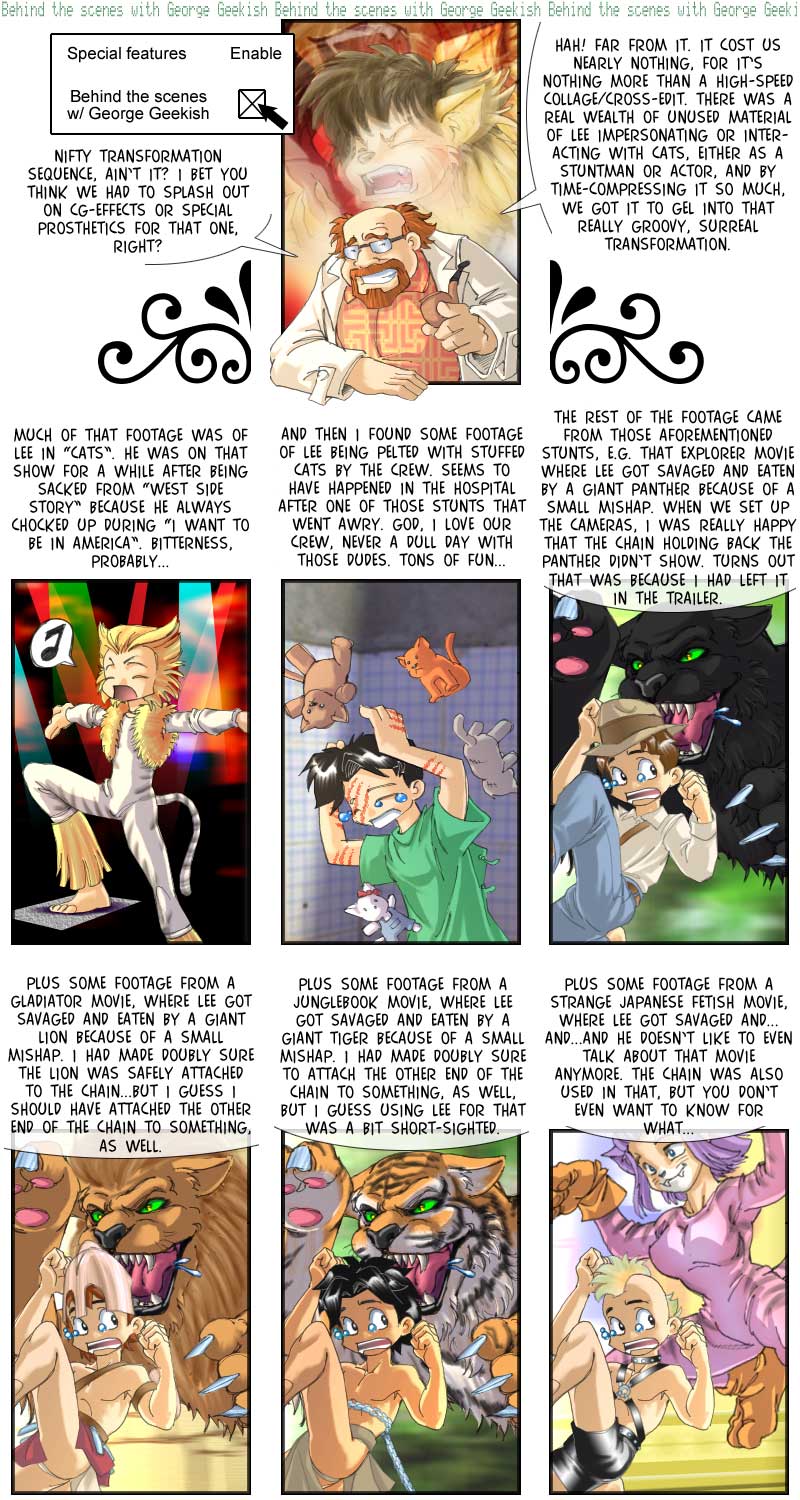 Hot on the trails of the very first BMC strip with twelve panels follows another completely new format: seven panels. It’s more of a sign of decline, though, more specifically my mental decline. Somehow, when I wrote this strip, I came to the conclusion that three plus one plus two plus one equals six. Then, when I assembled the strip, I couldn’t fail to notice that I had about one panel too much. Not too unhappy with it, though, since it gave me more space for text, and it took a lot of text to chronicle the full extent of Lee’s ongoing humiliations.

Big cats have a long tradition in B-movies and would surely be a much more popular choice than gorillas, if they were equally easily portrayed by an actor in a suit. Despite that difficulty, though, a hardworking stuntman like Lee will find ample opportunity to get maimed/eviscerated/shredded by a whole variety of different species of sizable felines. From a zoological viewpoint, big cats are treated equally lopsided as all other kinds of animals in B-movies – often misidentified, generally described as much more ferocious and dangerous than they actually are, and sometimes imbued with almost supernatural abilities. And, as for gorillas, the albinos are always the most dagerous ones in B-movies. In the spirit of that well-entrenchend superficiallity, I’ve decided to save me a lot of effort and actually used one and the same cat for three different species – and that cat was a puma, acutally, since I happened to have a reference pic of one handy.

I also kept recycling Lee’s pose, assuming that the catgirl in the final panel would in no way be any less panic-inducing than the feline predators in the preceding panels, if for completely different reasons. Unfortunately, I have forgotten what the name of that Japanese movie was, but you should be able to find it on Lee’s (keep in mind the name change, though) filmography on various websites. Lee keeps trying to delete it where he can, but most often the editors quickly replace it.

As for George’s cryptic remark in the last panel, regarding the use of that chain during the shoot in Japan…I guess he considers that a bit embarrassing, and tends to cover the whole thing up…I kept thinking long and hard whether I should reveal it here. There is something to be said for protecting sensibilities, after all, and it’s not like people wouldn’t be able to clearly picture the probable use. On the other hand, I think the public has a right to know, and who am I to judge what kind of knowledge is appropriate/acceptable to know for any specific person? So I guess I’ll give it away…just skip the rest of this paragraph if you feel you’d rather not know. *breathes in* The chain was used to lock up the fridge on the set, because George kept raiding it for his midnight snacks.

A sidenote on the background in panel three: I originally had a cleanish white, clearly clinical background there – but then I realized what level of health care the movie company would be willing to provide to Lee, and replaced it with something that looks more run-down and seedy.

That’s it for today, aside from the fact that there’s also a new voting incentive. Thanksgiving special on Thursday.