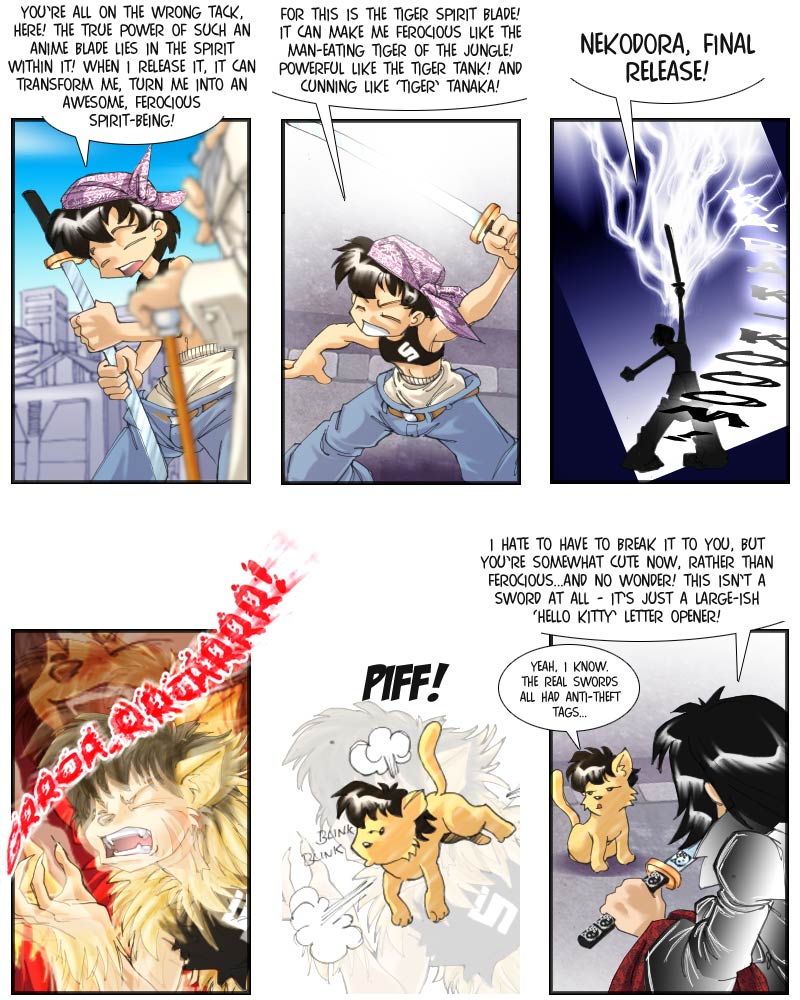 Bah. When I was a little ninja, we hadn’t any of that fancy soul and spirit stuff with our swords. Back then, an anime blade was just unbelievably sharp and utterly inconsistent in length, that was all we had. And we were happy with it. But for those spoiled ninja brats of today, that just isn’t good enough anymore. No, they want all that fancy magical stuff that just makes them awesome and powerful without having to work any for it. Let me tell you, back in my day I had to walk thirtythree miles to ninja school, through neck-deep snow, hiding in the shadows all the way, while constantly fending off attacks by ninjas from rival schools. And that was on a good day. On a bad day, I had to go the whole way twice because I had forgotten to put on pants. *grumblemumblespoiledbratnarutogrumble*

And thus ends the tale of Snuka’s legendary sword, since its public exposure as a mere letter opener will likely cause him to stop showing off with it…you have to admire his courage, though, in that he even attempted to do one of those spirit-transformations shticks with only a Hello Kitty letter opener. While it may be embarrassing to him that the whole ‘tiger’ thing just fell flat like that, there is some small compensation: for the very first time in his live, a girl has called him somewhat cute. And it was Mopey, at that! Coming from Mopey it counts double at least, given her disinclination to say positive things under any but the most desperate circumstances. Must feel almost worth the hassle for Snuka, were it not for the fact that Mopey might at any moment realize that her longstanding plan of having Snuka neutered would be perfectly legal at the moment.

I have to admit, though, that Snuka is a cute cat…you think I should leave him like that for the rest of the series?

And if you think the Hello Kitty people at Sanrio Corp. would never allow any HK product to be as dangerous as a three feet long letter opener, take a look at this. Don’t you know somebody for whom that would be just the perfect Christmas gift? If you do, please keep them away from me.

On today’s voting incentive: Could it be that old age is catching up with the Professor after all? More on Monday.