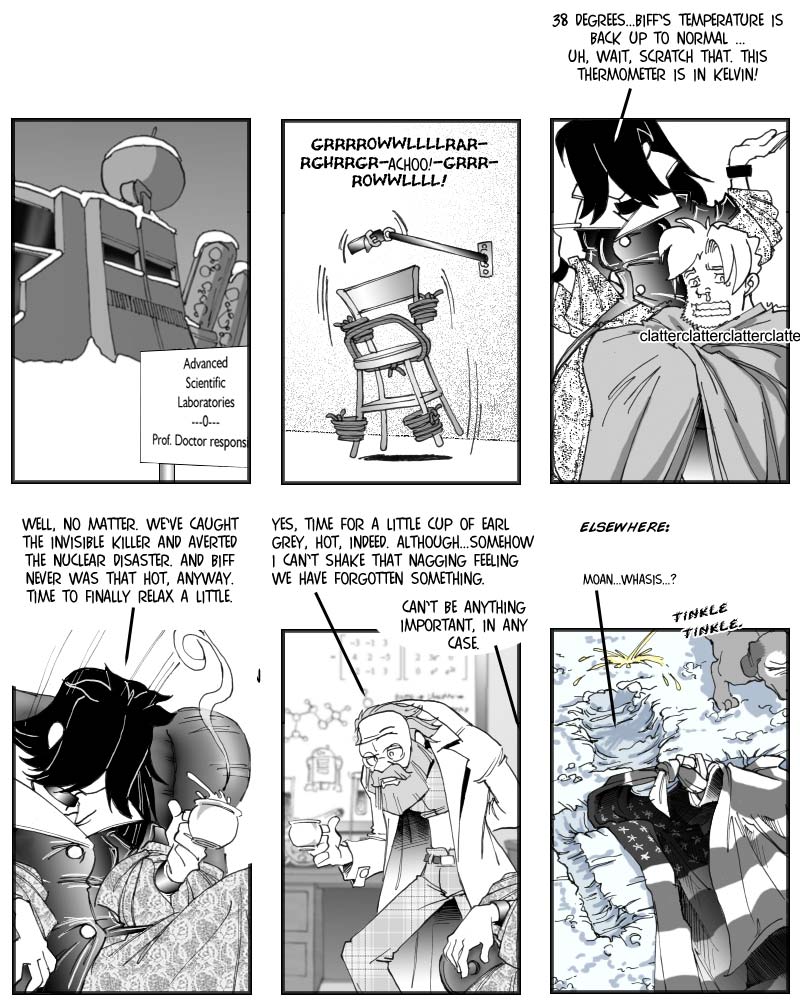 ‘Advanced Scientific Laboratories’ is just the kind of name such facilities tend to have in B-movies. After all, being specific would just limit your artistic license. And adding ‘advanced’ extends your artistic license practically indefinitely – anything considered impossible within the realm of science can still be possible in the much vaster realm of advanced science.

General: “You really think you can stop an 80 ft. high, mutated lizard with that little bubbling gizmo? What kind of science is that supposed to be?” Scientist: “Advanced science.”

Unfortunately, Professor Dr.’s lab doesn’t have a holding cell for the invisible killer. Fortunately, there’s that sturdy eyelet set in the wall, with a leash and collar attached to it. Strangely, it’s in the recreational room.

And there are also comfy chairs, but apparently the whole equipment for treating hypothermia comes down to a thermometer and a blanket. A typical B-movie lab, really.

Snuka experiences one of the basic drawbacks of invisibility today: if you’re invisible, people tend to overlook you. Dogs, however, can still detect you, thanks to their keen sense of smell. Yes, that’s supposed to be a dog in the upper right corner of panel six – it doesn’t really look like one because … because … uh, it got mutated by the water from the reactor. Right. Originally, the dog was supposed to aim for Snuka’s body, but that’s where the flag is, and I didn’t want to offend anybody. A dog urinating onto some kid’s head is probably a lot less offensive.

Don’t worry, though, they are sure to remember Snuka pretty soon. The sudden non-disappearance of valuables just can’t escape their notice for any length of time. More on Thursday, please vote.