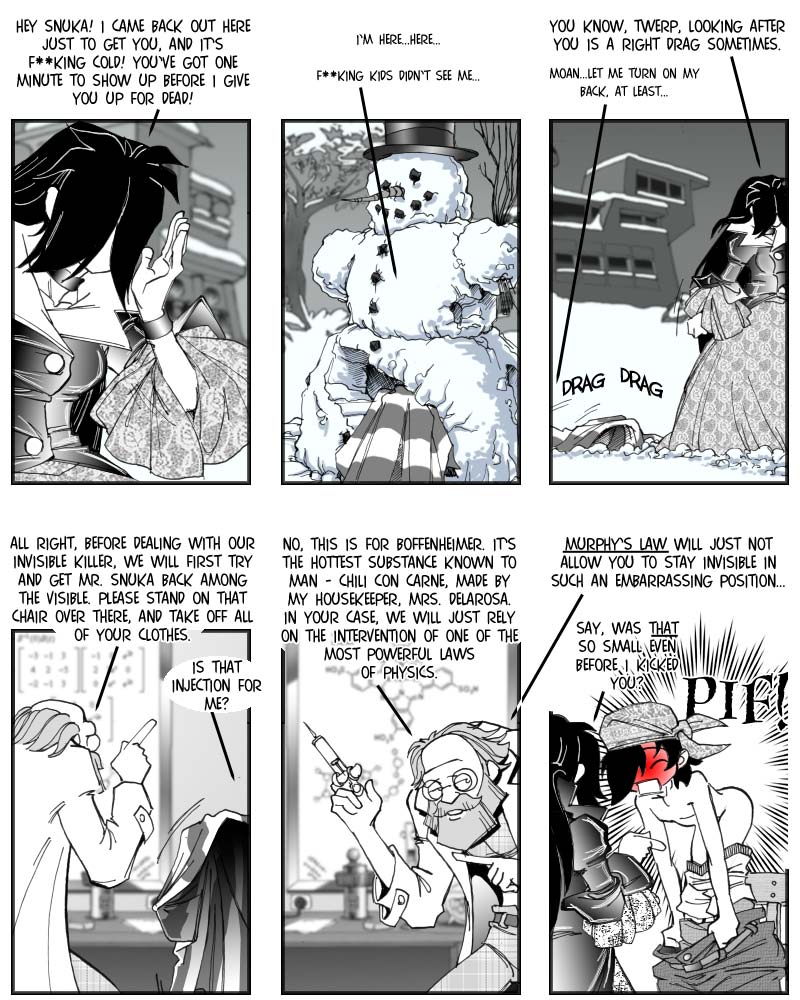 Contrary to appearances, Mopey really cares for Snuka. You might doubt it, given how she only gives him 60 seconds to show up, but let’s face it: for 99,995% of humanity, she wouldn’t even have bothered to go outside, in the first place.

Panel two illustrates what happened to Lee Hung Gai after they carved him out of that giant snowball last week, standing in for Biff – they gave him a blanket and a cup of tea to warm up, and then they shoved him into a different, slightly smaller snowball, to shoot his scene as Snuka. It must really suck to be in Southern California, during summer, and be the only guy around who has a severe cold.

The Professor comes into his own again today, as he cleverly plays out the various laws of nature against each other – knowing, of course, that Murphy’s Law trumps them all. He knew he could count absolutely on that particular mechanism to intervene in this case – the potential for embarrassment was just to great, and drew all of the murphyons in a 12-mile radius to Snuka. After all, what could be worse for a teenager than to have his … uh, physical assets …revealed like that – after just coming in from the cold, and in the presence of the planet’s most sarcastic female being? The other reason for panel six is that director Erik von Strohhut desperately needed to get ‘a little bit of skin’ into the movie – and all actors, save Lee, had contracts that guaranteed them extra pay for nude scenes.

And I had to introduce, or rather allude to, another minor character today: Mrs. Delarosa. Just demonstrates my lack of foresight in making the Cafeteria chef, Mr. Neibiesler, be German. You can say a lot about German cuisine, and perhaps even more against it, but it’s definitely not overly spicy or hot. Tex-Mex to the rescue. But having a housekeeper also suits Professor Dr.’s absent-minded scholar/chaotic scientist image, so no harm done.

As far as the question of invisibility and clothing is concerned, let me recapitulate how that works around here: All the clothes Snuka wore when turning invisible turned invisible, as well. His flag-cape remained visible, because he put it on after he already was invisible. And as soon as he takes his invisible clothes off, everything turns visible again, because the universe just can’t stop itself from making him be visible in that situation. Makes perfect sense, doesn’t it?

There’s a new voting incentive up today, the logical sequel to the last one. More on Monday.