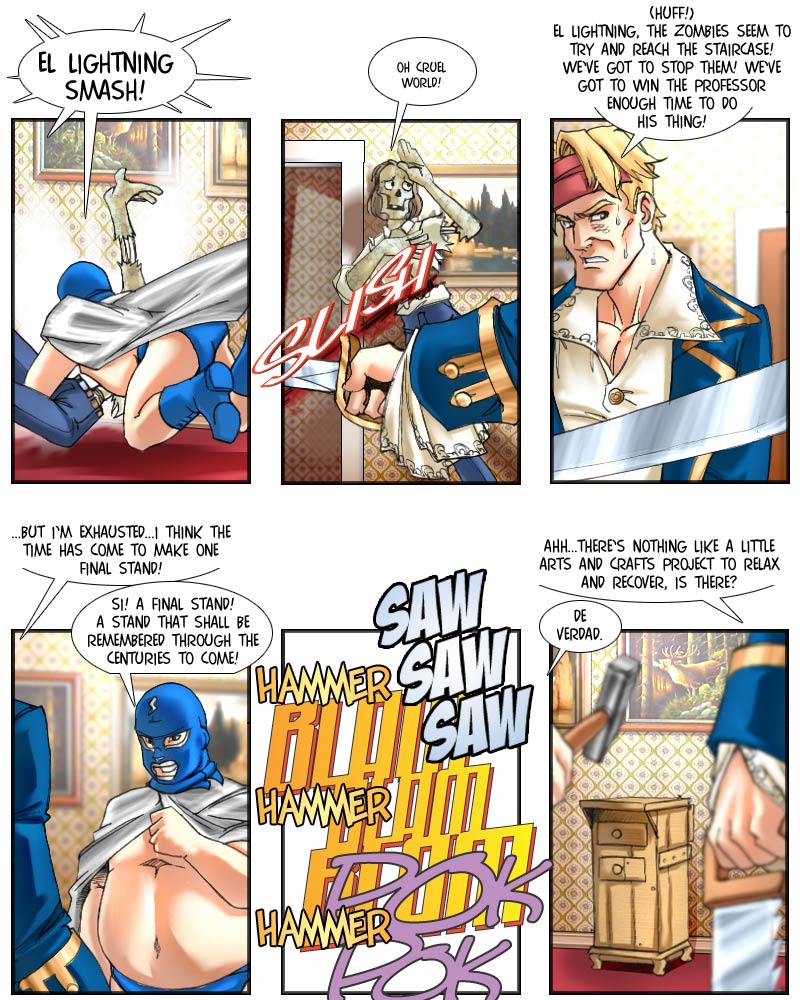 Realizing that they are vastly outnumbered, and that their situation is hopeless, Captain John Father McKenzie and El Blue Lightning follow the proper protocol for the situation: they decide on delivering one final, heroic last stand.

I, personally, have always wondered why somebody would start building furniture in the midst of a battle – but the annals of military history are full of such descriptions: Thermopylae, Masada, Alamo, Camaron, Little Big Horn…so there must be a reason, right? Perhaps it is, like Father John states, merely a means to relax and recover a bit, but that theory wouldn’t answer one crucial question: Why is it always a stand? Why do we never hear of soldiers delivering a last wardrobe, or just a last kitchen utensil rack? When the battle is hotly contested, and wood is scarce in the region, why not go for a last crocheted oven mitt for the sake of simplicity? Unfortunately, there is usually nobody left alive after the battle that could answer that question (and the stands themselves also seem to never survive – at least I’ve never seen one of them in a museum). Since I have no experience in warfare and little in arts and crafts, I thus had to simply accept the traditional paradigm, and had our heroes go for a typical little bedside stand, improvised from the materials that would be readily available to them…let’s hope it does them some good, somehow.

A short note on panel two: Yes, sometimes even trained, renowned Shakesperean actors find themselves reduced to having to work as an extra in a cheap horror movie, just to make ends meet. It takes swallowing of some pride, as you would guess, but their pride in their craft will always shine through nevertheless.