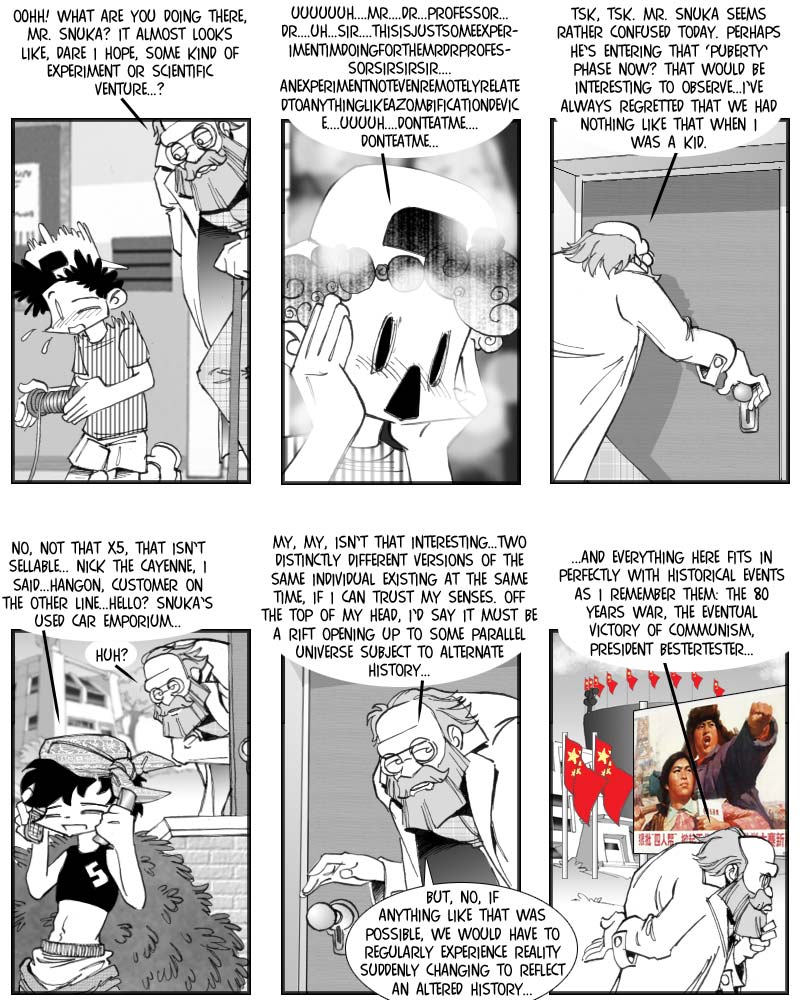 And now the Professor has blown his chance at discovering the big secret, as well. Take a note, however, how he doesn’t fail as abysmally as the others: The plot contrivance he mentions in panels five and six is not the one in action here, but as cheap and illogical. It would have required a slightly different set-up, though: When you’re using the good ‘ole ‘parallel worlds’ spiel, you have to start early with having oddities and incongruities pop up, then add more and more as you build up to the shocking and tragic finale…and then you reveal that it all was an alternate reality at the very end. That’s also the point were the audience hates you with a burning passion (i.e. a passionate wish to burn you).

Don’t worry, though, as I said that’s not the contrivance employed here – the one used here is as implausible and ridiculous, but a lot more venerated. Examples of its use can be traced to Ancient Rome, in fact. And I don’t think I really have to spell it out at this point, do I? =P

I know that many people think puberty has been a (sad) part of the human experience since the beginning of time, but that’s actually not true. The Professor is absolutely correct in what he says in panel three – up to the middle of the 20th century, there was no puberty. People were born as something resembling a small monkey, and stayed that way until suddenly turning into a fully-grown, adult human being at age 12. The traditional way to celebrate that momentous date involved a prearranged marriage, a night of passionate love-making, then heading off to some war in the morning. Then somebody came up with the idea that, rather than sending people off to fight bloody wars in some far-off country (involving very costly transportation), you could give people something called hormones, and have the war take place right there within their own bodies.

As far as the events mentioned by Professor Dr. in panel six are concerned, most of them will disappear from his memory and history as soon as the time-flux is over its little hiccup. Fester Bestertester, however, is indeed President of the United States in *both* realities, although he goes by a different name in one.

Since the little plot secret has survived a triple assault without being lifted, we can now move on with the plot on Thursday. Please vote.