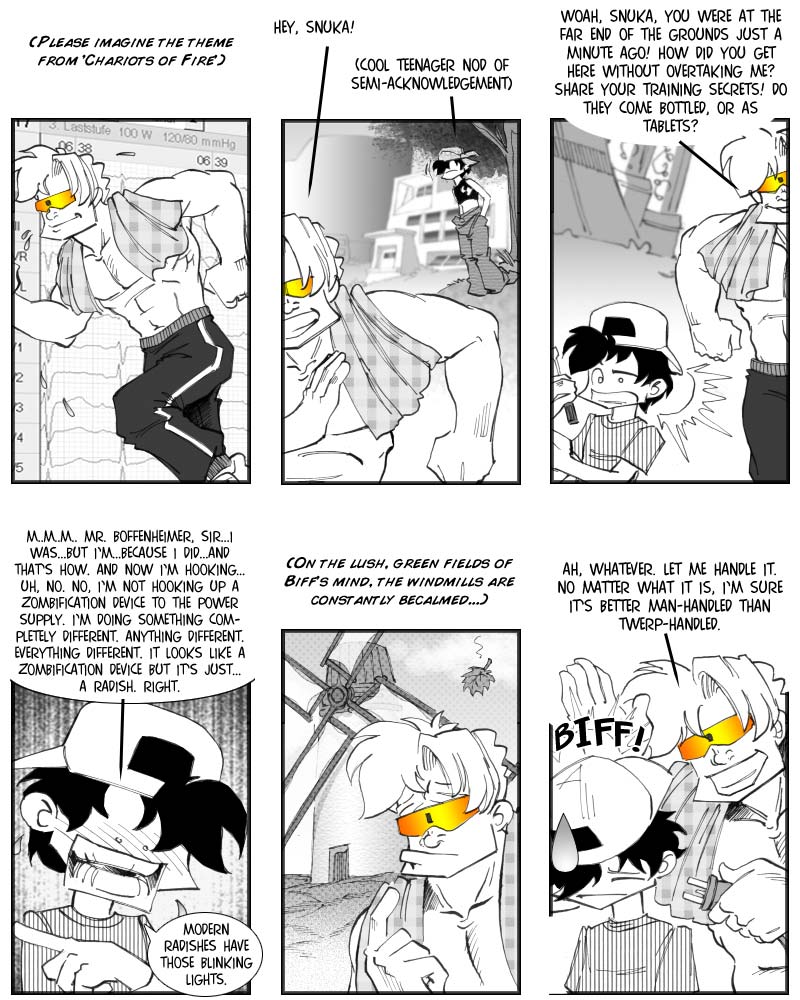 On Monday Mopey blew her chance to make a momentous discovery, and now it’s Biff’s turn. The result is, predictably, identical – but I doubt anybody’s money was on Biff, anyway. In B-movie scripts, the most dim-witted characters occasionally get to make the most startlingly lucid observations, but not this time. If anybody’s interested, Biff’s silent reasoning in panel five runs like this: 1. That strange gizmo doesn’t look like a radish. 2. But it could be a zombification device. 3. Snuka says a zombification device looks like a radish, however. 4. Yet I don’t know what a zombification device looks like, so I can’t challenge that statement. 5. In conclusion: The strange gizmo is a radish.

This episode also gives Elijah McGuire, the actor playing Biff, a chance to fulfill his contractual obligation to appear shirtless in at least one scene. The producer thinks that that particular aspect is very important for the characterization, since it gives him a chance to see actors strip during casting allows to demostrate how Biff is a healthy, sporty, all-American guy. Note: This was shot after Elijah got his breast implants. Did pay off, didn’t it?

In panel six, Biff covers another B-movie obligation, or perhaps it’s even an obligation regarding movies of all kinds: the male lead must always treat all younger characters condescendingly, no matter how much they are his intellectual superiors. I think this is done to allow younger audience members to identify better with their peers on the screen – by sharing the same feelings of loathing and hate for all grown-ups. Speaking of loathing for grown-ups, a real movie teenager will never reciprocate when greeted enthusiastically by an adult – the most vivid reaction allowable is a slight, cool nod, which must be carefully measured to allow it to be alternatively interpreted as just a random twitch.

As regards the metaphor in panel five, somebody might object that it doesn’t matter whether the windmills are becalmed while the fields are still green, because you don’t actually have anything to mill yet. To that I say: Aack. Thbbbt.

Finally, a new voting incentive goes up today, another installment in the ‘truth behind the news’ series. More on Monday.