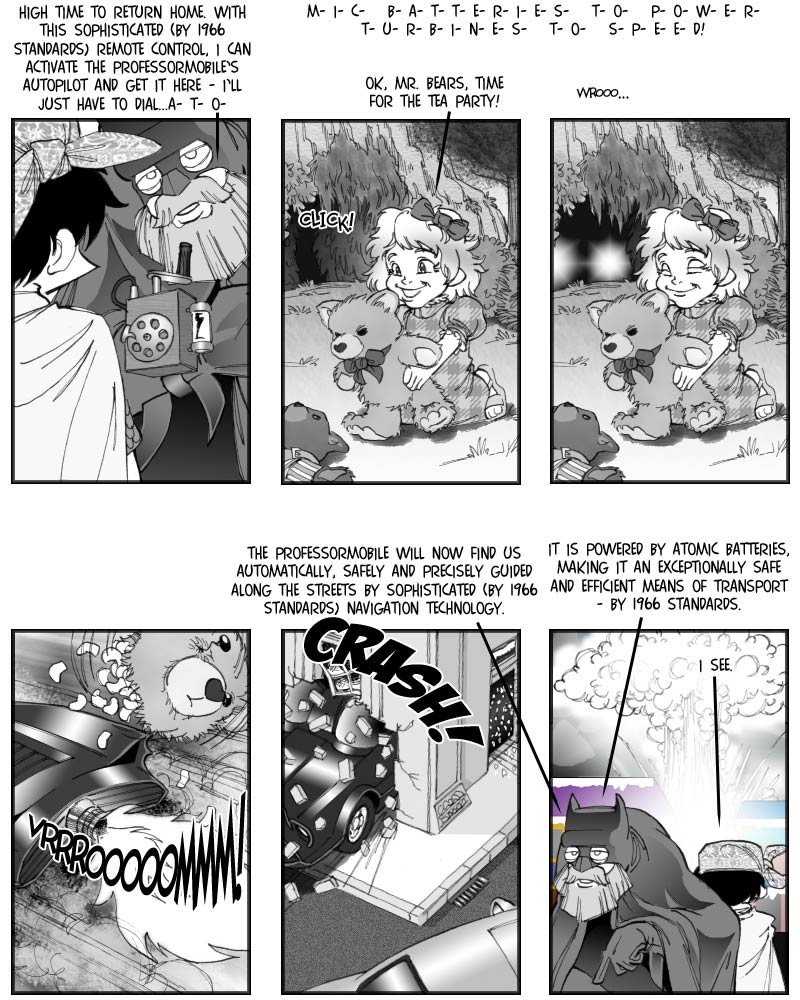 Well, there was just no way to wrap up my little excursion into Batmania without an appearance by the Batmobile, especially since the one created for the 1966 TV serial was one of it’s redeeming features. There are whole websites devoted to nothing else but that particular vehicle, and, even today, people drive around in replicas.

But even as a kid I didn’t manage to extend my willing suspension of disbelief to fully cover all of the Batmobile’s fantastic features. The remote control appeared especially far-fetched to me…I could imagine how Batman could somehow call the Batplane to him via remote, but I just saw no way how a car was supposed to drive around by itself with all those pesky pedestrians and traffic jams about. And then the way Batman used to speed out of the Batcave, it was only a matter of time until he ran somebody over – after all, the cave’s entrance was so cleverly hidden that nobody would really feel like there was a need to watch out for cars around there.

And as far as the 1966 standard of navigation technology is concerned, well, there already was a satellite navigation system back then, which the navy had developed for it’s ICBM submarines. With the help of that system, the batmobile *could* have followed the streets quite precisely. Give or take 8 nautical miles.

The other stretch were the car’s atomic batteries, of course. Given how it was visibly powered by a turbine, I wasn’t quite sure how they came into play, anyway, but I felt certain it was ludicrously irresponsible to use nuclear power for a car…one day, Robin would have forgotten to lock the handbrake, and they’d had named the crater after him…12,000 years later, when they finally could have approached it safely. Admittedly, during the sixties, even some experts still expected nuclear batteries to become an everyday powersource for planes, trains, cars and even pacemakers. The batmobile for the TV serial was a customization based on a Lincoln Futura concept car…just imagine you could travel back in time and speak to the guy who did that: “No, cars won’t have atomic batteries in 40 years – in fact, they’ll still have fuel tanks. And in some Ford cars, they’ll still be placed behind the rear axle, even…” I doubt he’d believe you…