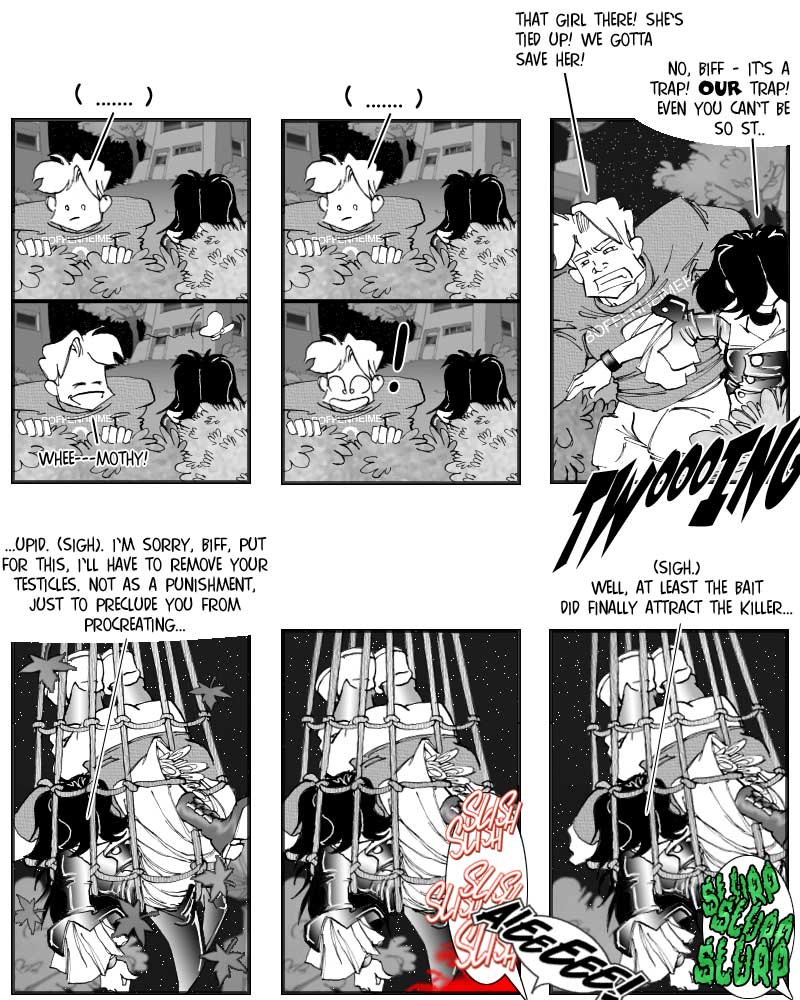 This is another proof for my theory that heroism really is just a variant of ADD. Yeah, I know you actually shouldn’t fabricate your own evidence, but it seems most people do it that way.

Oh, and speaking of hypocrisy, while Mopey’s goal of preventing Biff from handing his unique set of traits down to the next generation seems laudable, she should actually know that that not really calls for the complete removal of his testicles. A little ‘snip’ would be enough…so, perhaps, her claim of having no vengeful motives in this is not totally truthful. I’m not going to show the actual surgery, you can just assume that it happened sometime between this strip and the next. Starting next strip, please imagine Biff’s voice to be higher by half an octave.

And yes, Mopey *does* see the killer now, and the audience doesn’t. Come on, it’s not like that wouldn’t happen in all B-movies. And in this case, it fits tidily in with a time-honoured comic tradition, called a cliffhanger. Don’t worry, I won’t painfully drag this one out as I did with the evisceration one in the ‘Mummy’ chapter.

In response to reactions to the last strip, I’d like to clarify that the little girl in the last strip did not get run over. She managed to jump aside in the last moment (off-panel), and only her teddy, which she didn’t really like anyway, suffered repairable damage. And, jumping aside, she landed in the arms of the boy she would later marry, and have a bunch of cute kids with, and later she became pope. Satisfied, now? ;P

In the spirit of ‘not dragging out the cliffhanger unnecessarily’, Mopey will reveal what she has seen on Monday. A new voting incentive already went up earlier today, this one a sneak peek at plans by various TV channels to ‘fuse’ successful animation shows into combined formats.