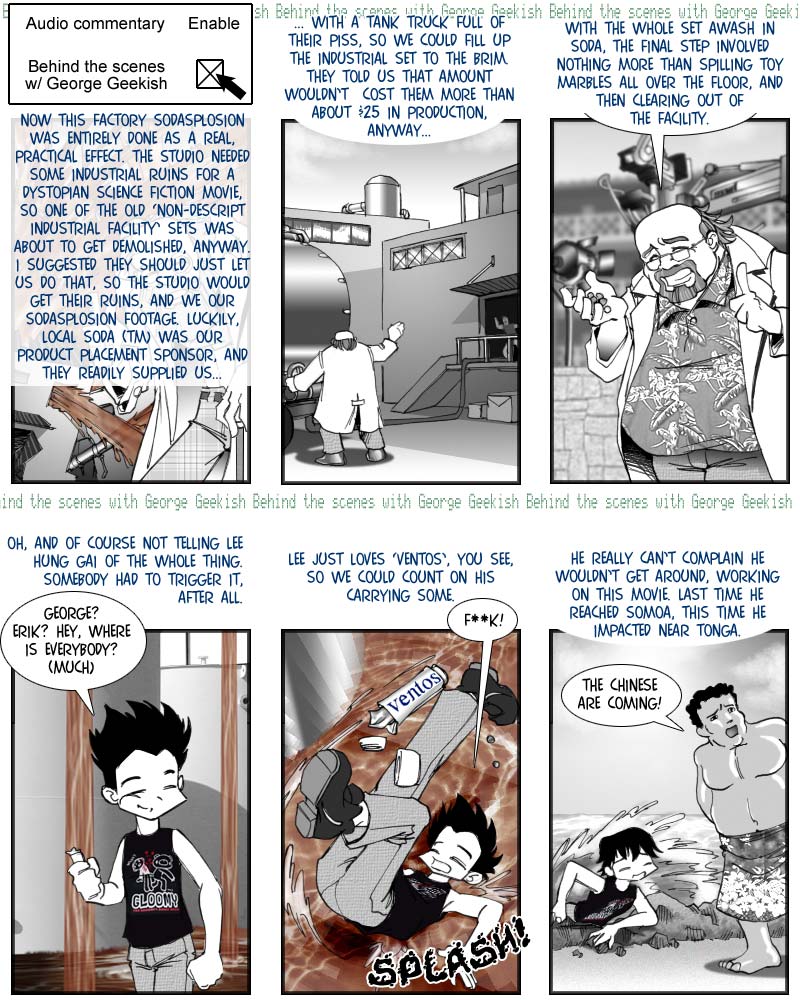 “Another highly efficient way to get spectacular footage at little to no cost lies in the careful misinterpretation of safety rules and regulations, a.k.a. staged accidents. The big advantage is, you can blow as much money as you want on it, and later just re-claim it from production insurance. Careful, though! This only works if you’ve got:

A., a producer who can actually get an insurance

B., a stuntperson who heals quick and has signed one of those ‘no sue’ waivers.

B has become rather rare, too – I think there’s only one guy like that left in the biz: Lee Douglas (formerly Lee Hung Gai). I’ve worked with him on a couple of movies, great guy, really. He has the right attitude, what’s it called….ah, yeah: resignation. That’s it.”

Lee, on his part, is a strong adherent of the concept of a “Pacific Century” – he’d just wish he’d get to spend less of the century actually being *in* the Pacific. He’s lucky, though, that he somehow always manages to end up near inhabited islansd – that’s not really that likely, statistically speaking. (As for his changing his name, more on that in a later episode.) Oh, and he is wearing another authentic ‘Engrish’ t-shirt here.

“Day got of to a pretty relaxing start, given that I wasn’t scheduled for any shooting until noon. Took my time over breakfast, and when I got to the set, nothing much was going on yet. I’m just glad I didn’t eat another bowl of cereal, for I had to swim nearly 15 minutes to reach the Tongan coast. Yeah, it had turned out to be on of those days, after all…”

In case you’re wondering how Local Soda(tm) can produce their beverages *that* cheaply, the answer is simple: they are really good in making use of synergies. The company’s main facility’s full name is: “Local Soda(tm) Beverage Factory and Waste Water Treatment Plant”.

More on Thursday. Today’s voting incentive is based on a news headline that was a real challenge to make any more “WTF?” than it already started out at.