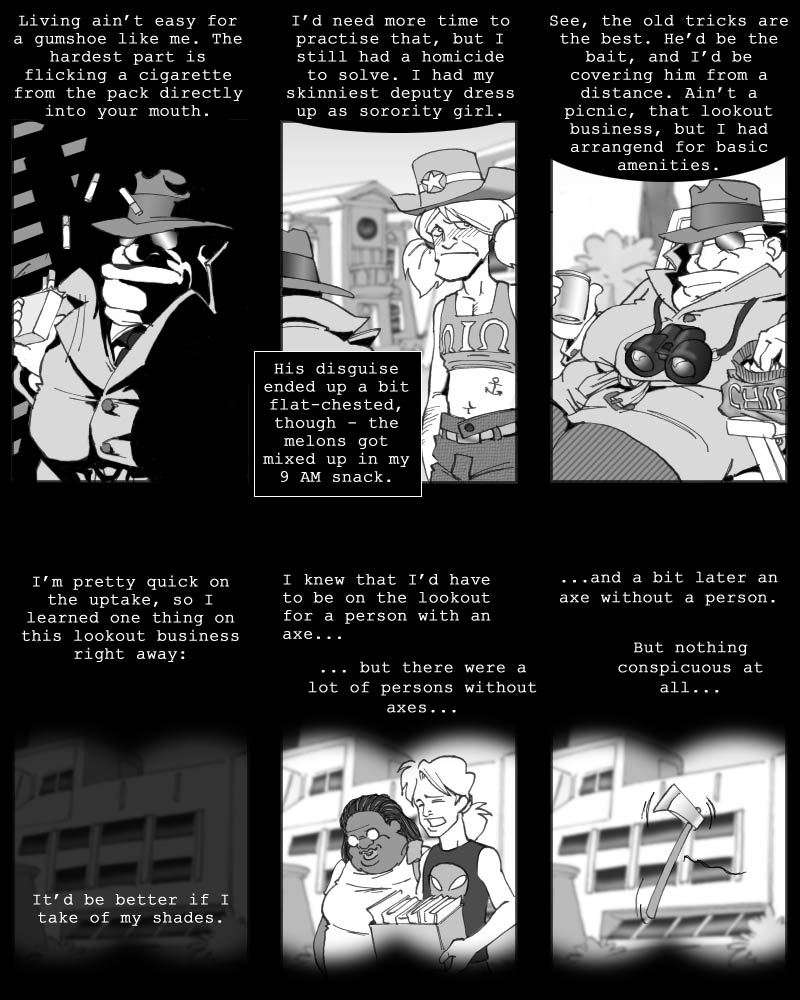 You really can’t blame our favourite civil disservant, Sheriff Ketchum, here. He had asked his profiler, who had clearly stated that the murders were committed by ‘some guy with an axe’. So, naturally, the Sheriff sees no reason to arrest some harmless axe just taking a walk in the park on its own. And, sincerely, how should he know axes don’t usually do that? After all, Marlin Perkins had never shown anything about axes and their natural behaviour.

The Deputy in panel two isn’t too happy about it all…he joined the force mostly because the respect the uniform commands. Too bad for him that Sheriff Ketchum doesn’t know the meaning of ‘No’. Actually, just one of many words he doesn’t know the meaning of. The Deputy’s disguise was supposed to be a lot more voluminous around the chest, but the melons fell victim to the Sheriff’s first snack after breakfast.

And the Sheriff’s absolutely right in panel one – that trick looks so cool when it works, but when it doesn’t, it just leaves you standing around open-mouthed and with a cigarette in your hair. Or your eye. Or the eye of the 6’8” guy behind you. Smoking is bad for your health.

For all the Maria and Michelle fans out there (you know who you are), I’d like to recommend to your attention their newly revealed great fanciness, to which yours truly contributed a bit of colour.

Supplied with amenities as he is, I guess we can rely on Sheriff Ketchum to be still on the lookout on Monday. Please vote.