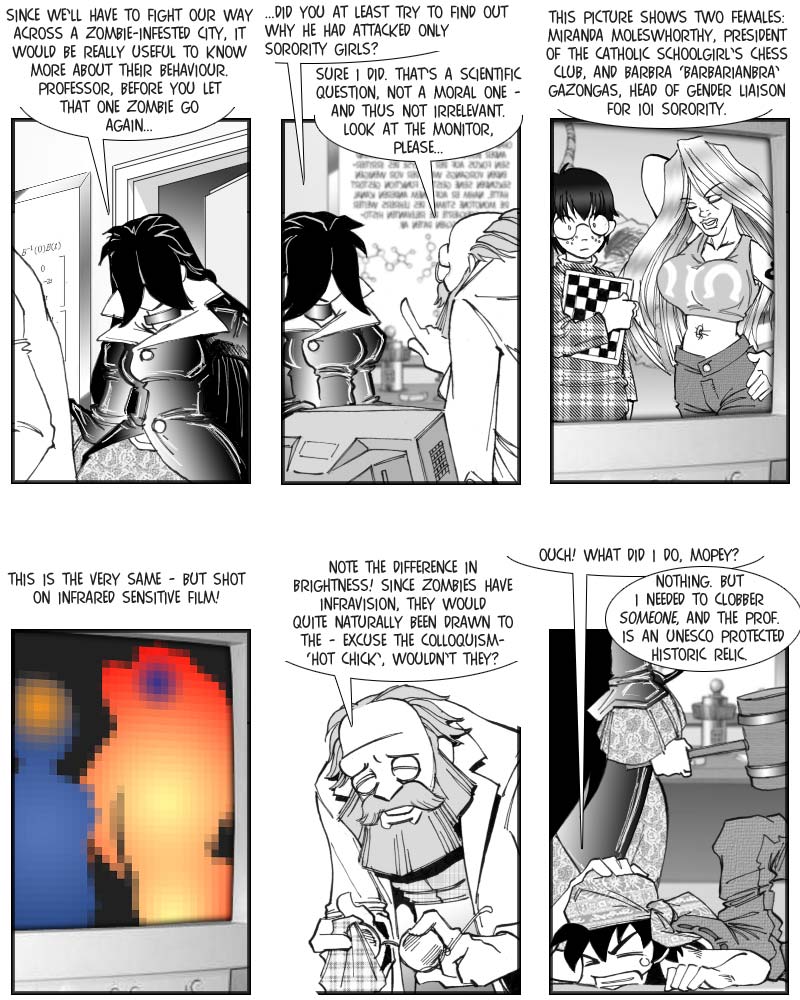 B-movie science rule # 498: two concepts that are completely separate and foreign to each other can be conveniently assumed to be identical, if they share the same name. Example: hot (sexually attractive) vs. hot (temperature). This is usually referred to as the “come on, the audience isn’t that clever” rule.

Panel two shows the Professor to be a true scientist, again – he might not exactly care when zombies maim and partly devour innocent civilians, but he sure cares about knowing why, precisely.

On another note, I’d like to dispel the myth that all women in B-movies always conform to the same outdated, sexist and demeaning stereotype. In fact, there are several different outdated, sexist and demeaning female stereotypes in B-movies, and female characters can conform, at any given and the same time, to between one to three of those. In movies, a character’s waffling/switching between different stereotypes is usually explained by traumatic experiences or hormonal imbalance, in comics, sneezing is also an option.

And no, the apostrophe in “Catholic Schoolgirl’s Chess Club” is not misplaced. The club only has one member. And yes, Molesworthy’s chessboard is missing one row and two columns…uh, that’s not a mistake, either…it’s…uh, it’s…a Catholic chessboard. Right. They leave off some squares out of humility. I’m not 100% sure what Ganzongas’ function actually entails, or why breast measurements figured into the election process, but she is considered one of the most important officers of the sorority.

In panel six, clobbering Snuka might appear unwarranted, but Mopey has learned not to shut her aggressions in for extended periods of time. In the end, it is better that way for everyone involved. And while Snuka has not actually done anything wrong, right at that moment, if the Professor had shown him the picture, he would inevitably have made a remark that would have earned him a worse clobbering, so it counts as preemptive.

And to carry on the ‘science’ theme, a bit of science news supplies the backdrop for today’s voting incentive. More on Monday.