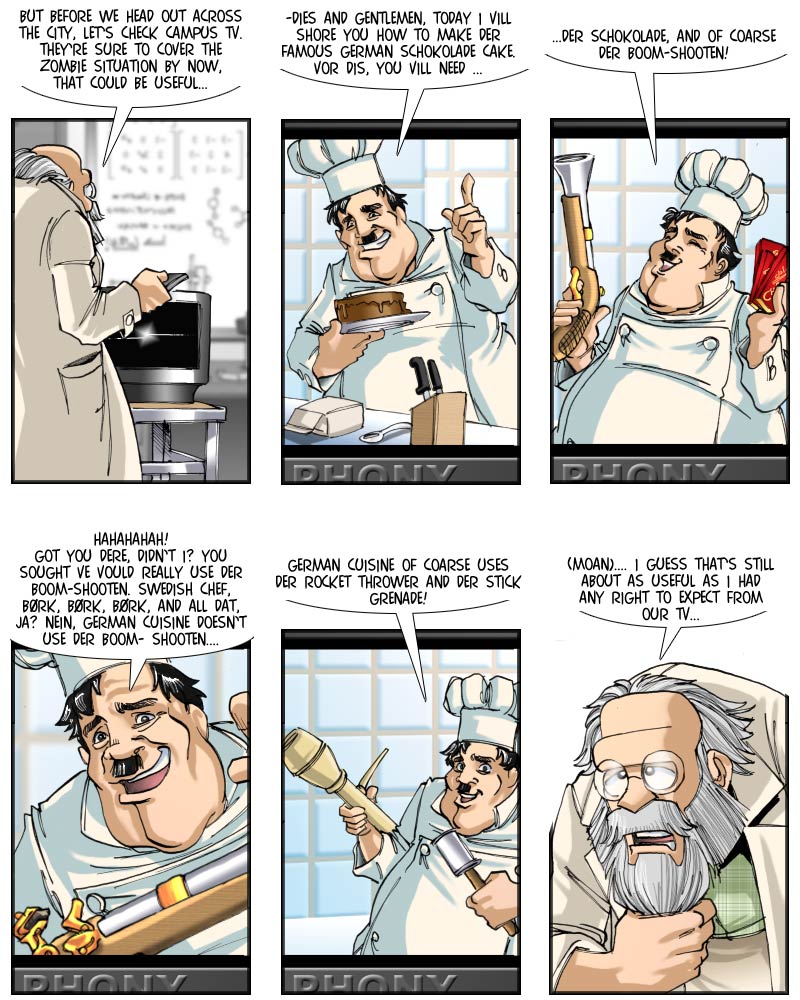 Just recently it occurred to me that it would be a real shame to have a character like Mr. Neibiesler, and not use him for at least one ‘Swedish Chef’ joke. With the big fight just around the corner, I felt this was the last possible moment to get that bit in, hence the Professor’s sudden attraction to the TV set.

Given his similarly unintelligible mode of speech, I felt the major difference between Neibiesler and the Swedish Chef would be the kind of weapons involved…no outdated muzzle-loader for a German chef – why shoot at the ceiling when you just as easily could shoot through the ceiling? I guess this also means we’ll not have to worry about Mr. Neibieslers safety during the undead onslaught – with his plentiful armaments, he should be able to hold off the zombies from his kitchen easily.

In order not to perpetuate urban legends, however, I’d like to point out that German chocolate cake is not based on a German recipe. The name derives from ‘German Sweet Chocolate’, which in turn also has nothing to do with Germany – it was just created, in 1852, by an American by the name of Sam German. German tastes in cake tend wore towards multi-layered affairs containing cream, jam and brandy – try a piece of Black Forest gateau to get the general idea.

Naturally, Mr. Neibiesler’s show is one of the mainstays of Lillytown Campus TV. They aren’t allowed to broadcast anything about sex, every student already knows how to sleep from high school – so the only issue of interest left over is food. The Professor’s (low) opinion of that show, and LTCTV in general, might be tinged with a tiny bit of jealousy, however. At one time, he tried to establish his own format there – a science show pulling no punches, depicting scientific issues comprehensively, without pandering to the viewers by overly simplifying things. Parts of the premiere audience are still comatose.

On a sadder note, ‘Monster Mash’ creator Bobby ‘Boris’ Pickett passed away Thursday, April 26th, at age 69. In his memory, here’s what he was fond of calling “…a medley of my hit.”

Another newsitem for today’s voting incentive, I even managed to tie it in with the last one. =P More on Thursday.