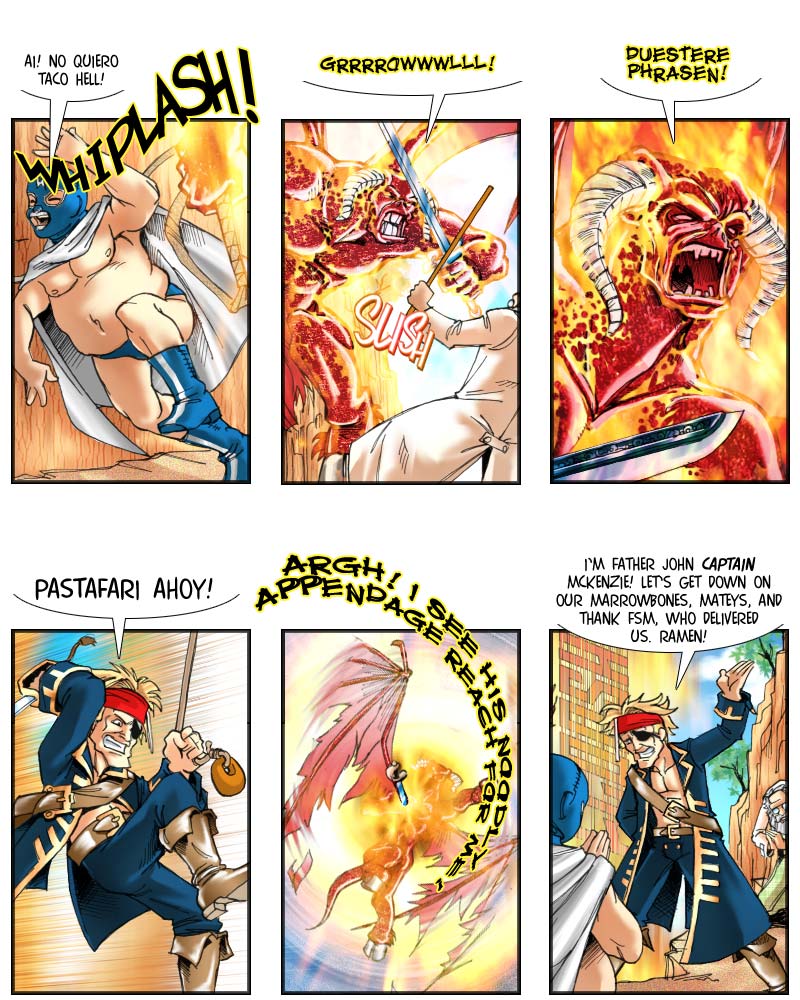 And thus is revealed who was behind that one mysterious, vaguely piratey, silhouette in those recent strips – none other than our very own Father McKenzie! As you might recall, Father McKenzie had suffered under a lack of faith – potentially career-ending for a cleric – until very recently, when the Flying Spaghetti Monster touched him with his noodly appendage, miraculously restoring his faith. Naturally, Father McKenzie has since chosen to live the life of a pirate, since pirates are recognized as absolute divine beings in Pastafarianism. Also, their mere existence reduces global warming, as has been scientifically proven.

And, since defeating a Balrog, a being of supreme evil, would naturally require an opponent similarly spiritually aligned with the side of light and right, Father McKenzie made for the perfect Deist-ex-Machina for this situation. Plus, he has now brought the Professor’s entourage back up to sufficient numbers for the final leg of the journey.

Naturally, the proper way of introducing a pirate character is having him swing into the scene by a rope line with attached tackle. This might be justified by some ship being nearby, or some construction equipment…or just by the natural awesomeness of pirates, enabling them swing on a line attached to nothing but cool. Note, however, that that applies only to pirates of ‘stage 2’ and above – if McKenzie wouldn’t wear an eyepatch, his coolness might not have been enough for that trick. (Remember, pirates are so awesome that their spatial perception ability actually improves with the loss of an eye – just like their sense of balance improves by losing a leg.)

Between a Mexican luchador and a cleric-turned-pirate-for-religious-reasons for companions, the Professor should now be able to face any further obstacles and mysterious silhouettes that still stand between him and his ultimate goal. But what will those obstacles and mysterious silhouettes turn out to be? Stay tuned for our next thrilling episode on Monday. New voting incentive is also up.