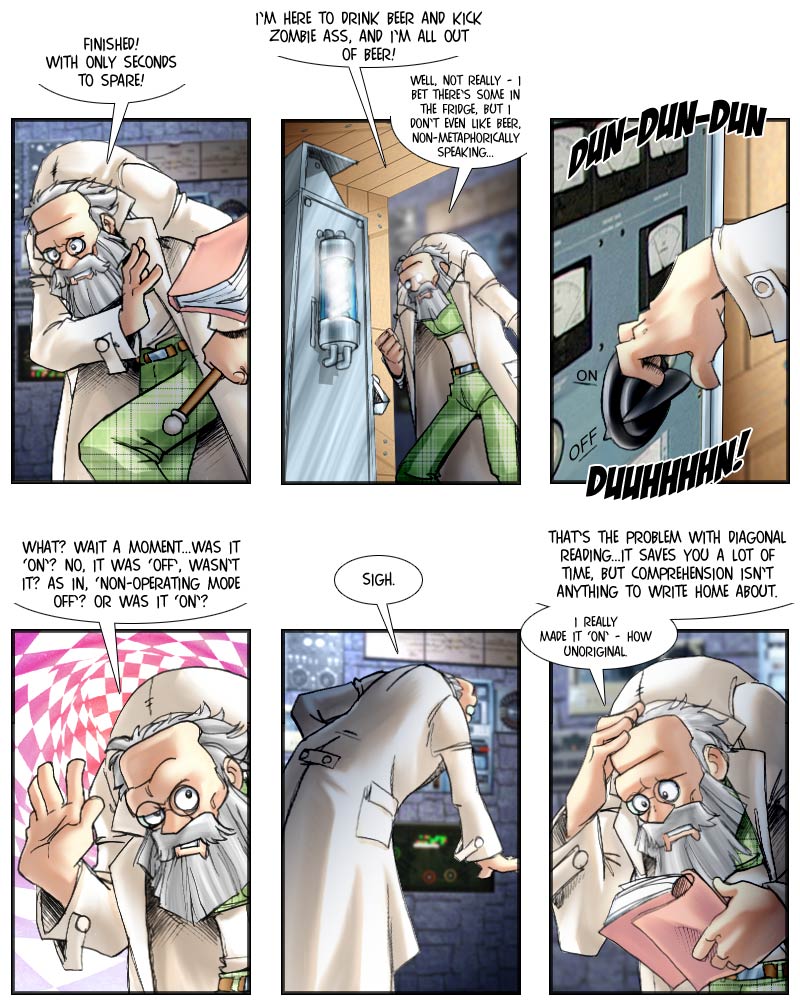 That is indeed the problem with diagonal reading – you can consume huge amounts of texts at a rapid pace, but you don’t actually pick up much of the content. =P Still a very useful technique, for all of the cases where you have to read text whose content you know in advance, or don’t actually even want to know at depth – and there are depressingly many of those.

Many people would think the Professor is being overly cautious here – after all, isn’t it obvious that turning the ‘ON’ switch would turn the device on? But the Professor knows his own way of thinking, and realizes how it is all a matter of perspective: turning the device on simultaneously means turning the device’s not-being-on-nes off, so he could have labeled the switch either way, depending on which hemisphere of his brains he was thinking with at that point in time. Better to make sure (and good thing he’s properly documenting things like that!).

In panel two the Professor is using a figure of speech, something he only tends to do under special circumstances – usually he shuns them for their near-inevitable lack of precision. If the circumstances had not called for a short and forceful statement, he’d felt much more comfortable being a bit more precise: “I’m here to drink beer and kick zombie ass, and I’m all out of beer….save for the six-pack my assistant usually keeps in the fridge, which I wouldn’t drink, however, because I normally don’t drink beer, and I’m actually not really here to drink beer and kick zombie ass, but just to kick zombie ass regardless of the availability of beer. And by ‘kicking zombie ass’ I don’t actually refer to inflicting physical violence on individual zombies’ posteriors, but just to turning on my anti-zombification device in order to stop the ongoing zombie invasion, which would in effect resemble the situation if I had gone out and indeed inflicted physical violence on all of the zombies’ posteriors on an individual basis, which time and my physical frailty, obviously, wouldn’t really have allowed for.” I think that’s why Samuel L. Jackson doesn’t get cast as a scientist very often – it would be really hard to deliver those lines with similar force as the shorter version.

Don’t worry the Professor might run out of time, though – he might only have seconds to spare, but the last few seconds before such a climactic moment often take minutes in a B-movie. It’s relativity, you see…or perhaps the rapid intercutting. But the Professor knows he doesn’t really have to hurry until his scene start getting intercut with a digital timer ticking down rapidly.