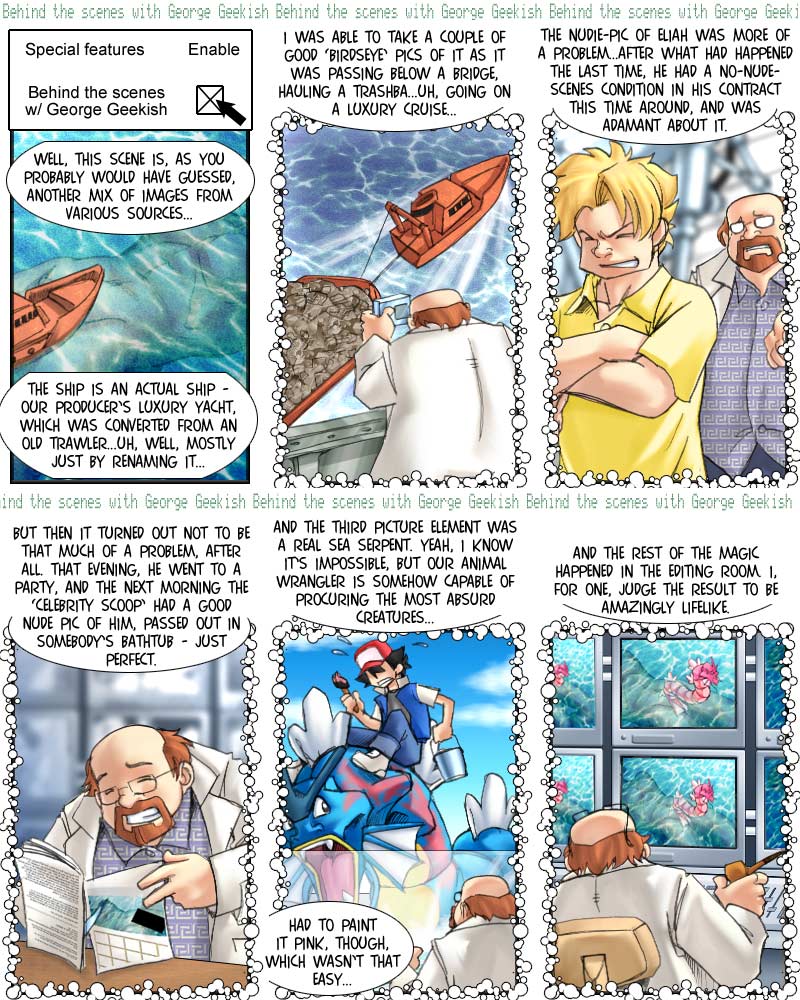 Yes, this stunning sequence was indeed created entirely without any model photography…everything real and full scale, just edited together at different scales. Of course George could have created pretty much the same effect just with Eliah, a bathtub and two toys – but, for one thing, Eliah wouldn’t have gone along with that…and…and for the other thing, that’s why George is a special effects artist, and not a special effects craftsman.*

The ship in the scene is indeed producer Nolan Nobucks’ private luxury yacht – it might have begun its existence as a humble trawler, and then it might have been left to rust pretty badly for an extended period of time…but the little ship’s fortunes changed dramatically when Nolan bought it for a complete and drastic conversion into the ultimate luxury yacht. After long and careful planning, an expert craftsman painstakingly hand-painted the ship’s new name onto a placque at its bow: “Nolan’s Luxury Yacht”. Yes, that was the only modification they did, but it was very classily done.

When he isn’t renting the ship out to haul barges of trash out to sea, Nolan often invites potential investors for his movies to fishing trips on the “Nolan’s Luxury Yacht”…in fact, that might be part of the reason why he has such a hard time getting funds. If you invite rich people to a fishing trip, most of them tend to expect the kind of fishing that is recreational, not the kind that is one of the toughest professions on the planet. >_>

Perhaps a few words on the issue George mentions in panel three: ‘What had happened last time’ was that Nolan had made use of the fact that ‘The Revenge of Rutentuten’ wrapped early and used the three left-over days to shoot scenes for another little movie. Eliah and the others had to go along, according to the contracts they had back then…and those contracts also had no clause prohibiting nude shots, unfortunately. George often calls that other movie a ‘kung-fu flick’, but that’s somewhat charitable – there was…uh…a secondary focus, as well. Suffice to say that Eliah ran into a little trouble with his church because of his participation in that production. He’s a mormon, or something…or rather, he was a mormon or something…I don’t know what’s supposed to be so great about Salt Lake City, but Eliah was rather hurt by his lifetime banishment from the city. (Lee also suffered some unfortunate consequences from all of that, but that’s a story for another day.)

The “Celebrity Scoop” is the only magazine Nolan Nobucks Production’s has a subscription on: nothing is more valuable to a B-movie producer than the name of a freshly discredited star. (A non-discredited star will not work for a B-movie, but after two or three B-movies they won’t be a star anymore – so there’s only a very small window of opportunity to make the most money off a falling star.)

Being animal handler/wrangler for a B-movie production is a tough job, but Nolan found somebody who’s been practically born for it. And the kid was happy to get the job, as well – apparently, he’s wasted his whole youth wandering about aimlessly, so he doesn’t have a lot of marketable skills. He’s got one, though – he can catch and handle the most absurd creatures you can imagine. George has long since grown accustomed to the fact that he just has to supply some vague description to him, and somehow the kid’ll drag something like that onto the set – no matter whether it’s ever been seen in a zoology book, or just in somebody’s weirdest nightmares. It’s almost diquieting, but George was never been in the habit of looking a gift horse in the mouth – just to think how difficult it would have been to pull that sea serpent thing off by any other means…

*The other reason why he isn’t a craftsman is his clumsiness, of course.