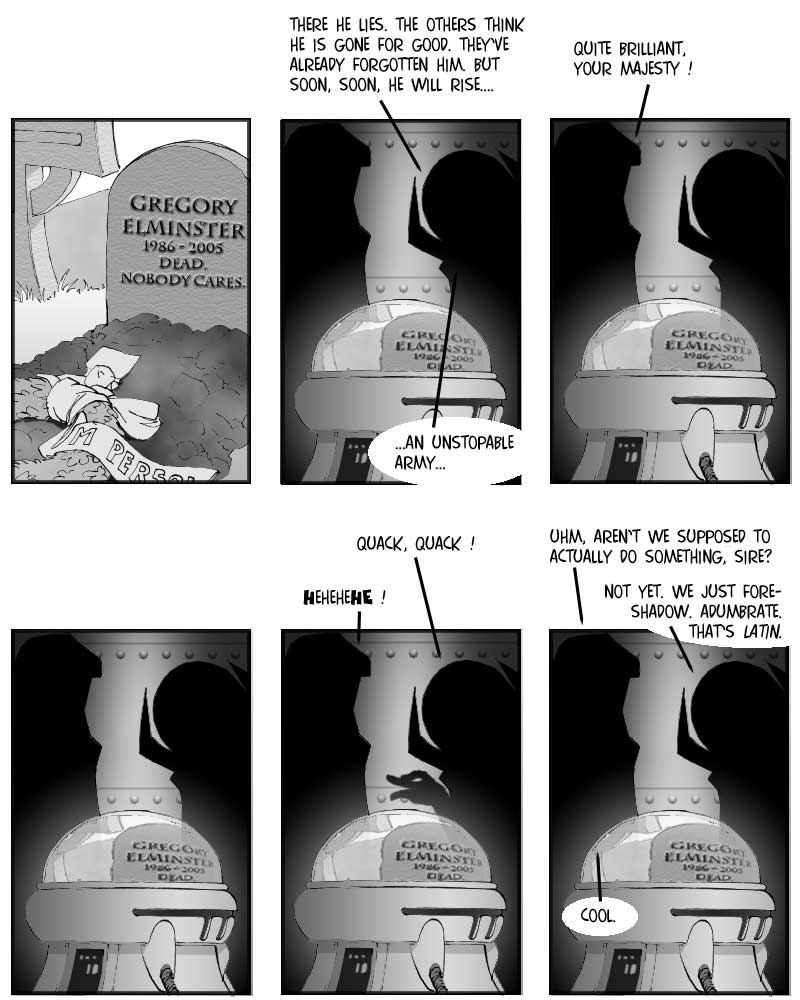 Another dispatch from the world outside of the Internet to the world inside: STAY IN THERE! It’s awfully boring out here, and the natives are growing restless. I guess we’ll need a gatling or two at the fort’s gate.

Foreshadowing can be done quite subtly and elegant, of course, but the b-movie way is doing it in a much more literal sense: If there’s a character whose identity is not yet to be disclosed, and who still needs to be shown doing something, you just show his dark silhouette or shadow on the wall.

That approach is not only rather heavy-handed (aww, but we still love it, don’t we?), it also usually doesn’t work in b-movies. That is, the audience recognized the obscured person’s identity right away, because either:

2. The shadow speaks with the same thick German accent as the friendly and solicitous, yet vaguely disquieting German scientist the protagonists met two scenes earlier.

3. The silhouette shadowed against the girl’s bedroom walls is hunchbacked, has one leg that is too short, and one hand replaced with a primitive hook. Coincidentally, the creepy professor’s lab assistant displays exactly the same deformities.

4. The name of one of the actors is on the ‘Big List of Perennial Villains’, in which he has an automatic monopoly on all shadowy threats in the movie. This list encompasses Boris Karloff, Bela Lugosi, Christopher Lee, George Zucco and many, many others.

As regards Gregory’s epitaph, I admit it turned out a bit prosaic, but I’m just no good at these things. And I like concise epitaphs, anyway, like the one on Jewni Asew’s tombstone. Asew was the most successful and notorious double (or rather, triple) agents of the early 20th century, and his tombstone is inscribed only with his name – in code!

The thing in the foreground of panels 2-5 is a ‘futuristic’ vision device, as used to be common in science fiction films. Obviously, prop designers in the 50ies expected viewscreens to actually DEvolve over the years, up to a point where they would be clumsy devices which needed to be put smack in the middle of the room, offered only a very distorted image and needed to be viewed standing, awkwardly bent over them. Boy, wouldn’t they be surprised to see modern flatscreens…

Installation date for my Internet connection has been pushed back to Feb. 6th, and I have my doubts even about that…hoping for the best, though.

Perhaps that mysterious shadow’s enigmatic ramblings gave you an idea where all of this is heading, but don’t jump to hasty conclusions. 🙂 More on Thursday. (And please vote for me, in the meantime)