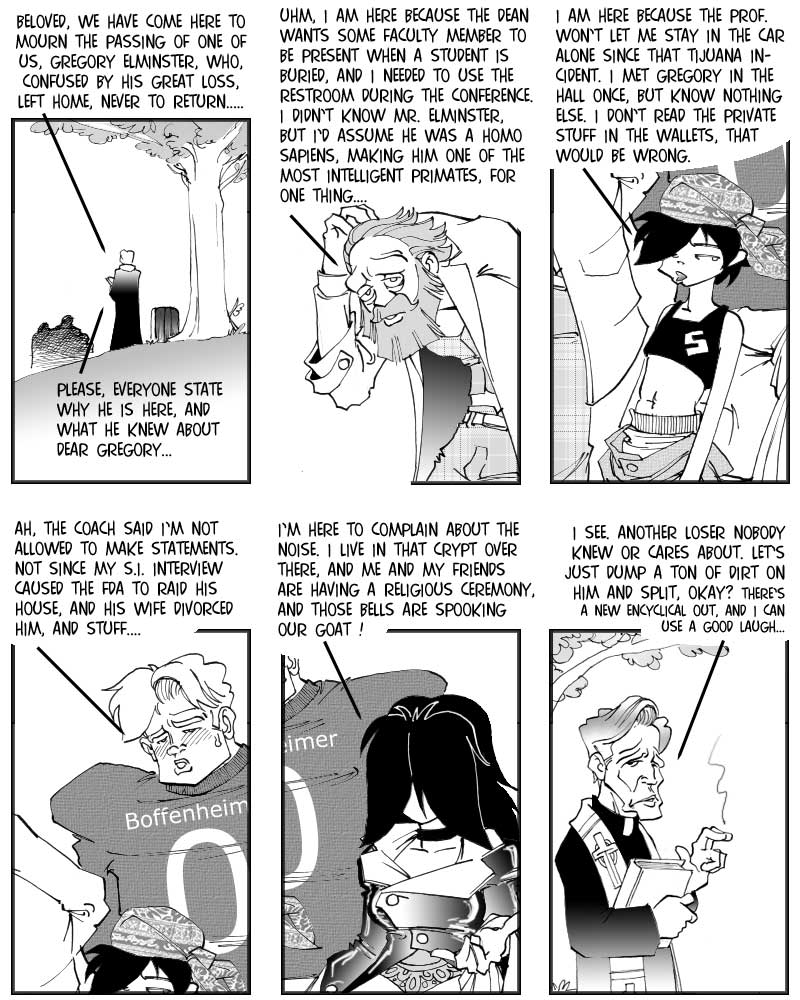 So here they are again. There isn’t that much different about our heroes, but I’ll still give you a short overview over what they were up to in the meantime.

Professor Doctor has resumed his duties as a researcher and teacher at Lillytown university, while adding ‘surrogate parent to juvenile delinquent’ to his list of pastimes. Having no prior experience in parenting, the Professor approached the issue scientifically, and, finding out that ‘growing up’ is a process that takes place practically automatically, hasn’t bothered Snuka much – save for regular hormone testing. By the way, this is the first time I drew him with his lab coat open – vest and trousers were a present from Sir Lostalot, as can be seen by the tartan.

Snuka, for his part, has adapted quickly to his new surroundings. One of the first things he learned was that his baseball shirt and cap were, like, totally eighties and stuff, and he immediately went about revising his wardrobe. The sad result was nearly inevitable, after all, to whom should he have turned for fashion advice – the Professor? Biff? Mopey? As far as education is concerned, Snuka was enrolled in High School for a while. His peers there, however, were not quite up to dealing with somebody of Snuka’s experience and, uhm, worldliness, and owed him most of their money, clothes, kidneys and souls within a month. Before Snuka could collect, the Professor took him off the school and enrolled him at the University, to protect the innocents.

Biff stayed true to himself, as well. The only major development was that he somehow managed to overlook a goalpost, and has a new face now. The plastic surgeon had little to go by save an old childhood photograph, so the Biffmeister doesn’t look quite himself for the time being – but it’s only a matter of time until Biff squishes that face, too, so there’s always hope. After the fateful S.I. interview, a vengeful coach changed Biff’s number to ‘0’ – unfortunately, that joke was totally lost on Biff.

As far as Mopey is concerned, there’s no change at all to report – she’s still the Professor’s assistant, to cover her professional life, and she’s still goth, to cover everything else. At least you know where she lives, now – and why I wrote on Halloween that no Trick-or-Treaters would dare to go near there.

Perhaps a few words on Father John, as well, even if we are unlikely to see him again: He hasn’t always disposed of his duties that unmotivatedly, but his faith has been a bit erratic off lately – cut him some slack. Or pray for him, if you will.

And a single word on Gregory: dead.

And a few words on me: not dead, but still without Internet access. Which some people would consider only marginally better. Well, no surfing means I get more time to hide under the bed and cry – but I also made a new voting incentive, as well. Inevitably, it’s Episode III themed again, since all of my other DVDs aren’t yet unpacked.

If you still have no idea what all this dying and getting buried is supposed to be about, make sure you don’t miss Monday’s update – when the ‘Mystery of Gregory Elminster’ will yet deepen!

Text: At a funeral, we mourn the passing of one we loved. Or at least cared about. Or not.