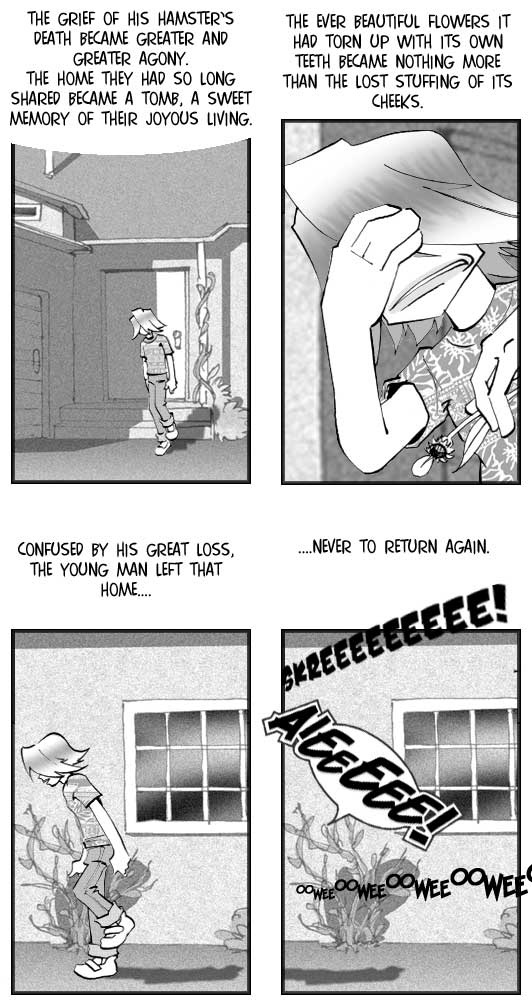 And thus begins the second chapter of the B-Movie Comic, entitled ‘Attack of the >description withheld in order not to spoil the surprise<'. If everything goes as planned, you should be seeing this strip framed by a newly laid-out website in celebration of the new story-arc. I have to take the webmaster's word for it, since I'm still without web access myself (whine whine whimper WHINE). If the new design is there, I'm sure it's spectacular again.

In naming this second chapter, I’ve broken with the hallowed b-movie tradition of giving everything away in the title. I mean, normally it went like this:

Writer: ‘ For the new monster movie, I want to come up with something mysterious and unexpected…something that will keep everyone guessing…kind of a detective story thing. I want to have, like, a giant radioactive junebug! ‘ Director: ‘ Yeah, I see it! We will have this atmosphere of allusions and uncertainty…small hints, blurry shadows…and the audience won’t get to fully see the monster until the last 15 minutes, to keep the suspense up. ‘ Producer: ‘ Great! I’ll call it ‘Attack of the giant radioactive junebug’, and have the critter dead center on all the posters!’

I just couldn’t bring myself to follow that example…so the title will stay a bit unwieldy for the time being.

If you are into b-movies, you probably recognize that the above strip is a tribute to the beginning of Ed Wood Jr.’s perennial classic, ‘Plan 9 from Outer Space’. Bela Lugosi’s character, creatively named ‘the old man’, had to die in the movie, but Bela died for real before getting the chance to act that scene. So Ed had to make the best of the little footage he had, and just took a scene showing Bela strolling through his garden and off camera. He froze the frame (Bela’s shadow staying visible at the corner), overlaid it with a scream and siren sounds, and had the narrator explain that there had been an accident… what a way to go. The problem was that the plot absolutely required that guy to kick the bucket right away, and I just couldn’t find any way to wrap that in teh funny. So I thought a remake of that classic ‘exit stage right’ (although it was left) might be the best thing left to do with it. It’s getting funnier from here on, promise.

On Thursday, our (slightly retouched) main cast will make their (re-)appearance, so don’t miss that episode – especially since you will also learn who that guy that died today actually was. Voting is still very appreciated, I might add completely unselfishly.

Text: You can’t have a happy end without a tragic beginning, so the new chapter of BMC already starts out with bodycount = 1.