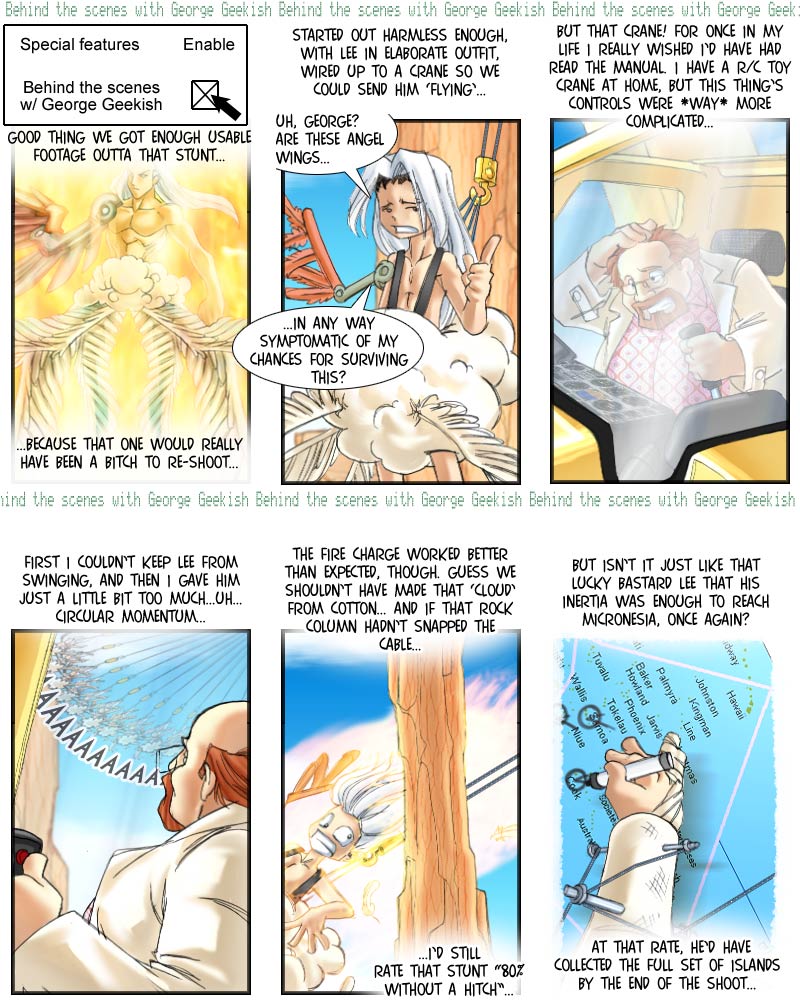 As a little epilogue to the “Bishounenly Enemy #1” affair, here’s a little look behind the scenes on that stunt. As anyone would probably have expected, it ended with Lee flying towards the Western horizon, screaming and on fire, before getting to enjoy another extended stay on a beautiful Pacific Island…in a hospital on a beautiful Pacific Island, that is. The Pacific Islanders by now consider him one of their own, and refer to him as moe oe ekae eboek neea ijoenein atsin eat eboek neea ituegain moe uegan, which means “unfortunate Asian boy who comes flying from the Eastern horizon screaming and on fire”.

If any small consolation is there to be found, for Lee, it must be that George almost admitted a little bit of the hint of a shadoow of partial responsibility for the incident and its consequences. But this time I have to step up and defend George: he really had not reason to expect that the real life crane would be so much more complicated to handle than the R/C model of his – after all, the controls on his real life car are almost identical to those on his R/C car, so why would it be different for the crane? (And, yeah, he’s always been driving his real life car just like the R/C model, and never had any problems. Well, almost never – he hardly ever gets into accidents. In fact, whole days pass without him getting into a car accident, and once even close to a whole week.)

This, by the way, was the last really dangerous stunt for Lee in this chapter, so he’ll have to postpone his lifelong dream of reaching Hawaii for the moment. You get another chance to see him in the hospital in today’s voting incentive, though. More on Monday.