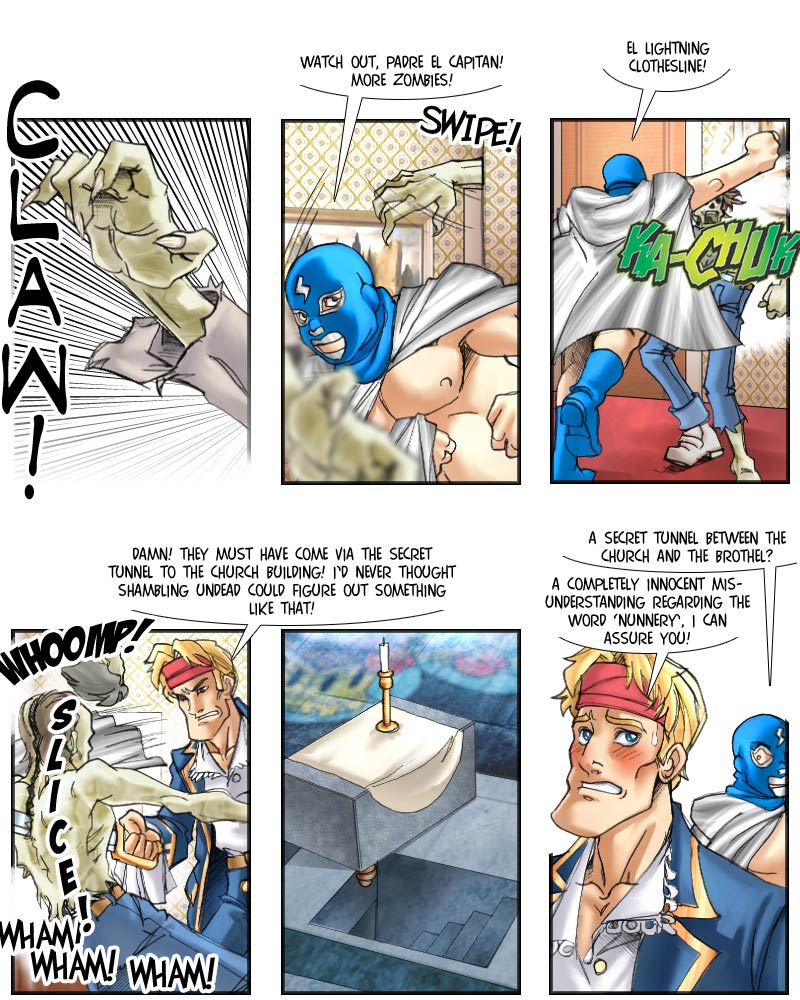 I thought (and know I’m not the only one thinking) it’s been too much time since we last saw some zombies in this zombie flick. Then a reader pointed out to me that it’s somewhat illogical that Father John, a regular customer of Dame Sue’s, would not know about that elevator the Professor just forgot all about. To cover my behind, I invented the secret tunnel from the church building – thanks to which the Captain had never approached Dame Sue’s from the side with the elevator. Combining those two ideas allowed me to dish up a little bit of extra zombie action close to the finish line.

It’s not much of a stretch to assume the zombies would locate the secret tunnel, in my opinion – the entrance is hidden under the altar, because that’s where it always is. Seriously, whenever some church in B-fiction features any kind of hidden tunnel or passageway, the entrace is nearly always hidden under the altar. And churches in B-fiction feature such tunnels quite regularly and, I would assume, much more regularly than churches in real life. If the church in question is located in Great Britain, the pretext for the existence of the tunnel will nearly always be the religious strife of the 17th Century – exception: in Edgar Wallace stories, the pretext for the existence of the tunnel might also be that the vicar is really an ex-convict running a human smuggling operation from the church basement. I think fictional altars are such a hotspot for hidden passages due to the symbolic value – by placing the portal to the dark side directly under the holy of holies, the symbolic effect of subverting (or perverting) the building’s regular function is most pronounced. Rather than ascend to the Heavens, the false priest – quite literally – descends into the Netherrealm from the very spot he is supposed to perform his most holy functions at. Practically, of course, a lot of reasons would argue against such a placement – mostly that you would normally not try to hide something in the most prominent and visible spot in a building. Ah, well…style beats function.

Secret passages naturally appear more plausible in the context of a historic church building than a newly built one, but that’s hardly ever a problem – churches in fiction generally tend to be historic ones, at least much more regularly than in real life. It’s the aesthetic value, I guess, the gothic atmosphere – which art director could pass up on the chance to have things like stone gargoyles, stained glass windows, candlelight and the grotesquely deformed shadows of crudely sculpted medieval statures in a movie? Plus, it’s a great way to get massive amounts of fornication into the flick without running afoul of the censors.

As far as panel six is concerned – yeah, Father John affects a pair of bishounenly eyes whenever he has to make excuses. He picked that trick up at the seminary, and it’s always worked like a charm for him – even in his new occupation as a salty sea-dog.