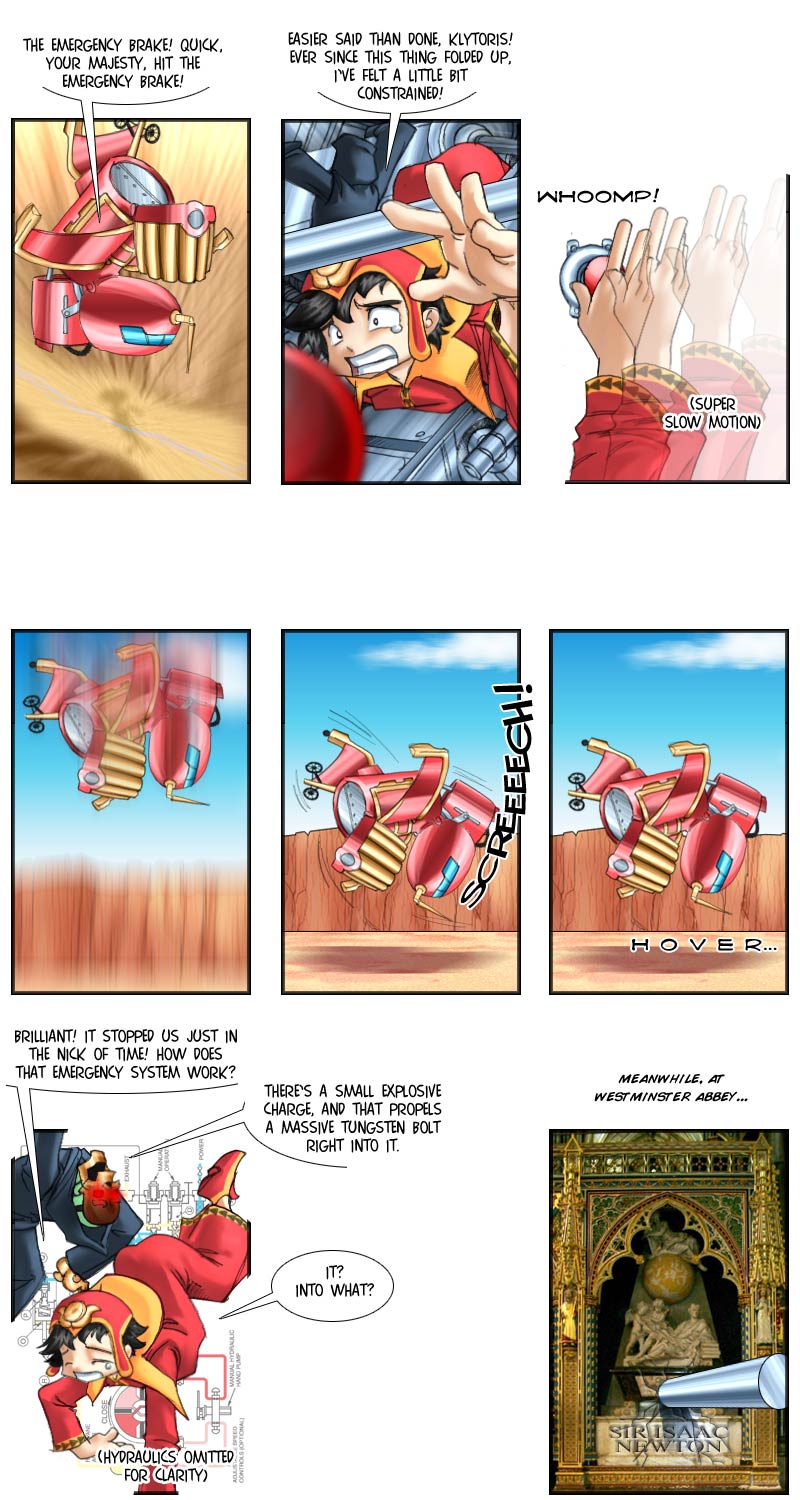 Panel two clearly demonstrates exactly why the crew normally has to disembark before the ship is folded up into storage position: the interior does get just a little bit less spacious than it tends to be in flight mode – all those hydraulics have to go somewhere, I guess.

Fortunately, Lee was just the right actor to shoot those interior scenes – he’s well accustomed with having to remain in inconvenient positions for long stretches of time: not only did the production give him only a cargo trailer to sleep in, they also kinda forgot that they still needed it for equipment storage at night. He had no problem holding the position depicted in panel seven for hours of shooting – because that’s exactly how he has to sleep every night, jammed in between arc-lights, cameras and other, similarly non-cushy pieces of equipment.

Akuns, on his part, was saved by a particular feature that nearly every B-movie contraption possesses: a manual override switch for the laws of physics. Most B-movie machines wouldn’t work at all without something like that, and a few wouldn’t even hold together, if ever subjected to the full weight of reality. Most of those switches work on a simple principle: they connect to a network of massive tungsten bolts suspended over the graves of eminent physicists. When the button is pushed, a computer determines which of the laws of physics is at issue, and then suspends that particular law (or laws) by triggering a mechanism that fires the tungsten bolt suspended over the grave of the author of said law. The presences of the tungsten bolt will temporarily block the flow of physics from the hallowed remains to the world at large, and a thus a segment of physics will be suspended for the duration. After the acute crisis has been dealt with, the bolt is removed and the damage to the monument is repaired (in order to prevent the tourists from noticing – but if a tourist just happens to stand directly in front of the tomb when the bolt is fired, they’ll likely still notice).

The monument in panel nine is the actual tomb of Sir Isaac Newton at Westminster Abbey – I just replaced the lengthy epitaph with his name for better readability. And the diagramm in the background of panel seven is of an actual emergency shutdown system. No, I don’t know why that involves a pokeball.

Speaking of physics, in B-movies there tends to be a very marked time dilation effect connected to the operation of devices – as panel three demonstrates, time will slow down when some button is about to be pressed, or some lever about to be pulled. The amount of slowing down is directly proportional to the importance of the button – simple lightswitches are operated in close to real-time, but emergency shutdown devices take a minute to move your hand that final inch. And the infamous (nuclear) red button requires the President to move towards it 15 minutes into the movie, if there is to be any chance it’s going to be pressed in time for the end credits.