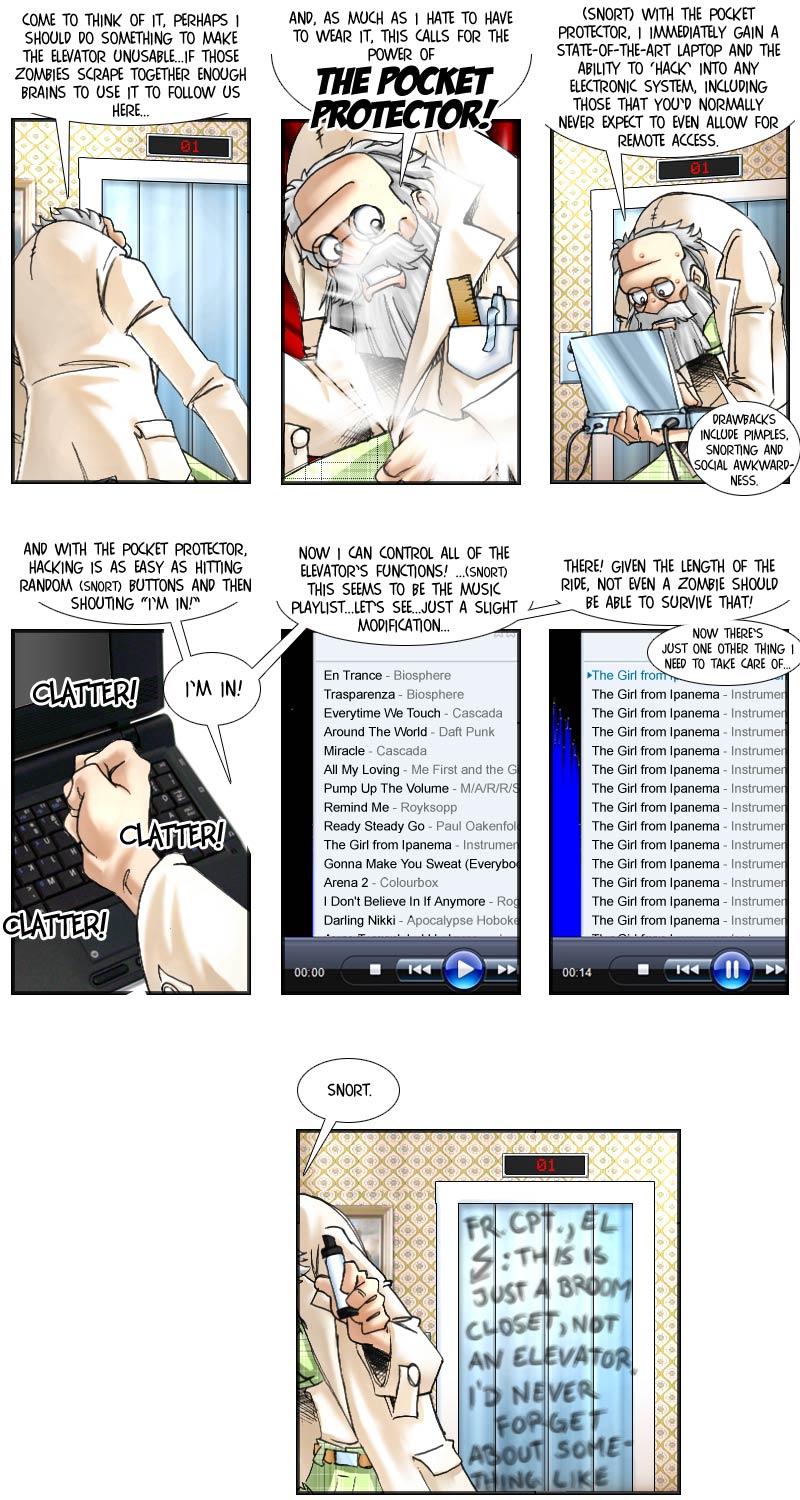 There’s an upside to having lived as long as the Professor has: while his memory might suffer the occasional lapse or two, his many years of intently studying the B-movie world around him have equipped him with deep insight in some of its idiosyncracies.

He knows, therefore, that wearing a pocket protector will automatically turn him into a nerdy hacker – and a nerdy hacker can hack into just about anything in a B-movie world. Yes, that includes many things that you would not normally expect to be controlled by remotely accessible systems – even many things you would not normally expect to be electronically controlled at all. In fact, if there was a B-movie about nerdy hackers time-travelling to the Neolithicum, they’d likely be able to hack into things like fire, stone axes and wooden clubs (while the jock accompanying them would only be able to hack into a wooden club with a stone axe) – but that would likely go unnoticed, given how the movie would likely be bad for about 2.3 myriad other reasons.

Such B-movie hacking is also completely unconcerned with any compability issues, and the systems hacked into are always readily and intuitively understandable at the intruder’s first glance (as compared to real life, where many such systems aren’t even really understanable to the people that created them). Also note that, as the Professor obviously knows, B-movie hacking does not depend on what you’re doing – just on how you’re doing it. Key points to remember are typing really fast*, starring at the screen very intently and raising a fist in triumph as you shout “I’m in!”.

Given how easy, yet powerful, this particular transformation is, you might ask yourself why we’ve never seen the Professor use it before – but the answer is simple: he could only use it safely now that he is alone. As panel three shows, he is aware of the drawbacks – pimples and snorts he could live with, but the social awkwardness would have been a real problem. A B-movie nerd is so socially inept that the Professor would not even have been able to communicate properly with El Lightning and Fr. Cpt. McKenzie while wearing the pocket protector – if he had worn it while Mopey, a female being, still was around, he would have suffered one humiliating accident after the next, likely losing several pairs of pants in the process. Had he worn it while both Mopey as well as Biff, a jock, were around, Biff would have given him a wedgie whenever he lost a pair of pants around a Mopey. All in all, it is not a tranformation a person of the Professor’s age would ever willingly attempt in the presence of others, due to the sheer indignity – but right now, all alone, it is quite useful.

*which in real life makes you a hack, not a hacker.