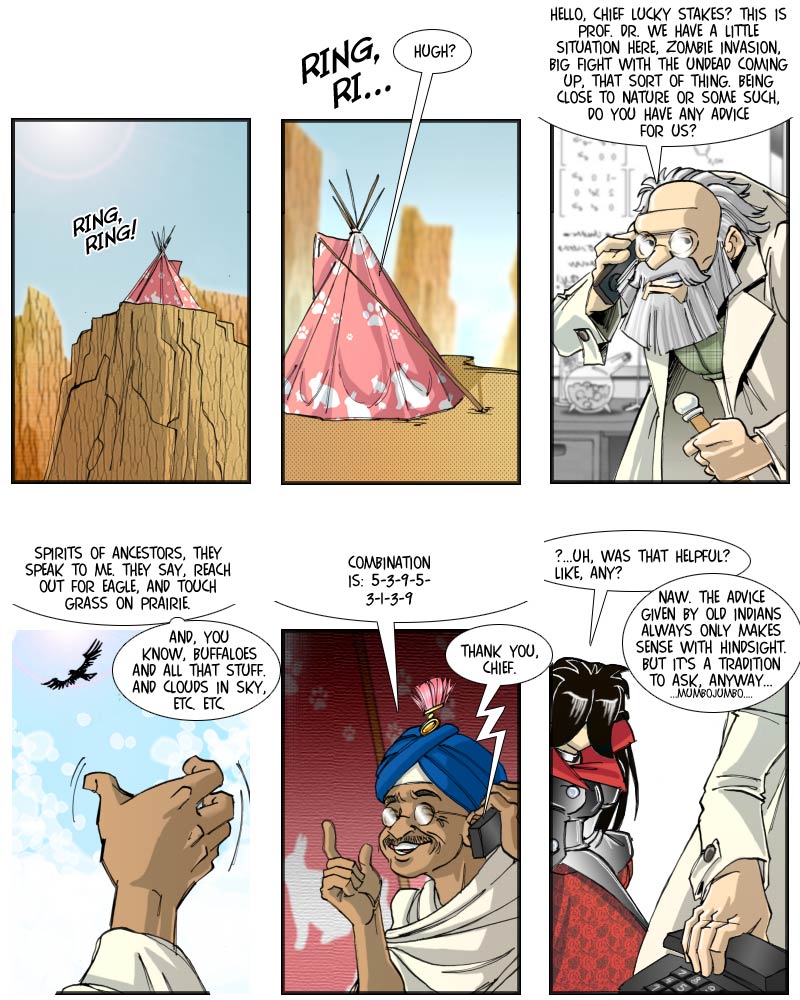 Now this is a B-movie tradition that came about a bit after the Golden Age, but to make up for that, it has been recklessly overexploited since then. It’s descent from legitimate plot device to vapid stereotype can be divided into three separate phases:

In the first phase, it usually went like this: A Native American offers some deeply knowledgeable, colourfully metaphorical advice to the protagonists. After contemplating on it and decyphering the deeper meaning, they apply the advice to the crisis in hand, at which point it proves to be invaluable.

In the second phase, the whole wise-old-Indian shtick became more and more of an obligatroy bit, and was included even in cases where the protagonists were not supposed to receive any help on their way. It then went somewhat like this: A Native American offers some deeply knowledgeable, colourfully metaphorical advice to the protagonists. After contemplating it rather superficially, they can’t make neither heads nor tails of it, and it is soon completely dropped from the plot and forgotten. However! After the protagonists successfully overcome the antagonistic difficulty and achieve their happy end, one of them suddenly remembers what the old Native American told them, and it now becomes obvious how highly applicable the advice would have been to the whole situation.

Soon, however, directors and producers realized that most of the audience wouldn’t be able to remember the advice for more than 15 minutes, anyway. (Unless it got repeated over and over again.) This offered some huge potential for saving on time in preparing the script, and launched phase three of the history of the whole plot device: A Native American offers some highly colourful, if meaningless, metaphors to the protagonists. At the end of the movie, this is then ret-conned to somehow have had some relevance to something. This is easily done by having the most nerdy female character shout out something like: “Buffaloes? That’s it! When he said ‘buffaloes’ he really meant ‘Godzilla’!” or “That thing about eagles and clouds – that was a reference to that scientist trying to steal those secret plans!” (Speaking of Godzilla, Japanese movies replace the wise, old Native American with a wise, old Polynesian. Everything else remains the same.)

And our special tip for penny-pinching movie makers: If you can’t afford an American Indian, hire an Indian Indian instead – they’ve also got that being wise and old shtick down.

Lucky Stakes isn’t a traditional Native American name, but that might yet change with time…

The Professor, of course, doesn’t think to highly of the whole tradition, it lacks scientific value in his eyes. In his opinion, there’s no need to get any closer to nature than you need to get a clean shot in.

While Snuka’s lucky streak is already over in the strip, it seems to be continuing with the voting incentives, at least for today. More on Thursday.