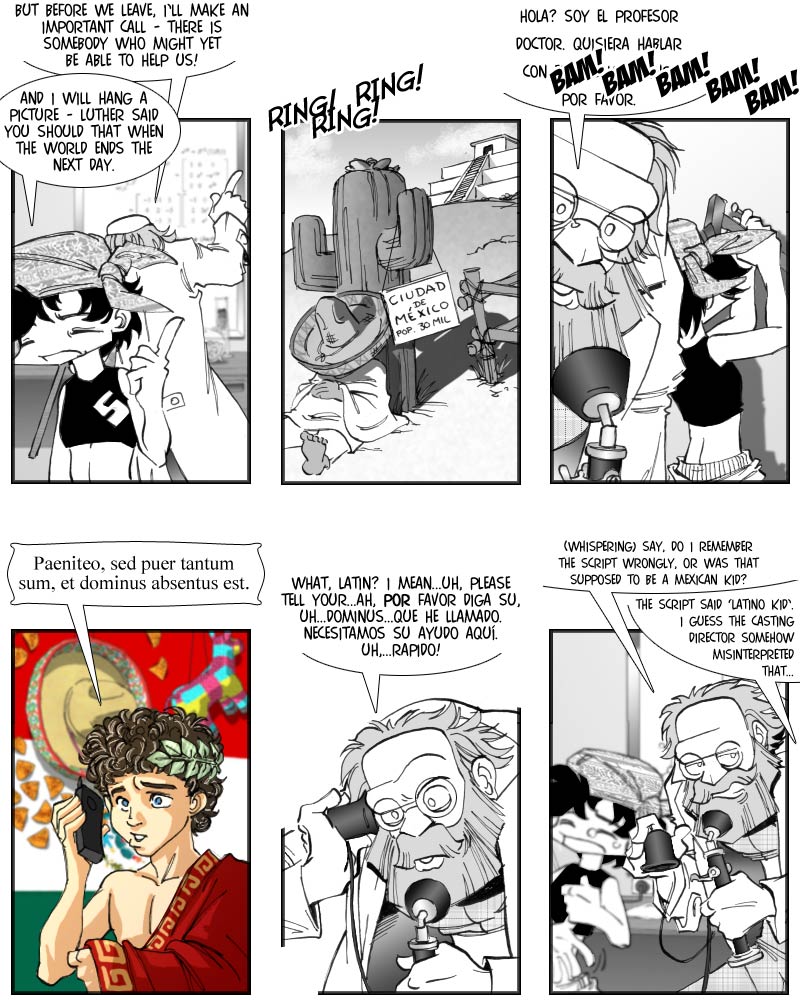 Yeah, I know…Ciudad de Mexico isn’t quite that pastoral. Try telling that to a B-movie set designer, however. There are strict rules regarding the depiction of Mexican settlements in movies – they always consist of pueblo-style, white, flat-roofed buildings, normally not more than twenty. There is also a church, or ruin of a church – if a ruin, the belltower is always still functional, though. The village is surrounded by fields and corrals, and when the protagonists enter it, it always appears completely deserted at first – save for a single Mexican sleeping in front of the cantina, with his sombrero pulled down over his face. All other inhabitants are hiding, the first one of them to appear is always the alcalde’s daughter. If the set is supposed to be depicting a larger settlement, a town rather than a village, it might have up to 30 buildings, and a Aztec pyramid. In that case, it also might have a second sleeping guy in front of the cantina. It is imperative to stick to those basics, otherwise the audience might not now where all of it is supposed to be happening.

The same goes for interior set design, as can be seen in panel four – never take any risks in that regard. If the audience is supposed to recognize that something is taking place in a room in Mexico, decorate it with the national flag, sombrero, pinata and nachos… like, you know, the way all rooms in Mexico are decorated.

As far as the Luther quote in panel one is concerned, I’m not entirely sure he said that…but he said something somewhat like that, and I needed an excuse for Snuka to start hammering and drone out part of the Professor’s sentence. Another hallowed B-movie tradition – if there’s no reasonable way around having a character state something that might give a plot point away early, find an unreasonable way, like sudden, inexplicable noise.

So, who could it be the Professor called in Mexico City? (The boy in panel four, in case it’s not obvious, just states that that person isn’t home at the moment.)

As far as Snuka is concerned, in the background of panel six … well, I didn’t say his lucky streak would go on forever.

Today’s voting incentive is based on yet another news headline. More on Monday.