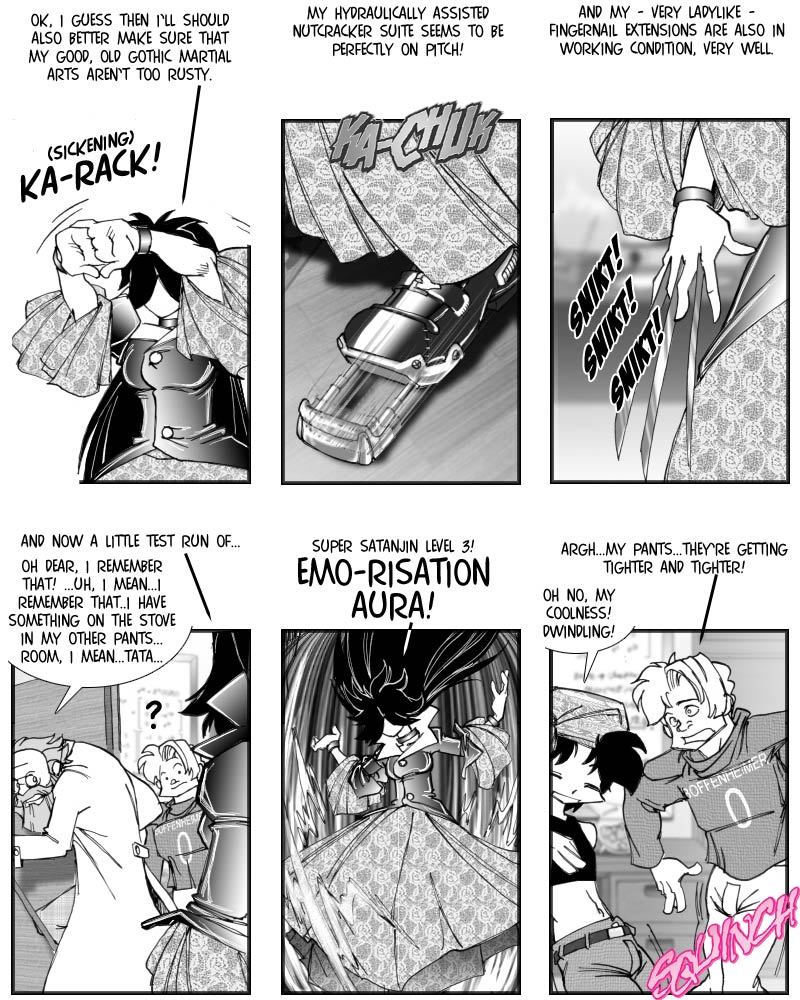 Continuing preparations for the Big Fight ™, today it’s Mopey’s turn to do her warm up laps – and in the process, she reveals that there is more to her fighting skills than meets the eye. People have kept on wondering why her kicks are that devastating for her male victims, but panel two removes any doubt on that – a little bit of hydraulic augmentation can really do wonders.

The retractable blades shown in panel three come standard with goth girls. If you think you might have seen something similar on a certain mutant, you’re quite correct. Logan openly admits that extensive surgery was performend on him at some point, but he usually doesn’t mention that he used to be a goth, berfore that. And a girl. (Explains a lot though, doesn’t it?)

And panel five reveals another secret super power possessed by the majority of female goths. Some people wonder about the relationship between goth and emo, when it’s actually quite simple: goths aren’t emo, but they cause people around them to become emo. It’s a special kind of radiation, I assume…the Professor hasn’t yet had the time to study it in depth, although he has (obviously) already learned to avoid being exposed to it. Aside from it’s mind-altering qualities, the aura’s most debilitating effect is the extreme tightness of pants it inflicts on it’s unwary victims – in fact, some people claim that the altered state of mind is actually brought on by the tight pants. Snuka takes only half damage from this attack, of course, since his pants started out so wide that even extreme shrinkage didn’t make them uncomfortably tight.

Today’s voting incentive features the Sheriff, who hasn’t been seen in the strip for a while…but good things never last. On Thursday, it’ll be the Professor’s turn to make his final preparations before moving out.