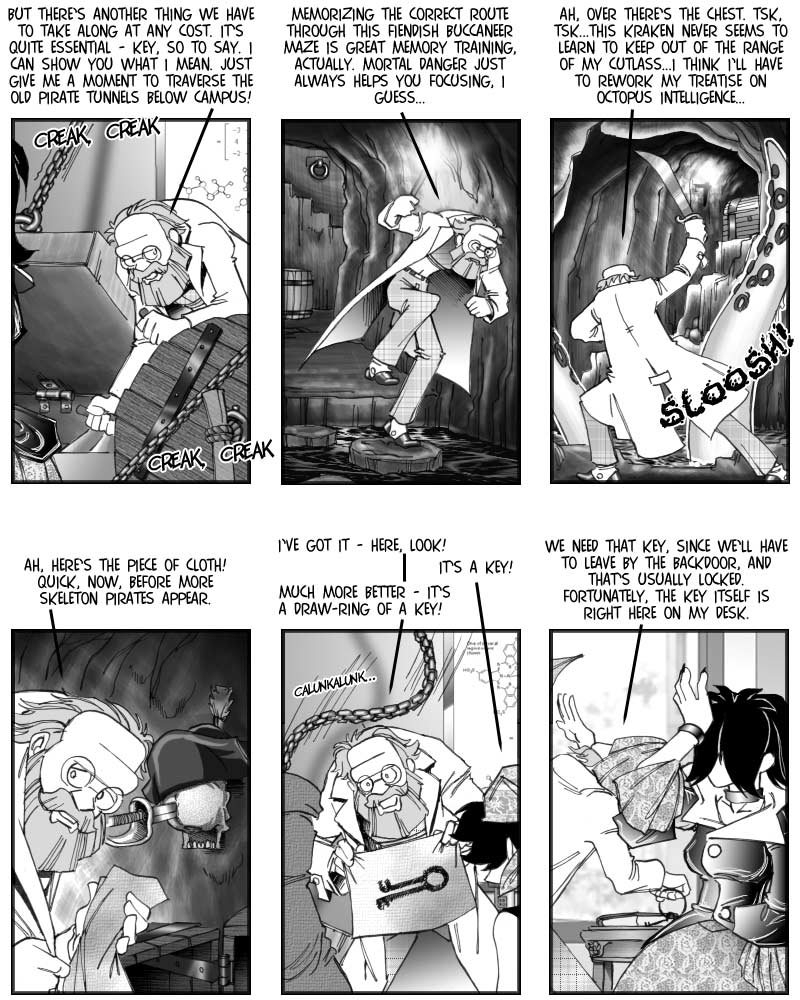 Heh, it’s somewhat unfortunate that this episode, which I originally drew in December 2006, happens to come up after the release of POTC III. It is, as you’ll probably recognize, a play on one of the elements of POTC II, more specifically the draw-ring of a key that serves as a MacGuffin througout 2/3ds of the movie.

A MacGuffin, in general, is a plot device (usually an object) that serves to advance the plot (usually by motivating characters to search/ strive for it) without actually having deeper relevance. As Alfred Hitchcock remarked: “In crime plots, it’s usually the necklace, in spy plots it’s usually the papers.” The drawing in POTC II is an unusually blatant example, however – Jack Sparrow sails all the way to Turkey and risks life and limb to get the drawing into his hands, and it never, ever really matters. I mean, it’s a drawing of a key – are there really that many people that would require some visual aid to know what a key looks like? In fact, almost all the characters even know about the key to Davey Jones’s chest, specifically, without needing to be shown a somewhat sketchy depiction of it. And it’s not like Jones would make much of a secret out of it, anyway – he seems quite happy to show off the key to anybody interested.

In effect, the scriptwriters hope that by the time the drawing drops from the plot, the audience will be so taken up by the accelerating pace of the action that nobody will notice that the drawing never served any real purpose – or start wondering why Jack even thought it would do him any good in the first place. But then, even if some people wonder, they could always blame it on Jack Sparrow’s alcoholism.

On the other hand, perhaps they were just building on the fact that most of their audience grew up with point-and-click adventure games – and would thus be used to having to travel to Tibet to get a crowbar they need to open their own garage door. The Professor, for one, doesn’t seem to consider the whole travail to be unecessary complicated, but in science, sometimes the way is the goal.

And, yes, there are pirate tunnels under the university. I had to move Lillytown closer to the sea, for the falling-of-a-cliff scene coming later, and everybody knows how seashores are riddled with pirate tunnels, pirate caves guarded by fiendish pirate traps, underground pirate harbours and so on… Sometimes I wonder why they even bothered stealing from people when it obviously was so much more work than any honest profession. Must have been for the freedom. (Cuz a pirate is free.)

A new voting incentive for today, based on another bizarre headline. More on Monday.