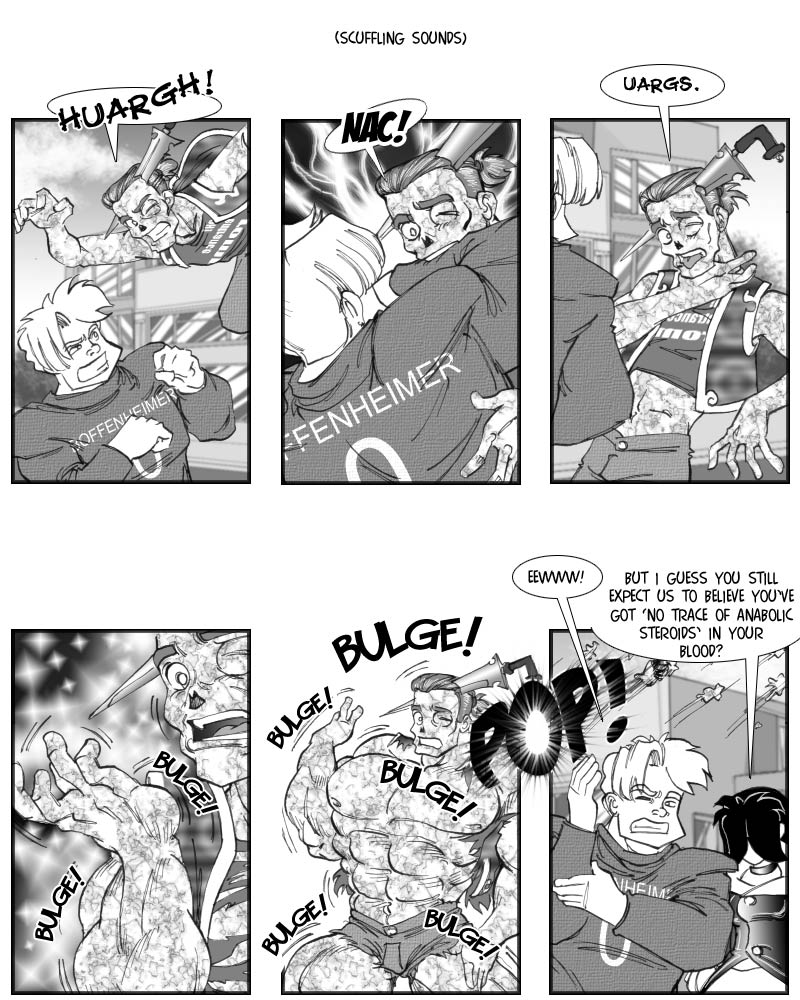 Yup, Biff certainly doesn’t belong to an ideal, balanced breakfast for our undead bretheren. He might be low in fat content, but he also lacks in nutritional brains – and then there are all those ‘healthy’ pills the coach makes Biff take. And, judged by the effect that has on that poor zombie, it seems like Biff would be hardly larger than Snuka without such pharmaceutical enhancement.

I’d like to point out that I originally drew this strip some months ago, so any resemblance to the Tour de France is purely conincidental. There’s that old slogan: “With Doping, everyone loses”, but I’m no longer sure whether that holds true…with many favourites already retired from this year’s Tour, the standings are currently lead by somebody with 28/1 odds riding on him – so there’s a chance there’ll be some pretty big winners, even.

Yes, the zombie’s got a Javanese keris through his head. For a zombie, it’s difficult to stand out from an undead horde, so I thought I’d give him something memorably exotic. I also gave him a funny shirt, but due to a mistake I made with mirroring, it’s not readable. But it was genuinely funny, I swear.

Speaking of zombism, in some books an movies zombies spread their status ailment by biting (just like vampires and werewolves), but I’m not going along with that version here…Biff as a zombie, shuffling around while moaning “braaaaiiiinnnsss” would just be too ironic. In fact, thanks to the wonder of bad continuity, the zombie’s bite won’t even leave a rip or tear in Biff’s sleeve – I’m incredibly bad at tracking that kind of thing.

Monday’s update is going to feature the making of of today’s, and today’s voting incentive features a kitteh. :3