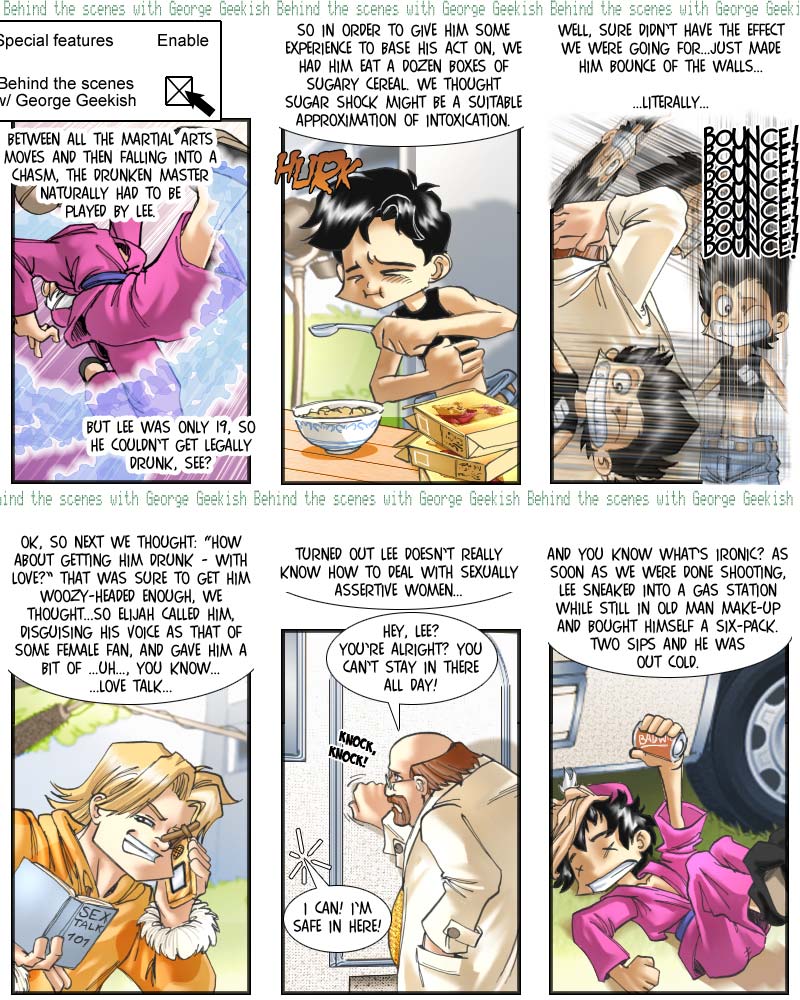 I guess it doesn’t come as much of a surprise that the drunken master was performed by Lee behind the scenes. After all, he had to display some martial arts moves, and then fall over the edge of a cliff into a bottomless chasm – who but Lee could they ever railroad into something like that? (The chasm, however, wasn’t really bottomless. Just very, very deep. And they put a glass of water at the bottom for Lee to fall into, so it wasn’t really dangerous or anything…)

And, as you see, Lee didn’t even have to really get drunk to play the part…not that I think it would have helped any. Freddie Frinton, after all, achieved fame (posthumously, in applicable countries) with his role as butler (or probably more correctly valet) James in a sketch based nearly entirely on his acting increasingly inebriated, ultimately dead drunk, in the course of it. Most likely, his intoxication act was so convincing not despite, but rather because of his being a teetotaler in real life…

Of course, there also have been some memorable “drunken” performances by actors who did get drunk for the occasion, but that doesn’t even necessarily always work. Not even to mention the cases where drunken actors tried to play sober characters – that hardly ever works. In B-movie terms, Lon Chaney Jr.’s tragic performance as a sloshed Frankenstein creature in “Tales of Tomorrow” springs to mind. Taking the (punch bowl) cake in that department, however, would be Michael Biehn – who got sued by a Russian production company after they had to shelf a whole movie project, allegedly due to his drunken antics. And, you know, when you’re considered drunk by Russian standards, you’re really drunk.