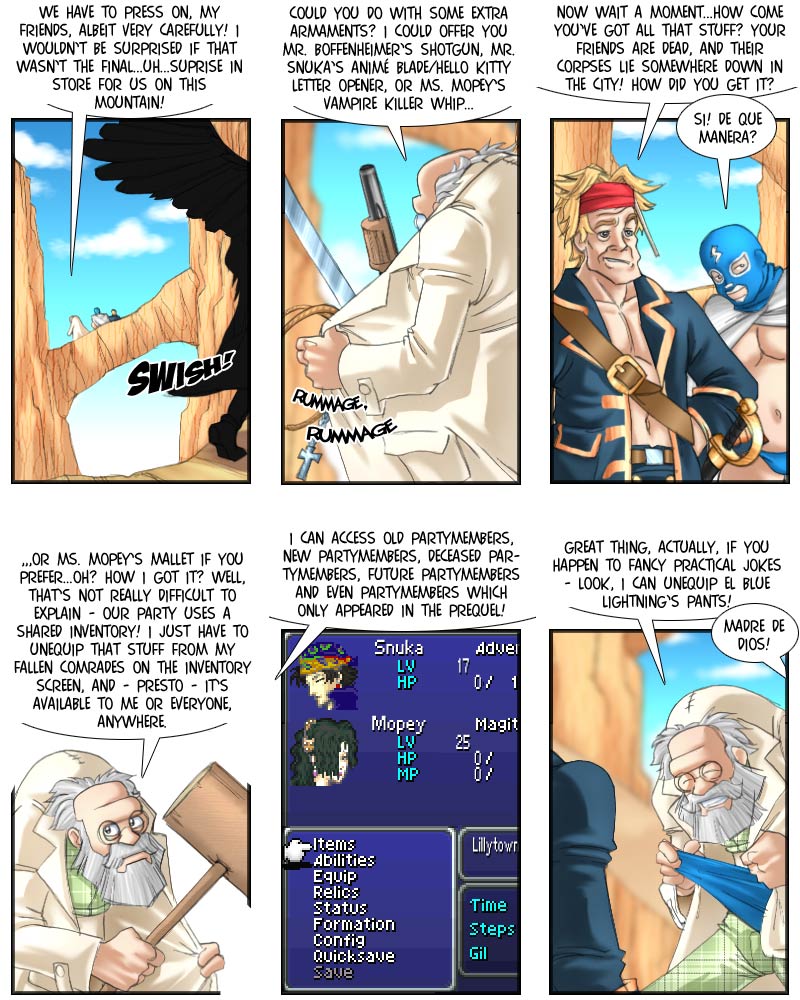 Shared Inventories are a feature of many computer or console RPG games, particular Japanese ones. All the currently unequipped items belonging to the characters of a party are pooled, and can be freely swapped and traded between the characters, much more conveniently than having separate inventories on each character. The price of that convenience, however, is the ming-boggling irrationality of some of the things you can do with that feature: most games don’t take into account if the party is split up, so you can still instantly transfer items between characters happening to be in different rooms. Or on different continents, for that matter. When two groups are independently active during the same stretch of game time, you can even transfer items back and forth in time! Sometimes, characters will gain access to the party’s pooled resources before they join up, or before they even meet the rest of the party. (In Breath of Fire, Princess Nina could easily spend most of main character Ryu’s money long before they were even introduced to each other. It’s good to be the princess, apparently.)

So, seeing how utterly illogical that all is, while conveniently making the impossible possible, I realized it would be a perfect concept for a B-movie setting. In fact, I think it’s the easiest way to explain some of the things that happen in B-movies, especially when it comes to tracking the whereabouts of key items. (Just think of Dr. Frankenstein’s diaries, for example, and try to track who had them when during the various movies, how often they got destroyed, and how they then managed to pop up again somewhere else. But then, they weren’t even able to keep the location of his lab consistent…)

The screenshot I used for panel five is from Final Fantasy VI (the GBA version). Originally, I had planned to edit portraits of Mopey and Snuka onto them, but the characters visible on the screenshot just so happened to be Terra and Locke – and I realized that they’d only need a little retouching to fit nearly perfectly. XD (Who knows, perhaps I subconsciously based Snuka’s bandana on Locke, anyway?)

Well-equipped as they now are, are our heroes now ready to confront their mysteriously silhouetted stalker? More on Monday. Also check out the new voting incentive.