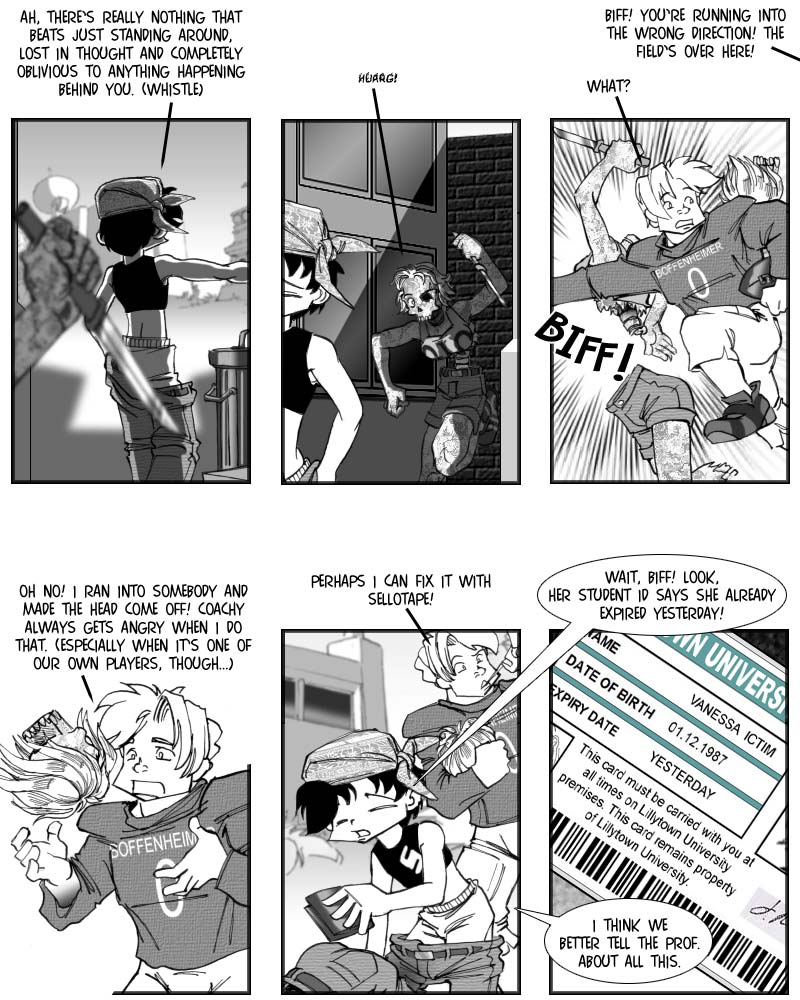 Standing around like that, completely lost in thought and oblivious to the things going on around you, can really be quite relaxing. In horror movies, of course, it’s akin to a death sentence, because they would never waste any screentime on depicting peace and quiet if it wasn’t about to be shattered. (Or, even worse, shatnered.) Snuka, of course, as a main character enjoys special privileges of not being randomly victimized, and got off easy today.

Zombies are fragile, but usually not as fragile as to just fall apart when you bump into them – however, we’re talking about Biff here, who often gets a pretty similar result when bumping into living, healthy, hunky football players. I guess it’s just part of his uncanny knack for breaking anything he touches. Interestingly, he’ll probably not be able to repair the zombie with sellotape – originally I had thought that should work, but I did a bit of research. Turns out you’re able to sellotape the head back on, but it’s just not possible to sellotape the spine and all the nerves and blood vessels back together individually. I’m stumped, I had thought the awesome power of sellotape knew no boundaries.

Given the strange circumstances surrounding the appearance of this semi-decomposed sorority girl, I guess it’s perfectly understandable that Snuka takes the girl’s wallet in order to investigate further. Admittedly, he would have also taken it under any other circumstances, but I’m just saying – this time, he’s a bit closer to the lighter side of the grey spectrum. =P The student ID in panel six is based on an actual one – yes, they have placed date of birth and expiry date right next to each other, apparently without finding that morbid in any way.

And, yeah, I guess the zombie shouldn’t really be that decomposed after expiring only yesterday…but the Sheriff forgot to pay the electricity bill for the morgue, so they’ve turned the cooling off, or something like that. Hey, and there are a lot of zombie movies were people decompose instantenously upon zombification, so it’s a genre standard, anyway.

A new voting incentive for today – something healthy. Well, it’s from a Kid’s Health site…I guess they must mean physical health, not mental health. I really can’t see how that would be healthy for a kid’s mind… More on Thursday.