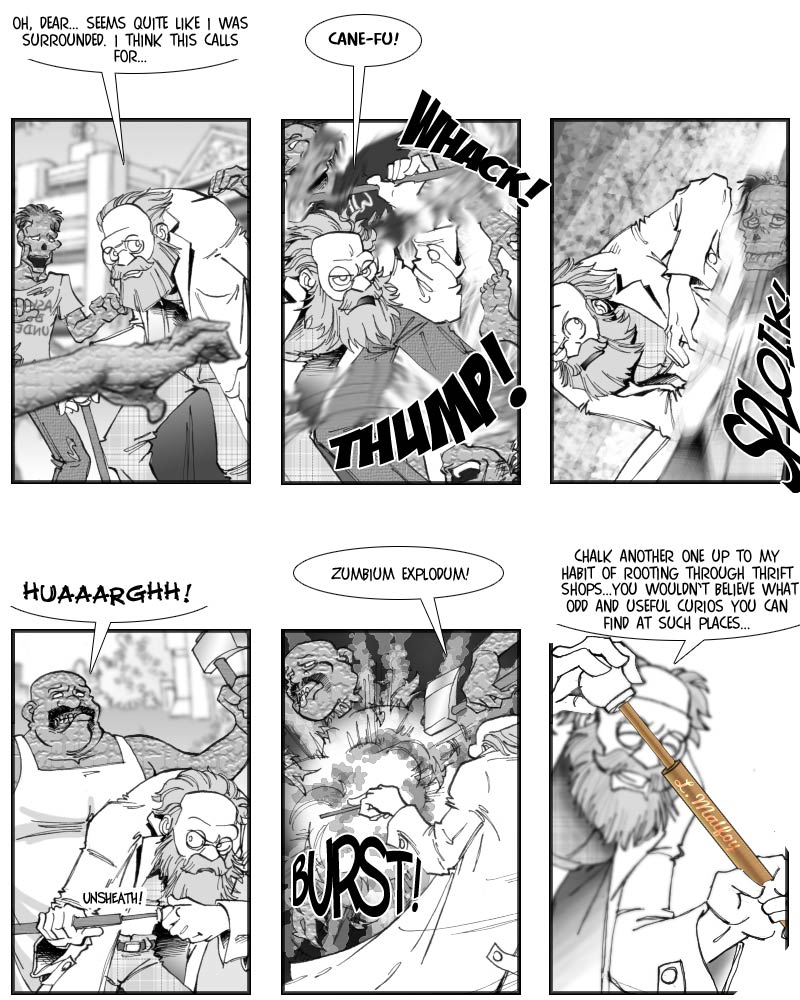 Many B-movie characters meet their end, generally off-screen, after having been shown to have been surrounded by zombies – it’s considered a honourable send-off, especially for characters who earlier had been shown to be quite able to deal with zombies under more favourable odds.

But not the Professor, of course. Since he happens to be in Lillychinatown at the moment, he profits from some B-movie rules mentioned earlier – those regarding old masters. According to these rules, his apparent age and outward appearance of frailty automatically mean that he is an insanely powerful martial artist. Since he also carries a common item not normally thought of as a weapon – a cane, in his case – he automatically gains additional ninjitsu skills in uexpectedly and masterfully using said item as a weapon.

And there’s more than one way to skin a cat, as they say*, so there also is more than one way to kill a zombie with a cane**. One of those alternative ways being by magic, obviously – and, fortunately, while he is in Lillychinatown the Professor’s perfect mastery of martial arts naturally spills over into magical ability, since the border between those two areas is verrrry fuzzy in B-movies.

Magical chants and incantations for B-movie use can be created in several different ways:

1. Fake Latin – the intellectual variant. Easily done by adding Latin-sounding suffixes like ‘um’ and ‘us’ to common words (especially effective with word from Latin roots, of course). Do not use real Latin – nobody would recognize that.

2. Obscure Language – the perfect way to make good use of crewmembers hailing from obscure countries. If you have anyone in your movie crew who speaks a really rare and little-known language, any random sentence can make a convincing magic spell/incantation. If your target audience speaks English, for example, I guess most every other language would be considered sufficiently obscure…heck, I bet you could get away with using some of the more extreme English dialects, as well. Like Liverpudlian – “Geeza purra burra furra murra” sounds more magical than “Abracadabra” any day.

3. Backmasking – the technological solution. Amongst the easiest ways to arrive at a spooky or alien sound: just record a few random phrases, and have the sound editor backmask and mix them into an eerie chant. Bonus feature: Enables you to send subliminal messages to the audience. Example: “recudorp eht naht sinep reggib a sah rotide dnuos s’eivom sihT”

If you haven’t had enough zombies for today, Gregory features on today’s new voting incentive. More on Monday.

*As they say, and keep saying, completely disregarding the fact that the vast majority of people don’t even want to think about that…

**Yeah, that how that saying works – “There is more than one way to skin a cat, so that means that obviously there are multiple ways to approach any given problem”. I’m really not sure how that’s supposed to make sense, is there any reason to assume that skinning a cat is the most intractable problem imaginable?