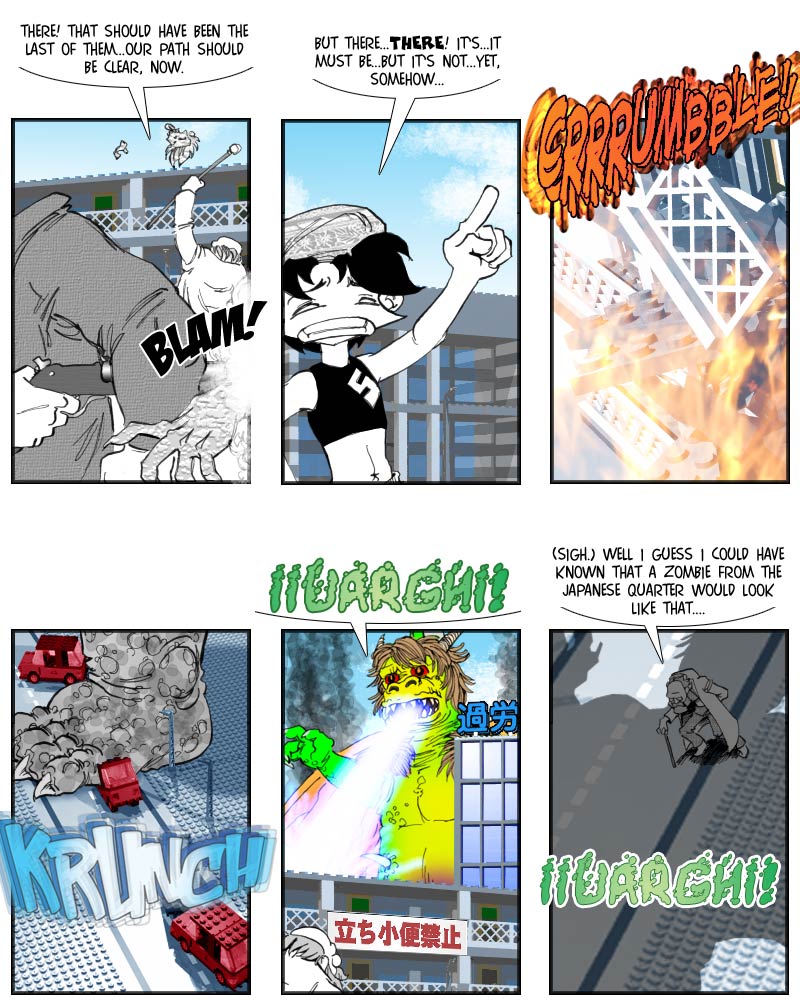 So now our heroes have moved on into the other part of Lillytown’s inexplicable generic Asian quarter: the Japanese part, Lillytokyo. And while Lillychinatown naturally was firm Kung Fu flick territory, Lillytokyo is the kaiju part of town. A kaiju, in general, is Godzilla or any monster that looks like Godzilla, but due to international trademark issues isn’t Godzilla, but you should run away like it was Godzilla. Even though it isn’t. (Naturally, the true connoiseur of the genre will only accept monsters brought to screenlife via the traditional ‘suitmation’ technology – i.e. people in rubber suits.*)

And the Professor was very right in expecting a zombie from the Japanese quarter to look like that, because monsters in Japanese B-movies end up at giant size far more often than should be reasonable. In fact, even Frankenstein’s creature turned out super-sized in one of its Japanese incarnations. Where would Dr. Frankenstein ever find a supply of body parts suitable for a 70 feet monster? Texas?

Anyhow, I’ve followed the canonical sequence for kaiju (first) appearances: First, just a reaction shot, with somebody pointing up at something in shock and fright. Then a shot of something (most often a building) being destroyed by the monster, but without any part of the monster itself on screen. Next, another shot of the monster destroying something, this time partly visible (a giant foot in the middle of stomping being par for the course). And finally, the reveal, always accompanied by the individual monster’s trademark scream/roar/grumble/call/whine/whatever.

To make for additional kaiju movie (fake) authenticity, I did the backgrounds on this strip with virtual lego. =D

How will our size-challenged heroes deal with their new giant opponent? O_O Find out on Thursday, in our next rivetting episode. (In the meantime, why not check out the new voting incentive?)

*Although some people also accept claymation – in deference to King Kong, the grandaddy of the whole monster family.