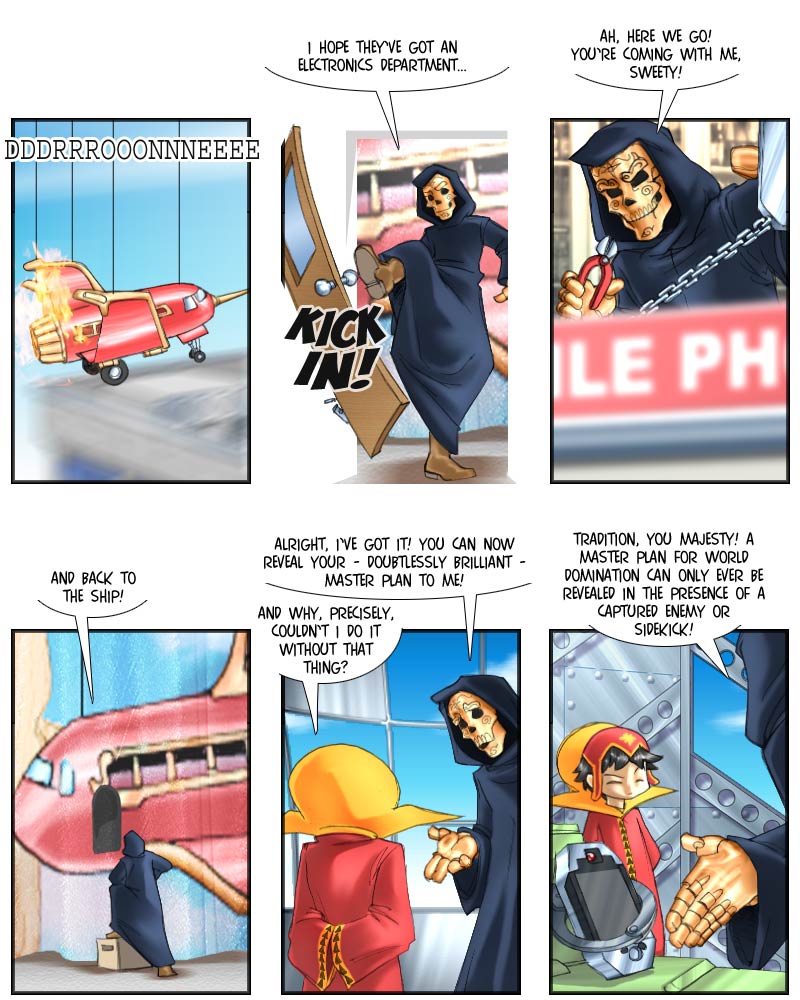 Fortunately, our lil’ Space Tyrant can always count on his right hand man, General Klytoris. He is a fully trained and publicly examined henchperson to evil – he does not only know how to fail with the odds overwhelmingly in his favour, he also knows about all of the rules, rituals and traditions of villainy. He knows, therefore, that he can’t allow his villain to just blurt out his master plan for world domination whenever he feels like it – such an occassion calls for a very specific setting.

There are two basic scenarios for this:

– if it doesn’t matter whether the heroes learn of the plan or not, there’s no need to give them an opportunity to learn of it. The only important thing is that the plan is revealed to the audience. In this case, it suffices if the villain discusses his plans in front of a random group of subordinates, co-villains, business partners, innocent hostages or relatives, laying out every last detail with evil glee, and then kills them all off in some pre-staged fashion.

– if the plan is critically dependent on the heroes not learning of it, they must be given an opportunity to learn of it. In this case it is necessary to capture either one of the heroes, or a hero’s sidekick, and explain the plan in their (helplessly tied-up) presence. After that, the hostage is not killed off, but placed in a seemingly-inescapable (but in reality readily escapable) deathtrap and left alone.

(Historically, there were more possible variants. A Civil War era villain of advanced age could, for example, just use a draft of his secret marching orders as wrapping paper for three cigars, and then absent-mindedly lose them…)

Capturing the hero, or one of the heroes, themselves might give great satisfaction to a villain, and increase their – usually already grossly inflated – smug sense of superiority – but in many cases, capturing a sidekick is the more sensible option. Heroes often have problems adapting to helplessnes, a feeling they aren’t generally very accustomed with. Sidekicks, however, are usually very professional about that kind of thing, for a sidekick who has been in the business for several years is likely to have been captured and held hostage hundreds of times. Robin, world’s premier sidekick, has been taken hostage an estimated 27,650 times over the decades, for example. A villain is really lucky if he gets to deal with Robin – you don’t even have to capture him, as such. You give him a friendly call and ask him to tie himself up and hop on over to your hideout. If you want, he’ll even pick up pizza on the way.

But that might all be a thing of the past, anyway – nowadays, you can buy a sidekick at an electronics store, and it will give away your secrets just as surely as one of the old flesh-and-blood sidekicks. >_>

A note on panel four: Yup, there’s no set for the exterior of the rocket ship, so George just projected a still frame of the model onto a curtain. If you close your eyes, you’d hardly see a difference.

That’s it for today (save for a new voting incentive), more on Thursday.