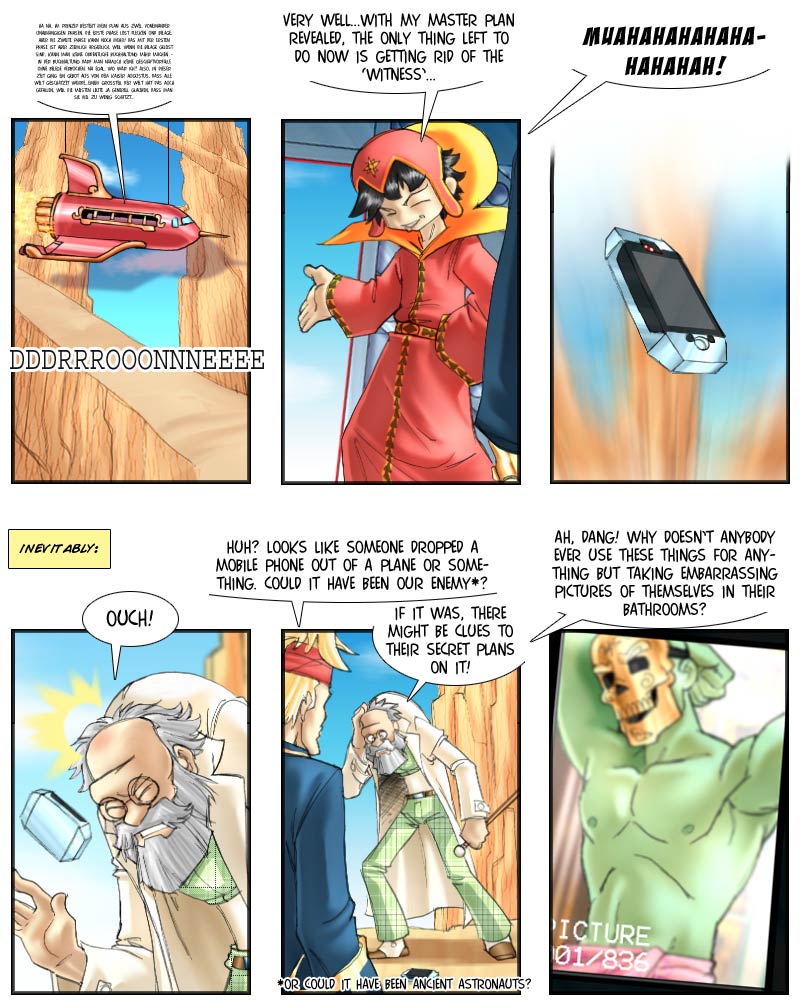 As pointed out on Monday, a villain always has to try and get rid of any ‘witness’ to the revelation of his Grand Plan for World Peace (by Ruthlessly Stifling Dissent).

And dropping out of a plane/retro-futuristic rocket ship at great height seems, at first sight, like a sufficiently final approach to ridding yourself of a sidekick (organic as well as electronic variant) – if it weren’t for plot-based probability distortion, of course! Yes, it would be highly unlikely for such a fragile device, dropped from great height over an uninhabited, mountainous landscape, to happen to land on anything that would break its fall without breaking the device itself. Even more unlikely that it would happen in such a way that the protagonists would have even the slightest chance of finding it, especially in a timely matter. But, hey, if the plot calls for it, just drop it directly on one of the heroes’ heads – it could happen, after all (in one of a trillion cases).

And, fortunately for the heroes, plot probability also affects their likelihood of correctly concluding the precise nature of such an incident. In fact, the more random and unexpected any event in a B-movie plot is, the more likely is one of the heroes able to precisely tell, at a mere glance, how it fits into the grand scheme of things – irrespective of how many more mundane and logical explanations they have to forfeit to get at that conclusion.

But, fortunately for the villains, an electronic sidekick does differ from a traditional, fleshy one in one important aspect: While the traditional sidekick, after making their successful escape, might easily give away all of the villains’ devious plans and best-kept secrets, the electronic sidekick only ever gives away embarrassing photos and videos of the villains engaging in inappropriate behaviour, usually in the bathroom. Check the internet, you’ll see it is true. >_>

Well, at least now the heroes know what Klytoris looks like under his robes – a green-skinned alien. But they could have concluded that from the budget, as well, since their just was no money for any more elaborate alien make-up. =P

More on Monday – and today’s new voting incentive couldn’t have come on a better day. O_o;