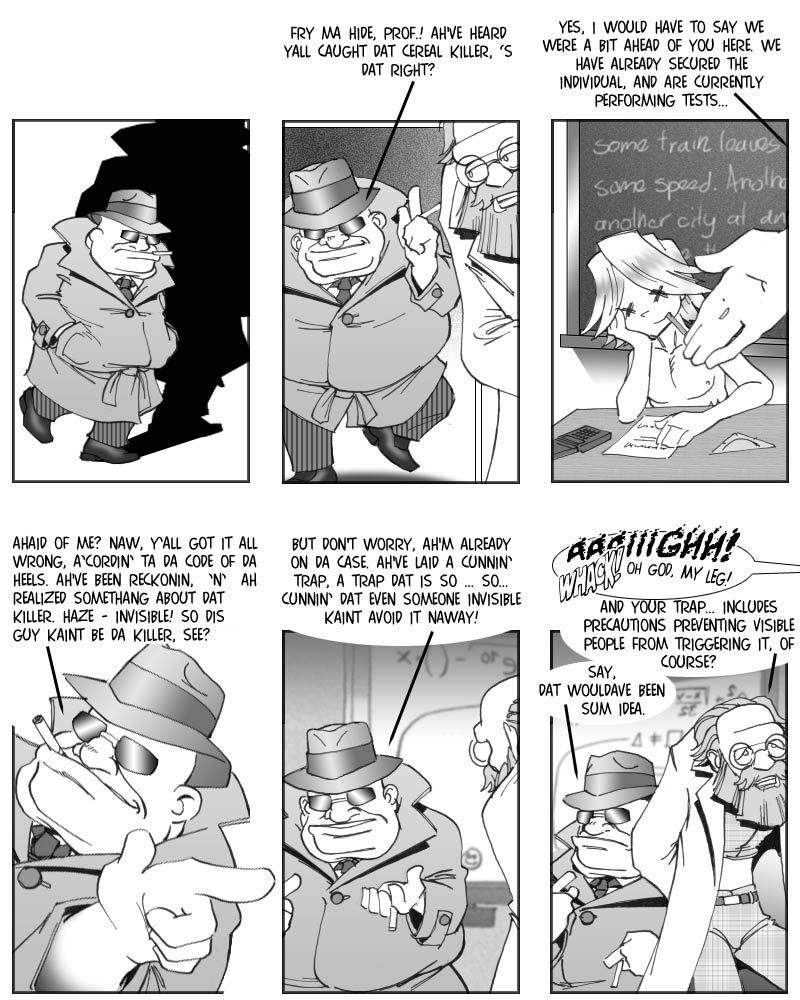 And here we again see demonstrated the great tragedy of Sheriff Ketchum – it’s not that he would not be able to draw correct conclusions at all, it’s just that he isn’t able to draw them on time. This, of course, is greatly aided by his inability to actually listen to other people. On a positive note, he shows remarkable perseverance – by his standards. In most other cases, he’d long since made some random arrest and filed the whole thing.

Oh, and the Sheriff gave up on smoking, by the way. He’s heard some rumours that it’s supposed to be bad for you. But he keeps on fiddling with an unlit cigarette, it’s just an obligatory part of gumshoe identity.

And yes, Gregory has to solve story problems in panel three. I felt that was a good way to create some feelings of sympathy for him. He might be a multiple killer, but story problems are considered cruel and unusual punishment in any and all cases. Also: the answer is 17 minutes.

Oh, and somebody noticed that the Professor was referring to Mopey as ‘Mrs.’ in Monday’s episode. Naw, Mopey isn’t married. I guess the Professor is just too old and conservative to use Ms. (which was established in the seventies- fairly recently by his standards), and Mopey has been know to critically injure people who refer to her as ‘Miss’. Or it could be just a typo. But that’s unlikely, since I never make any. =P (Thanks a lot to the person who pointed it out – I tried to answer your mail, but it failed to get through, for some reason.)

That’s all for today, more on Monday – please vote.