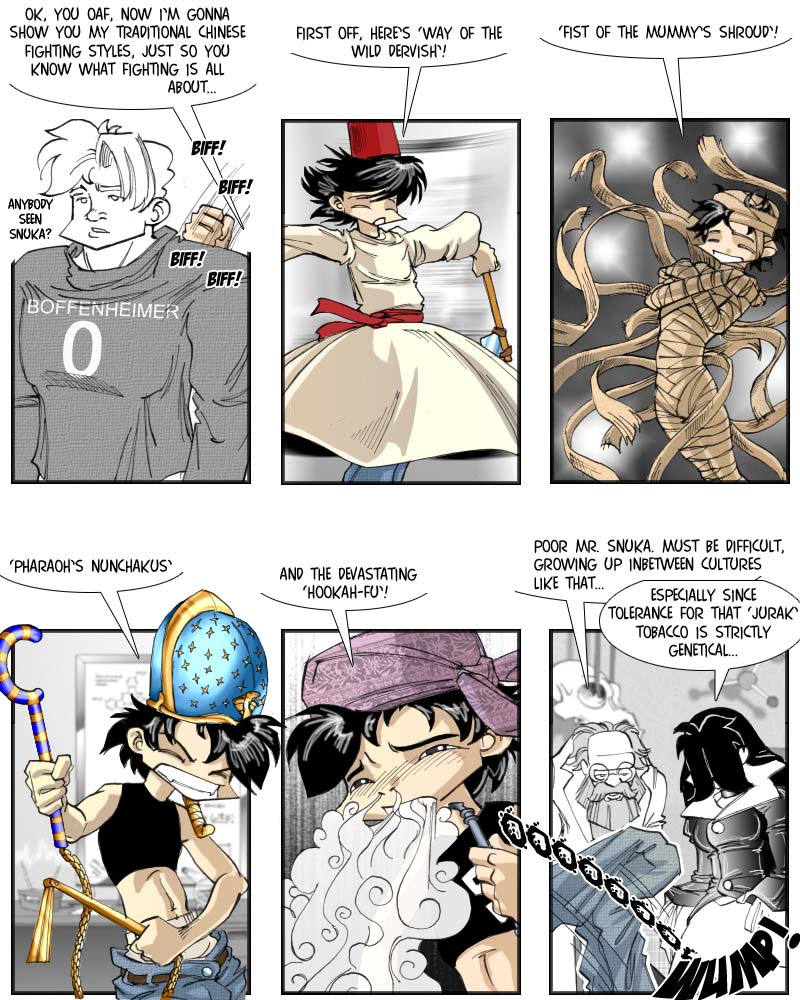 X3 This super-cute piece is by my pal Ed – check out his (and Stormy’s) epic fantasy parody cute furry full colour weekly updated webcomic here: Middlecenter. Of course, only Snuka has neko ears in canon, and the Professor gave up on surgically creating human/animal hybrids a long time ago (after what happened to his colleague, Dr. Moreau) – but aren’t Mopey and Biff just adorable with those? (And the ears match their clothes, even). And I’m sure it’ll bring good fortune, too, since Snuka’s striking the ‘lucky cat’ pose…Thanks a ton, Ed. =)

Growing up as a ‘third culture’ sort of kid gives you a lot of advantages, it is said, but Snuka here clearly demonstrates one of the drawbacks: hopelessly muddled cultural references. In his case, the problem is acerbated by the fact that he is supposed to fill a stock Chinese role in the group. And while he has a strong Chinese/Japanese cultural identity, he doesn’t actually know a lot about it – he’s Egyptian, after all…

And there’s just no escaping genetics, in some regards: Snuka will never be able to stomach ‘Jurak’ any more than hard cheese…but then, nobody who’s family hasn’t been milling around the Nile valley for more than ten generations will ever be able to. Might be worth the wait, though – Hookah-Fu is one of the most powerful martial arts styles around. The breath attack, specifically, is ranked between ‘Red Dragon’ and ‘Godzilla’, making it the second-most effective breath weapon in fiction – far more powerful than other ethnic breath attacks like garlic salami, et al. (That one works great against vampires, however.)

Like the last one, this strip was originially all-grayscale – however, since I gave Biff a colour treatment for his demonstration of traditional American martial arts, I felt it would only be fair to give Snuka the same chance to look good. And, while Snuka might be down at the moment, he is definitely not yet out – do not be deceived into misunderestimating him. His fuzzily delineated Asian heritage has a few more tricks up the (stereotypically oversized) sleeve.

Today’s voting incentive, once again, matches the strip quite well by coincidence, featuring as it does a character from the first chapter, set in Egypt. More on Thursday.