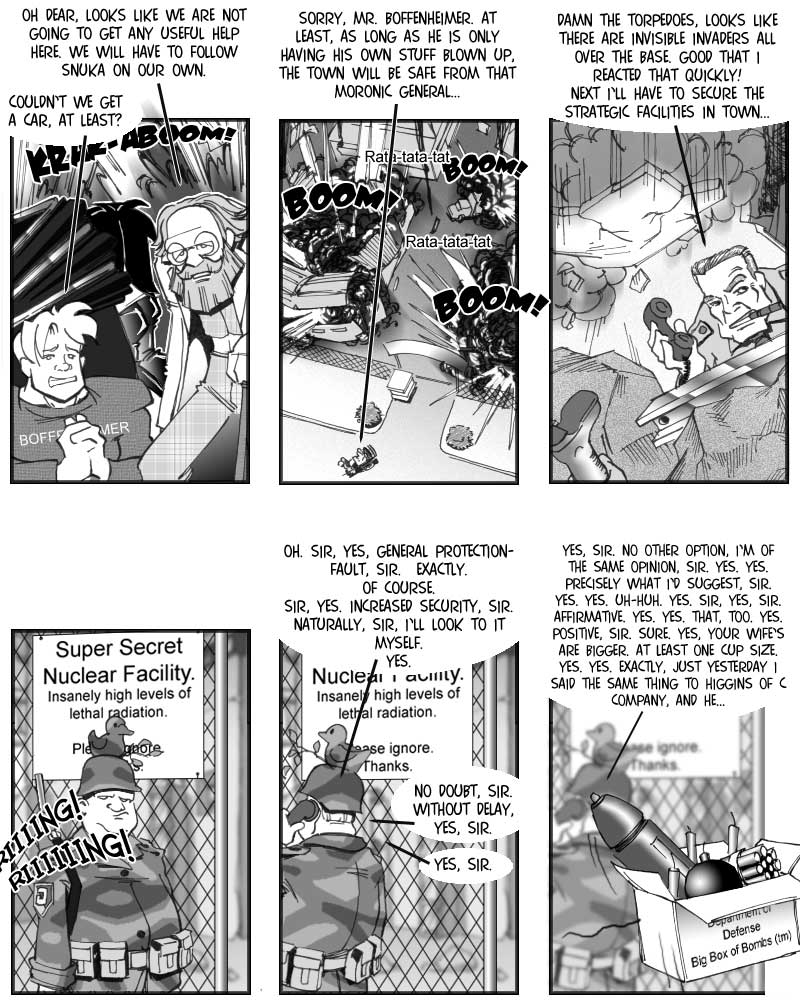 As you can see in panel two, Professor Doctor has still not entirely fathomed the potential of modern telecommunication equipment. Gone are the days of mounted couriers and semaphores, when commanding officers were a grave danger mostly to their immediate surroundings only. Nowadays, thanks to the magic of the telephone, they can mess up faraway places at a moment’s notice. And that goes for ‘progress’.

The conversation between General Protectionfault and Sergeant Yesman demonstrates why the general is so popular with his troops – he never calls just to give orders, he always has the time for a little chat. For that reason, morale is exemplary in his command, and his orders are obeyed without question. Which is rather sad, given the quality of his orders…well, can’t have everything in an officer, I guess.

By the way, I’m aware that ‘Damn the torpedoes’ is more of a naval thing to say, I just couldn’t think of a suitable Army equivalent.

The Big Box of Bombs visible in panel six is part of a Department of Defense initiative to increase tactical flexibility. Instead of packing explosives by type, the Big Box of Bombs contains samples of the most popular explosives of each type, to suit a wide range of tactical requirements. With each Big Box of Bombs, you get 0,5 l of a soft-drink of your choice, and a limited-edition toy. Collect them all, and be the envy of your fellow soldiers.

On Thursday, Snuka will…well, you can probably guess. Please vote. At least he will live on in ‘Irregular Webcomic’…